India have absolutely no interest in slow accumulation or letting Sri Lanka think they have any sort of momentum. Shafali (46* off 33) and Harmanpreet (15 off 13) punished the bowlers, trying to reduce this total as quickly as they could. Harmanpreet gets caught out in the 10th over trying to smash some more runs, but at the moment it’s not a concern and Jemimah Rodrigues comes to the crease to continue where her captain left off.

With a perfect record from the round matches, they’re not relying on their net run rate to get them through, but they’re having a stab at increasing it just for the hell of it. All the talk was naturally about the home team coming into the tournament, but this Indian team are looking exceptionally hard to beat right now.

It’s just hit 5pm and things have got fast and furious, with a number of new matches underway in all codes and corners of the country. Let’s catch up on a quick around the grounds!

The A-League has just started in Newcastle with the Jets taking on Perth Glory and the score is 0-0.

In the W-League, Melbourne Victory are hosting Sydney FC and the score there is – you guessed it – 0-0.

The Super W match between the Reds and Rebels is well underway and the Reds are dominating – up 19-3. Averyl Mitchell scored two early tries to put them ahead.

India looked like they were thinking about playing it safe, but the idea didn’t last for long, Smriti Mandhana smashing 17 from 12 before being dismissed in the fifth over. They’ve pushed the run rate up to 7.29 – much higher than required. They want this game over quickly it seems. Shafali Verma is ticking along nicely with 16 from 16 with Harmanpreet Kaur joining her at the crease.

A clinical win from Geelong in the end, who pushed ahead in the second quarter and looked after their lead for the rest of the match. Some possible trouble for both sides as the result of a clash late in the third quarter – Jordan Ivey took Katie Brennan high and may have a case to answer. A good team performance from the Cats overall, with eight goal scorers sharing the load between them.

AFLM: A nice piece during the week from Jonathan Horn about the nostalgia brought about by the Victoria v All Stars charity match and its shades of State of Origin times of old.


Too often, the talent-laden Victorian sides came a cropper. In 1990, when they were beaten by New South Wales, it was like losing to Greenland in a Test cricket match. “State of Embarrassment” was the headline in The Age.

Geelong just getting on with the job in Bendigo, quietly accumulating and Richmond play catch up. The Cats are doing a great job of stifling Sabrina Frederick, who has been limited in her impact with defenders all over her wherever she goes. Richelle Cranston has been the key to the Cats’ attack, with 13 disposals, seven kicks and two goals.

After another wicket from Radha Yadav to round out an incredible four overs at 4-23, Nilakshika Silva and Kaveesha Dilhari gave it their all for a few overs before Silva was out, skying possibly the highest ball I’ve ever seen hit. Sathya Sandeepani comes and goes straight out next ball, bowled by a beautiful ball from Shika Pandey. Pandey nearly has another next ball, but it falls just wide of the keeper to be safe. Dilhari finishes with a lovely four to give Sri Lanka a little bit of hope -they have scrapped every run they can manage, but it doesn’t look like they’ve made par on this wicket and will have to bowl very well indeed to get a win from here.

Netball: An injury in the AFLW that has wider implications with Collingwood dual-code star Ash Brazill going down with a suspected ACL rupture. It would be devastating news for the club on two fronts, with Brazill one of their best players in both football and netball. Magpies Netball are already scrambling to replace the irreplaceable Nat Medhurst after the goal attack announced her pregnancy at the start of the year. Losing Brazill as well will put the club under incredible pressure.

With Brazill unable to play for the Australian Diamonds in the bushfire charity match in Sydney tomorrow, Gabi Simpson has been shifted over from the All Stars team, while Amy Parmenter gets the call up to replace Simpson.

Cycling: A fascinating read from Kieran Pender this week, taking us behind the scenes on Australia’s preparations for the Track Cycling World Championships.


The Australians are always among the first to arrive at international competitions; only New Zealand landed in Berlin before them. “After long flights we get a lot of stiffness, so any pre-existing conditions can be irritated,” says the team physiotherapist Patrick Custance. “The first day or two we want to get them active and moving, plus doing lots of stretching and soft-tissue work.” Following a quiet Friday, nervous energy is building in the squad as they await their first track session.”

As suspected, Sri Lanka have struggled since losing Atapattu. With the run rate currently at 5.38 and wickets falling regularly, they will have to hope for an extremely waggy tail and put on a strong bowling performance to have a hope of taking down this dominant Indian team. Radha Yadav has been the pick of India’s bowlers so far, with 3-19 and one over left to bowl.

Richmond scored early in the quarter and looked like they were hitting their straps, but Geelong hit back repeatedly to assert their dominance. Georgia Clarke has been strong with the boot, kicking two goals for the Cats in the quarter. Monique Conti has looked like the Tigers’ best, but they’ll need a full team performance to stop the Cats taking the premiership points.

Cricket: It’s been almost an under the radar tour of South Africa for the Australian men – with matches taking place in the middle of the night and being overshadowed by the drama of the women’s T20 World Cup back at home. But it’s an interesting return to the scene of the sandpaper crime, as Sam Perry ruminated during the week.

Boxing: A fascinating read from Stephanie Convery during the week, previewing her soon to be released book After the Count.


Mention concussion in a boxing gym and you are met with a squirming, uncomfortable silence. Sometimes there are nods, a murmured hrm, before your fellow conversationalist slides quietly away. If someone feels trapped, they may bust out a bit of bro-science: It’s just one of those things. It’s just a bit of conditioning. Don’t worry too much about it. Shake it off. Keep your chin down and your guard up, you’ll be fine.

A sensational ball from Rajeshwari Gayakwad means that Madhavi has to go for 12 and Hansima Karunarathna comes to the crease, with the desired effect for India of slowing down the scoring rate. She is not turning the strike over as well as Madhavi did and is taking some time to find her feet. As soon as Atapattu is back on strike she smashes a beautiful six, then tries to follow it up with another, falls short and is caught on the boundary, out for 33. That’s a huge blow for Sri Lanka.

This match is at tight as the ladder suggests it should be so far. Highly defensive and a little bit scrappy, you get the feeling that whoever ultimate takes this one out will need to grind out a win, rather than glide to victory. Courtney Wakefield got Geelong on the board early, while Kate Darby scored Richmond’s goal mid-quarter. Richmond will need to tighten up their discipline to take this one out, giving away six free kicks in the first quarter.

A nice early wicket for India has put Sri Lanka under some pressure, but while Chamari Atapattu remains out there, Sri Lanka are in with a chance. Harshitha Madhavi is playing a good support role at present, with eight runs from eight balls, turning the strike over nicely.

T20 World Cup: Here’s the AAP match report for that incredible game, it really was a great escape from New Zealand. The Australian team will have had a close eye on that and will be looking to exploit all those batting weaknesses on Monday.

New Zealand have escaped with a 17-run win from their women’s Twenty20 World Cup clash with Bangladesh after being given an almighty scare. The White Ferns managed to defend a paltry 91 after batting first at Melbourne’s Junction Oval, restricting Bangladesh to 74. But the Kiwis will have to seriously improve on Monday for their sudden-death showdown against Australia, with the winner moving onto the semi-finals.

Bangladesh’s chase wasn’t helped by key batter Nigar Sultana retiring hurt after she top-edged a shot into her helmet. Sultana appeared to be in severe pain around her neck and was taken from the field on a motorised cart, but later returned to the crease. Bangladesh were in the game at 2-31, but lost 7-27 after Sultana went down and were bowled out in the final over.

All of the White Ferns bowlers performed strongly, but Hayley Jensen was the pick of them with an accurate spell of 3-11.

“We didn’t really bat too well there, but we know we’re Kiwis and we scrap to the last ball so it was a really good bowling performance,” Jensen said. “I just kept it really simple, just hit the seam and bowl stump-to-stump. We know that we’ve done all the work so we’ll just go into training and come out confident for the next match.”

During New Zealand’s innings, star batters Sophie Devine and Rachel Priest put on a 36-run opening stand, but the Kiwis then suffered an extraordinary collapse of 8-36 to be all-out in the 19th over.

Playing in her first World Cup match, Bangladesh’s Ritu Moni destroyed the Kiwis with figures of 4-18.

T20 World Cup: The match between India and Sri Lanka is about to get underway, but earlier today New Zealand escaped a huge scare against Bangladesh to come away with the win. Led by a sensational 4-18 from Mst Ritu Moni, the Bangladesh bowlers restricted the White Ferns to 91 from their overs. Unfortunately (for them and Australia) they weren’t able to back up with the performance with the bat, all out for 74 in 19.5 overs. Hayley Jensen was the player of the match for the Ferns, with a desperate 3-11 that saved that game and kept their tournament alive.

Hello, happy Mardi Gras and welcome to another edition of Sportwatch! I’m your host, Megan Maurice and I’ll be with you all afternoon until my esteemed colleague Richard Parkin jumps in to see you through the evening.

What a day we have ahead of us! There’s more sport than you can poke a stick at, from the T20 World Cup to AFLW, a bit of Super W and Super Rugby, some W-League and A-League and the only NRL trial match that matters – the Charity Shield between the Dragons and Bunnies in Mudgee.

We’ve got plenty to get through, so let’s get into it and see where Leap Day takes us.

Odion Ighalo's stay at Manchester United drawing to a close 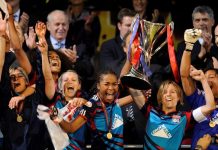 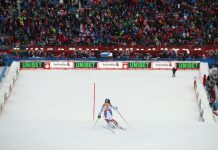 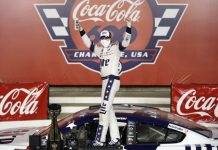 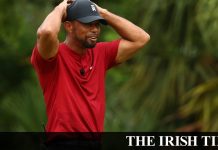 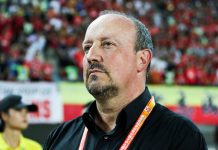