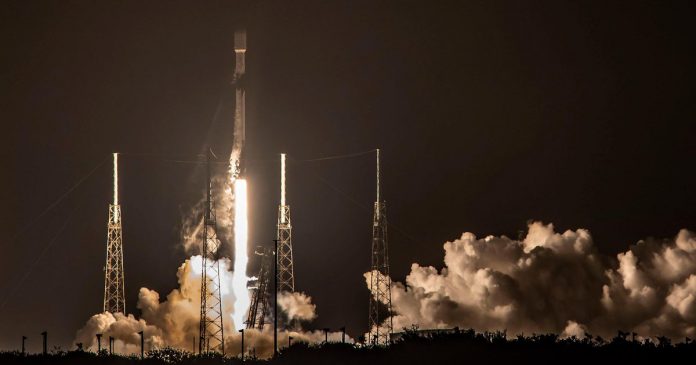 After successfully sending another batch of its Starlink broadband satellites into orbit Monday night from Cape Canaveral Space Force Station, SpaceX appears to have missed the landing of its Falcon 9 first stage booster for the first time in a year.

On the livestream of the mission, a flash is seen just to the side of the droneship at the moment the booster should be landing, although no rocket ever enters the frame.

SpaceX has not yet confirmed the fate of the Falcon 9, but it seems very likely it crashed in the ocean. In the process, it appears to have spared three seagulls that were hanging out on the landing pad and may never understand how close they came to being barbecued.

The Falcon 9 itself had a decent life, completing six launches successfully, but only five landings in its career.

The apparent hard water landing comes almost exactly a year after the same thing happened at the end of an earlier Starlink mission on Feb. 17, 2020. Every landing attempt in between has been successful (for Falcon 9, that is. Definitely not counting Starship testing in Texas).

Next up, SpaceX has only a little more than 24 hours before its next Starlink flight. The 20th batch of satellites is set to blast off from adjacent Kennedy Space Center on Tuesday at 9:55 p.m. PT (12:55 a.m. Wednesday ET).

The company had planned to launch two batches of Starlinks from Florida within hours of each other earlier this month, but one of these missions was postponed. (That launch is now scheduled for Tuesday night.)

These launches and the droneship landings that follow them are becoming pretty routine for SpaceX, but Musk would like to see the pace of launches increase. The permit from the FCC for Starlink to operate requires that at least 2,212 of its satellites be operational by March of next year.

So far, over 1,000 of the small satellites have been sent to space, but it’s not clear how many of those are currently operational. Regardless, it would seem that if SpaceX can pull off at least two Starlink launches per month, it should be able to hit its target.

Only two Starlink missions have been flown thus far in 2021, but the company can quickly get up to speed if it nails both missions this week.

Of course, these launches have been known to slip.

Whenever the next launch is imminent, we will embed the livestream here. It typically goes live about ten minutes before launch.

Follow CNET’s 2021 Space Calendar to stay up to date with all the latest space news this year. You can even add it to your own Google Calendar.