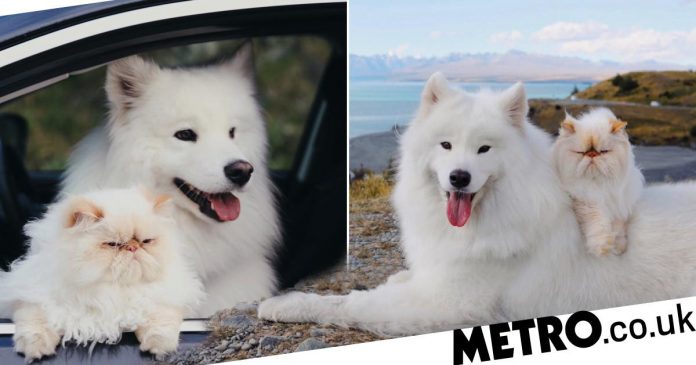 Cats and dogs are known for having a complicated relationship.

However, a smiley canine and a grumpy feline have become Instagram stars due to their adorable friendship.

Casper – a six-year-old Samoyed dog – loves to have his Persian cat brother, Romeo, by his side. And, despite his less-than-happy appearance, two-year-old Romeo enjoys it too.

The fluffy white siblings both live in Christchurch, New Zealand, with their 29-year-old owner Rinsa Li. 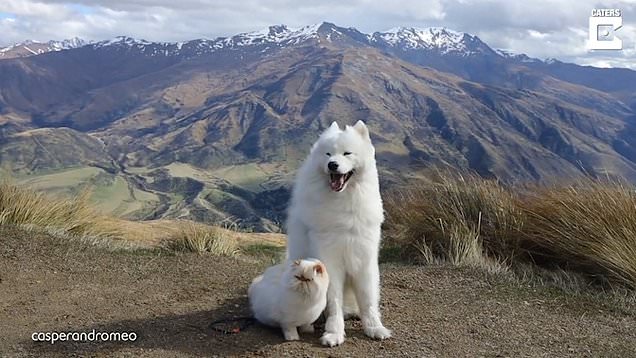 Casper and Romeo have gained quite the social media following due to their expressive faces – with more than 68,000 followers on their joint Instagram account @casperandromeo, which documents their day-to-day life.

Rinsa said: ‘It’s so humbling that a cat and a dog’s relationship can bring so many smiles across the world.

‘I think people really relate to Casper and Romeo’s contrasting personalities and share this with their loved ones.

‘People describe Romeo’s expression as “before coffee” while Casper’s as “after coffee.” Or Romeo as “Mondays” while Casper as “weekend.”‘

Rinsa, who is a photographer and ceramicist, says she always wanted to own a cat – but wasn’t sure how Casper would react to a new family member.

However, after taking Casper to see a friend’s kitty, Rinsa was reassured that he would be gentle and sweet.

She said: ‘After that, all my doubt disappeared, and I decided to start looking for my dream cat – and I found Romeo.’

It wasn’t until she started taking photos of the pair together that she noticed their contrasting expressions.

Rinsa added: ‘Their personalities are also very different. Casper is like an extroverted person – he likes a lot of people. Romeo is the introvert in their relationship. He prefers one-to-one contact.’

But despite their differences, the animals are still best buddies and absolutely adore one another.

Rinsa said: ’There’s a lot of times when I wake up early, I see Romeo cuddled in with Casper in his dog bed – the cutest thing ever.’


MORE : The best dog-friendly festivals to take your four-legged friend this summer


MORE : How to spot and treat hay fever in dogs 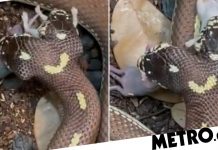 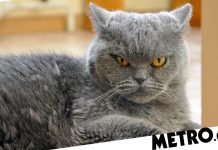 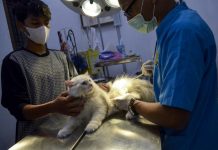 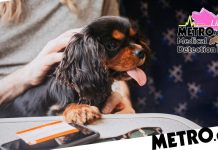