Shackled Love and Maythehorsebwithu, separated by half a length in Saturday’s $100,000 Private Terms at Laurel Park, could wind up meeting again for their next starts in the April 17 $125,000 Federico Tesio at the Laurel, Md., racetrack.

The 1 1/8-mile Tesio, headlining a program of seven stakes worth $750,000 in purses, once again serves as a ‘Win and In’ qualifier for Triple Crown-nominated horses to the $1 million Preakness Stakes (G1) May 15 at Pimlico Race Course.

Neither Shackled Love nor Maythehorsebwithu were among the 326 horses nominated to the Triple Crown for $300 by the initial Jan. 23 deadline. Horses can be nominated again by Monday, March 29 for a $6,000 fee.

Trainer Gary Capuano said that ZWP Stable, Inc. and Non Stop Stable’s Maryland homebred Shackled Love, a son of 2011 Preakness winner Shackleford, emerged from the race well. It was the first stakes attempt for the bay gelding, who was the second-longest shot in the seven-horse Private Terms at odds of 21-1.

“He’s good. He came out of the race good. It was a good race, a good effort,” Capuano said. “He’s a good-feeling, nice kind of horse. He’s definitely been improving quite a bit.

“It’s amazing how things sometimes work out,” he added. “We stuck him in and looked at the race. His numbers fit with the race and he’s been improving, so it was worth taking a shot. He had a good post position, the whole thing. It looked like he could be competitive in there if he ran his race.”

After winning in debut last fall at Delaware Park, Shackled Love had lost four straight races with back-to-back seconds entering the Private Terms. He pressed pacesetting even-money favorite Maythehorsebwithu from the gate, took a narrow lead in mid-stretch and dug in to the wire.

“He had been training good. It was a solid field and his numbers had been improving each race even though he’s been beat,” Capuano said. “He got beat by a couple of those but he’s been improving and training well, so it was worth taking a shot at it. We would have liked going through another condition first, but it works out better this way. If you’re going to lose your condition you might as well lose it in a stake for $100,000. It’s all good.”

Next up for Shackled Love is the Tesio, a race Capuano won in 2003 with Cherokee’s Boy, also bred and owned by ZWP Stable. Cherokee’s Boy won 19 times, 14 in stakes including the 2005 Salvator Mile Handicap (G3), from 48 starts and more than $1 million in purse earnings, and ran eighth in the Preakness.

“I would think so, as long as he comes out of race good and trains good. I don’t see why we wouldn’t,” Capuano said. “There’s no other races for 3-year-olds, you have to run in a stake anyway. He’s in the same boat as Shackqueenking and Brittany’s horse. You have to run in the stake or you don’t run for a while.”

Pocket 3’s Racing’s Shackqueenking, nose winner of the 1 1/16-mile Howard County to cap his juvenile season, moved into a contending position on the far turn but was unable to gain any ground and wound up fourth, beaten a total of 3 ½ lengths.

“He ran good. He just hung there the last part. He had every opportunity turning for home, but the other two they were just running comfortable,” Capuano said. “He’s got a tendency to hang a little bit the last eight of a mile anyway, so we tried to get him moving so we could get some momentum and he did that but then he just kind of hung there the last part. He got beat three or four lengths which wasn’t terrible.”

Michael Dubb and Bethlehem Stables’ Maythehorsebwithu was making his two-turn debut in the about 1 1/16-mile Private Terms off a dominant four-length score over multiple stakes winner Kenny Had a Notion – trained by Capuano’s older brother, Dale – in the one-mile Miracle Wood Feb. 20.

Ridden by Sheldon Russell, Maythehorsebwithu set a pace of 23.97 and 47.44 seconds before grudgingly yielding the lead, then came back on again after being passed.

“I thought he had him and then you see Gary’s horse like, ‘No, not now. I’ve got you.’ It was a good horse race. You have to give them both a lot of credit. They both ran big,” trainer Brittany Russell said. “Absolutely, we’re delighted. Another big effort. He’s consistent and he runs hard every time, so what’s not to be happy about?”

Maythehorsebwithu has done his best running at Laurel, with two wins and two seconds from four starts. He was beaten a neck by Kenny Had a Notion in the seven-furlong Spectacular Bid Jan. 16 to kick off his sophomore season and is also headed toward the Tesio.

“More than likely. We’ll get him back to the track and see how he is. I’m definitely going to give him an easy couple weeks here, if he allows it,” Brittany Russell said. “This morning, he was laying down in his stall. He was exhausted. That’s probably the first time I’ve noticed him do that after a run. We’ll just let him kind of catch his breath and make a plan, but why wouldn’t we try? He’s doing nothing wrong in the afternoon.”

Russell reported that Madaket Stables, Ten Strike Racing, Michael Kisber and Black Cloud Racing Stable’s Whereshetoldmetogo was doing well after opening his 6-year-old campaign with a victory in Saturday’s $75,000 Not For Love for Maryland-bred/sired horses that marked his third consecutive win, all in stakes.

Despite never switching over to his right lead, Whereshetoldmetogo ran six furlongs in 1:09.82 to win the Not For Love by 2 ½ lengths as the 1-5 favorite in a field of seven.

“He’s the greatest. We love him. He ran so good. It’s tough because you watch these races sometimes where you’re the heavy favorite like that and it just seems like you’re not a lock,” Russell said. “Things can happen. Regardless, he steps up and gets the job done. Left lead and all, he did it.”

Next up for local sprinters is the $100,000 Frank Y. Whiteley going seven furlongs on the Tesio undercard April 17. Whereshetoldmetogo won the Whiteley, contested at six furlongs and rescheduled to Nov. 28 amid the coronavirus pandemic.

“I haven’t spoken to anybody yet but I would love to keep him home,” Russell said. “He obviously likes it here, and keep a good thing going.”

Joel Politi’s Littlestitious, a determined half-length winner of Saturday’s $100,000 Beyond the Wire for 3-year-old fillies, remains at Laurel after shipping in from Louisiana for trainer Tom Amoss to earn her second career stakes victory.

Laurel has been under restrictions after a horse tested positive for the equine herpesvirus March 8, but no additional cases of EHV1 have been identified by the Maryland Jockey Club.

“She came out of the race in good shape. I spoke to the barn early this morning. We’re trying to determine what stage we’re in with the herpes [virus],” Amoss said. “That’s going to have a lot to do with what our plans are. We know that we’re there for another week, minimum with the horse, but that’s just a logistics thing.

“Other than that, she came out of the race in good shape. We’re really pleased with the way she ran. We think that there’s a real future there as the races go a little further in distance and she transitions back to two turns, which is what we’re going to do in the next start.”

Littlestitious, under Sheldon Russell, came with a steady run down the center of the track after tracking pacesetting favorites Street Lute and Fraudulent Charge, and edged the latter in the final sixteenth of a mile to win by a half-length. Street Lute, a six-time stakes winner including five in a row, wound up third as the 3-5 favorite in her first race beyond seven furlongs.

“I had great respect for the favorite in that race. I mean, what a record she had going in. I did not know how the race was going to play out [but was] confident in the sense that I thought our horse would run her race, but whether it was good enough against the other horses there, that was unclear,” Amoss said. “Watching the race unfold and watching the way she ran, I give a great deal of credit to the rider. He rode her really, really well.” 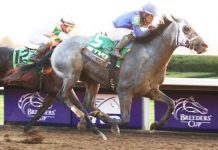