A couple of horses that competed in the Sept. 5 Kentucky Derby are strong possibilities for the Grade 3, $200,000 Oklahoma Derby that will be run on Sunday, Sept. 27, at Remington Park in Oklahoma City, Okla.

Stakes coordinator Don Thompson said Major Fed and Necker Island are two of the contenders from the Kentucky Derby that are possible to be in the gate for the 32nd running of the Oklahoma Derby. Two other Kentucky Derby competitors were nominated for the race as well – NY Traffic and Mr. Big News, who ran third to Authentic and Tiz the Law.

“NY Traffic is either going to the Preakness or coming here,” said Thompson.

Among other horses that Thompson said were possibilities for the Oklahoma Derby were Avant Garde, Dean Martini and Shared Sense.

Here’s a look at those most possible for the Oklahoma Derby, contested at 1 1/8 miles, the headline event on a stakes-laden program on the final Sunday afternoon of this month:

Major Fed
Owned by Lloyd Madison Farms IV, trained by Gregory Foley… Went off 43-1 in the Kentucky Derby and had a troubled trip. During the race, he was jostled and then stuck in traffic most the way in the 15-horse field. Prior to the “run for the roses,” this 3-year-old colt by Ghostzapper, out of the Smart Strike mare, Bobby’s Babe, was a maiden winner, but had been extremely competitive in several graded stakes races. He ran second to Shared Sense in the Grade 3, $300,000 Indiana Derby on July 8, a strong closing fourth to Wells Bayou in the Grade 2, $1 million Louisiana Derby on March 21 at Fair Grounds (NY Traffic ran second in that race), and second in the Grade 2, $400,000 Risen Star Stakes on Feb. 15 at Fair Grounds to Modernist. James Graham had the mount in the Kentucky Derby. He rode Lone Sailor to an Oklahoma Derby win in 2018.

Necker Island
Owned by Raymond Daniels, Wayne Scherr and Will Harbut Racing, trained by Chris Hartman… Went off at 49-1 in the Kentucky Derby and finished ninth after an eight-wide trip down the lane. Jockey Miguel Mena rode the 3-year-old colt in Louisville, Ky. Prior to the Kentucky Derby, he had finished third in the Grade 3, $300,000 Indiana Derby to Shared Sense and third in the $200,000 Ellis Park Derby to Art Collector, who figured to be one of the favorites in the Kentucky Derby, but was scratched. This son of Hard Spun, out of the Mr. Greeley mare Jenny’s Rocket, garnered a lot of the spotlight in Kentucky with his African American owners, Daniels and Greg Harbut, who got their message to the public about the importance of equality in America, and in the sport of horse racing.

Shared Sense
Owned by Godolphin Racing  and trained by Brad Cox, this colt by Street Sense, out of the Bernardini mare, Collective, won the Grade 3, $300,000 Indiana Derby and has been first or second in five-of-nine starts lifetime. He has not been out since running fifth to Art Collector in the $200,000 Ellis Park Derby. Florent Geroux has been his regular rider. When Godolphin took this horse off the Kentucky Derby trail, Brad Cox said he would train the horse up to a fall campaign with the Oklahoma Derby as a consideration, according to the Paulick Report.

Avant Garde
Owned by Gelfenstein Farm of Ocala, Fla., trained by Jesus Lander. This gelded son of Tonalist, out of the Afleet Alex mare Dancing Afleet, is riding a four-race win streak at Gulfstream Park in Hallandale, Fla. He has been winning easily, but all four victories have come in lesser company than he would face in a stakes race. Jockey Luis Reyes has been his rider in all four wins.

Dean Martini
Owned by Raise the BAR Racing and David Bernsen, who also owns a computer wagering business in Point Loma, Calif. Trained by Tom Amoss. This 3-year-old gelding by Cairo Prince, out of the Friends Lake mare Soundwave, won the Grade 3, $500,000 Ohio Derby at Thistledown on June 27 with jockey James Graham aboard. He followed that with a sixth place run in the Ellis Park Derby.

Horses nominated to the Oklahoma Derby who already reside and train at Remington Park include: Liam, a maiden who was second, beaten two lengths, in a maiden special event here Aug. 29; Rowdy Yates, a two-time stakes winner here as a 2-year-old in 2019, he was fourth in both the Ohio Derby and the Ellis Park Derby this summer; and Tonaltalitarian, broke his maiden here on Sept. 10 by 3-1/4 lengths and is trained by Donnie Von Hemel, a three-time winner of the Oklahoma Derby.

Past performances of Oklahoma Derby nominations 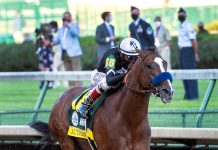 Maryland Apprentice Marquez Heading To New York, To Team Up With Cordero