Even in the face of all-time greatness and unprecedented longevity that has spanned 27 remarkable years, time is undefeated and it will eventually come for us all. With every passing day, the end of Serena Williams’ professional tennis career draws alarmingly near and the chances of one final, spectacular result fades.

In what is likely the penultimate tournament of her great career, Williams bowed out of the Western and Southern Open in her opening round match with a grim performance, emphatically losing 6-4, 6-0 to a spotless Emma Raducanu who did not put a foot wrong throughout.

After an unwelcome one-day delay, Williams and Raducanu finally arrived on Tuesday evening with tightly packed crowds lining the grounds and peeking out from the overlooking stadium court to catch a glimpse of the American great before her match. When Williams arrived in the stadium, the audience offered her a standing ovation.

This was a battle of distant generations with 21 years separating 40-year-old Williams from 19-year-old Raducanu. But after a career characterised by countless comebacks, Williams’ one-year absence from the tour after last year’s Wimbledon has so far proved too long for her to regain her best form.

Williams opened the match with a horrendous opening service game, striking four errors in a row and losing the first five points of the match as she immediately fell down a break. It set the tone for a dire performance until the end as she once again struggled desperately to establish any timing on her groundstrokes and her significantly diminished movement meant she was a sitting duck whenever Raducanu took control.

After a year of constant attention following her US Open victory, for Raducanu this was a rare opportunity as, for once, all cameras and eyes were focused on her opponent across the net.

Without expectations or inhibitions, Raducanu played a faultless match. She soaked up Williams’ first strikes, patiently tested her opponent’s shot tolerance in extended rallies and whenever the ball dropped short, attacked without hesitation, exposing Williams’ greatly diminished movement. She ended the match with just a single unforced error along with 14 winners.

“[This] may be one of the last opportunities I get to play her,” she said. “You have to cherish the moment, and you’re going to have this memory for the rest of your career. I was just really trying to make the most out of every single point out there and give myself the best memories of when I played Serena once.”

Despite her glee, Raducanu reacted to her victory with an extremely understated celebration, barely even clenching a fist as Williams’ forehand flew long. “To be honest, I was just in awe. I think I said one ‘come on’ in the match, and I was just saying to myself, because I respect her so much as an athlete, as a tennis player, as a person,” she said.

In Toronto last week, a day after Williams announced that the countdown to the end of her career had begun, she was defeated in straight sets by Belinda Bencic. After the loss, she remained for a rare loser’s on-court interview and barely held back tears as she said goodbye to Canada.

This time, despite the organisers lining up champagne by the court, there was no ceremony or silver lining. Williams packed her bags and left in a flash, her frustration clear for all to see. She did not attend her post-match press conference afterwards.

Only one tournament of Williams’ career remains, and this is far from how she envisioned the end. She will now head to the US Open, and for the madness that awaits her there in her final event, having won just one match in her three singles tournaments back.

“I think we all need to just honour Serena and her amazing career,” said Raducanu. “I’m so grateful for this experience to play her and for our careers to have crossed over. Everything she achieved is inspirational and it was a true honour to share the court with her.”

For Raducanu, an unlikely opportunity to face a player who was a hall of famer before she even existed ended like a dream. She will always be able to say that she stared down Serena Williams on-court and departed with a win.

For her efforts, Raducanu will next face another of the most successful players of the last decade in the second round as former No 1 Victoria Azarenka awaits. Due to Raducanu also playing doubles alongside Elena Rybakina on Wednesday, she faces a brutal turnaround as the pair will face each other in the second match on Centre Court despite Raducanu’s later finish.

“Obviously with the last year I have had, getting great exposure to these great players, and every time you get to play them, you get to learn from them as well and what they do really well that has helped them in their careers,” she said. “Yeah, it’s going to be a tough match tomorrow, for sure.” 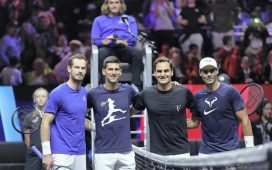 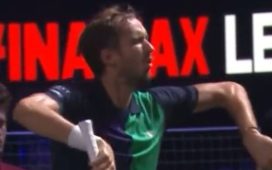