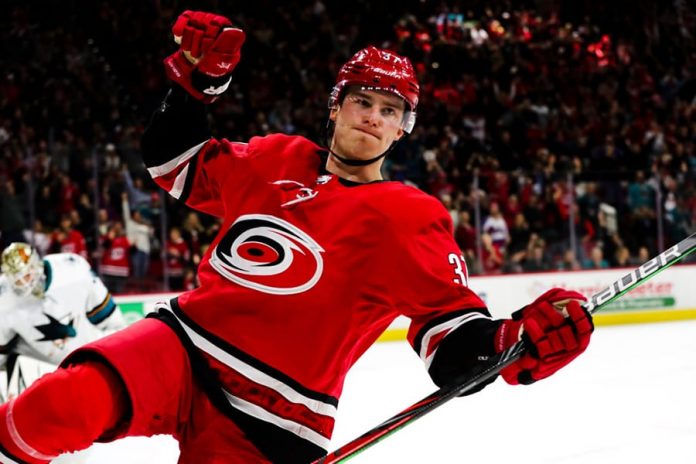 Andrei Svechnikov’s rise has been well documented in Carolina, but he’s among a group of sophomores who have found another level this season. Here’s a look at four other second-year studs who have stood out in 2019-20. 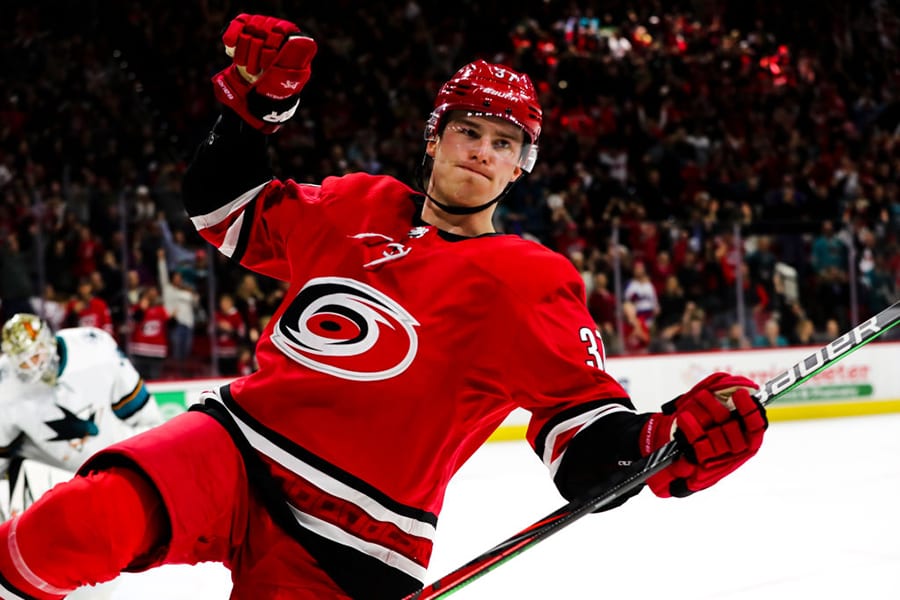 It’s been a crazy few months for Andrei Svechnikov in Carolina.

Last season, Svechnikov’s 20 goals and 37 points put him fifth in Hurricanes scoring and seventh among rookies league-wide, but he largely a forgotten freshman by the time the Calder Trophy votes were tallied, finishing seventh in voting and appearing on only 18 total ballots. But Svechnikov, the second-overall pick in 2018, has started to showcase why he was such a coveted prospect heading into his draft and why his modest rookie output wasn’t anything to be worried about.

Even ignoring his two highlight-reel lacrosse goals, Svechnikov has kept his name in the headlines for his stout play for a team on the playoff bubble that, if it had been healthy all season long, would likely already have secured a safe spot in the Metropolitan Division. Paired alongside Sebastian Aho and Teuvo Teravainen, Svechnikov has been one-third of one of the most dangerous lines in the NHL, with the unit boasting a wild 70 percent goals percentage as a trio at five-a-side. Among forwards with at least 700 minutes of 5-on-5 ice time, Svechnikov has a 57.7 Corsi percentage, good for second in Carolina and fifth in the NHL. His 2.46 points-per-60 (33rd) and 1.49 assists-per-60 (29th) has shot him up the league’s scoring race, and he’s only going to get better from here.

But you know all about Svechnikov. He’s had no lack of coverage this season, and with good reason. He’s among a group of sophomores who have found their games this year after quiet, or rather ineffective, rookie seasons. Here’s a look at four other second-year studs who have stood out in 2019-20:

Conor Garland, RW, 23 (Arizona Coyotes)
We’ve already profiled Garland’s goal-scoring exploits earlier this season. Since then, he’s hit the 20-goal mark and is on pace for around 45-50 points for the Coyotes. Not too shabby. Playing on a line with Barrett Hayton and Phil Kessel as of late, Garland is second in Coyotes scoring since Jan. 1 with eight goals and 18 points in 24 games, trailing former NHL MVP Taylor Hall by three points. Among players with at least 700 minutes of 5-on-5 ice time this season, Garland’s 1.25 goals-per-60 is tied for 16th in the league, with only Chicago Blackhawks rookie Dominik Kubalik (1.8, tops in the NHL) boasting a higher rate than Garland among forwards with less than 12 minutes of five-a-side ice time per game. Garland may not grab a lot of assists, but he’s the second-line goal-scorer for which most teams would hope.

Robert Thomas, C, 20 (St. Louis Blues)
Last season, Thomas made the Blues out of training camp and played a minor role for the eventual Stanley Cup champions, recording nine goals and 33 points as a bottom-six hand. This season, Thomas already has 39 points and his ice time has been bumped to 14:29 from 13:04 the campaign prior. Per 60 minutes at 5-on-5, his 2.63 points is good for 16th among all players to have skated at least 700 minutes. Thomas’ potential likely sees him top out as a middle-six forward who can score in the neighborhood of 45 points per season, but that’s still very valuable.

Sean Walker, D, 25 (Los Angeles Kings)
Few things have worked out well for the Kings this season, but Walker, an undrafted college free agent signed two summers ago (and one who didn’t have many NCAA options to begin with), sure has. Walker earned a 39-game taste of the NHL last season and has emerged as one of Los Angeles’ best players in a tough season for the franchise. Currently sitting at 22 points, Walker was one of the best possession players to kick off the season and his 56.12 Corsi-for percentage at 5-on-5 is still quite impressive. Walker’s main defense partner, Alec Martinez, was shipped out at the deadline, but Walker has exceeded all expectations this season.

Ryan Graves, D, 24 (Colorado Avalanche)
Cale Makar may be the big star on the Avalanche’s blueline, but his defense partner, Graves, deserves a lot of credit. One year ago, Graves was a bottom-pairing rookie who averaged 11 minutes per night across his 26-game NHL audition. He’s up to 18 minutes per game this season, and with a goals above expected of 3.8 (third among defensemen with 300 minutes of 5-on-5 action) and 25 points overall, he’s getting the job done. Even though plus-minus is a highly criticized stat, it’s worth noting Graves is first in the league at plus-41. Not bad for someone who needed four years of AHL duty before getting a full-time shot in the NHL.

Steven Ellis is a Digital Content Producer for The Hockey News. He spends his free time listening to music you wouldn’t like and watches obnoxiously-long motor races.