Sainthood winning the Pennine Ridge, moved from the turf to a sloppy main track at Belmont Park

Grade 1 Kentucky Derby-participant Sainthood was expected to make his turf debut on Saturday, but instead the Mshawish colt capitalized on a race moved to the main track. Sainthood earned his first stakes win by besting The Reds in a stretch duel for a one-length score in the Grade 3, $200,000 Pennine Ridge at 1 1/8 miles for sophomores at Belmont Park.

The seventh running of the Pennine Ridge, originally slated for two turns on the inner turf course, was moved to a one-turn dirt contest due to heavy rain earlier in the day. It was automatically downgraded to Grade 3 because of the surface switch, although the American Graded Stakes Committee will review this year’s running to consider reinstatement of its original grade.

Winstar Farm and CHC’s Sainthood, making his first start since running 11th in the “Run for the Roses” for Hall of Fame trainer Todd Pletcher, broke sharp under jockey Joel Rosario, leading the pared-down five-horse field through the opening quarter-mile in 24.75 seconds on the sloppy and sealed track.

Shawdyshawdyshawdy, who tracked in second position, challenged the pacesetter under Hall of Fame rider John Velazquez from the rail and earned the lead, posting a half-mile in 48.56.

Rosario urged Sainthood up approaching the far turn, overtaking Shawdyshawdyshawdy from the outside. But The Reds, under Kendrick Carmouche, kept pressing from the outside, with the duo linking up at the top of the stretch and challenging eye-to-eye into the last furlong. Sainthood responded to Rosario’s left-handed encouragement, gaining separation near the final sixteenth and repelling The Reds’ re-rally attempt to complete the course in 1:50.57.

“He handled it [the slop] well. He broke on top and I was just looking to follow somebody,” Rosario said. “He was moving really well and I know the other horse [The Reds] had the jump on me, but I kept riding and I was hoping he would fight back and he did.

“I thought maybe he got me, but I knew I hadn’t asked him for everything he got, so I knew he’d have a little more in the end,” he added.

Sainthood, who broke his maiden at second asking in February on dirt at Fair Grounds before running second in the G3 Jack Ruby Steaks on Tapeta in March at Turfway Park in his Derby prep, improved to 2-2-0 in five starts and more than doubled his bankroll to $201,900.

“I think he’s a versatile colt, much like his sire Mshawish, who we trained and won graded stakes on dirt and turf for us,” Pletcher said. “This horse has run well on dirt and synthetic and slop today. I thought he actually ran a solid race in the Derby. He didn’t disgrace himself by any means for a colt as lightly raced as he was. His two works here on the turf I thought were pretty impressive. We came into today hoping to get him on the turf, but it’s also great to have one as versatile as he is who can run on just about anything.”

Sainthood, the 4-5 favorite, returned $3.80 on a $2 win wager. Pletcher said the effort could facilitate a start in the Grade 1, $1 million Belmont Derby going 1 1/4 miles on turf in the opener of the Turf Triple series for sophomores on Saturday, July 10 at Belmont.

“We got a good prep for it if we decide to go that way,” Pletcher said. “It’s good to have a horse with this many options. We’ll talk to the team and come up with a plan, but that will be towards the top of the list.”

Flanagan Racing’s The Reds traveled wide throughout after exiting from the outermost post 5. Trained by John Kimmel, The Reds finished five lengths clear of Shawdyshawdyshawdy in his first start since being elevated from second to first in the Federico Tesio in April at Pimlico Race Course after Excellorator’s disqualification.

“The post didn’t cost him, the best horse won the race,” Carmouche said. “Just no pace. My horse ran well, if we had a little more pace it would have been better for him.”

Safe Conduct and Minuteman completed the order of finish.

Live racing continues Sunday with a nine-race card and a 1 p.m. Eastern first post. The $100,000 Paradise Creek for 3-year-olds going seven furlongs on the Widener turf course is slated for Race 8 at 4:40 p.m.

Starting on May 1, Belmont Park re-opened to a limited number of spectators. All admission must be purchased in advance at nyra.com/belmont/tickets/.

For comprehensive information on health and safety protocols in effect for the Belmont Park spring/summer meet, please visit: https://www.nyra.com/belmont/visit/plan-your-visit. 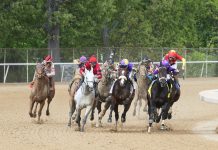