Buckingham Palace never bestowed a knighthood on Roger Hunt for services to England’s finest moment but he could cherish the honour regardless. “I never needed it” was his take on whether the 1966 World Cup winners should all have been knighted. “I was knighted by the Kop. That means more.”

Hunt, who has died at the age of 83, will for ever be known as “Sir Roger” to the generation of Liverpool fans who experienced the club’s lasting transformation under Bill Shankly. And to many more who followed – including Jürgen Klopp, who wrote to Hunt on his 80th birthday in 2018 expressing admiration and gratitude for what the legendary forward achieved in a Liverpool shirt. It is an extensive list featuring the Second Division championship, two First Division titles, the FA Cup and the considerable feat of remaining the club’s leading goalscorer for eight consecutive seasons.

In many respects the man from Glazebury, Cheshire, encapsulated both Liverpool’s rise and the influence of the manager who made it all happen. Even now, decades on and a procession of trophies and world-class talents later, no one has scored more league goals for Liverpool than Hunt. He scored 245 times in the league, 285 goals in 492 appearances for the club in total and, while Ian Rush may have overtaken his all-time goalscoring record, Hunt’s elevated place in Anfield folklore is secure. As it is in the annals of English football history.

It was Hunt’s instinctive celebration, it has been suggested, that swayed the Azerbaijani linesman Tofiq Bahramov into awarding Geoff Hurst’s controversial second goal against West Germany at Wembley in the final. Hunt was the closest England player to the ball when it crashed down off the crossbar. He threw his arms aloft rather than attempt to convert the rebound and always maintained it had crossed the line.

Not up for debate, but often overlooked, was the extensive contribution the Liverpool striker made to the entire World Cup campaign. Hunt was the only England forward to start all six matches for Alf Ramsey’s side in the summer of 1966. His three goals in the group stage – one against Mexico and both in the 2-0 defeat of France – were crucial to their advance. He started the tournament alongside Jimmy Greaves, whose injury against France opened the door for Hurst, and the only debate on the morning of the final was whether the impending hat-trick hero would retain his place at Greaves’s expense.

Ramsey, like Shankly, recognised Hunt’s fundamental importance to his team. It was a mark of the striker’s intelligence – on top of his tireless work rate and ruthless quality in front of goal – that he adapted to different styles under two intensely demanding managers. At Liverpool he prospered from width, supplied by Ian Callaghan and Peter Thompson, but he was equally productive for Ramsey’s “wingless wonders”. He scored 18 goals in 34 appearances for his country over a seven-year international career. That era would produce lasting friendships. Hunt, a modest and reserved character, remained close to Martin Peters and Norman Hunter among others.

It was Shankly, naturally, who had the greatest impact on Hunt’s career. The forward remained indebted for a vital show of faith upon the legendary manager’s arrival at Anfield, along with the success and the relationship that followed.

Despite achieving so much in a defining period for club and country, Hunt came late to the professional game. He was 20 when he signed for Phil Taylor’s Liverpool, having completed national service in Aldershot before joining Stockton Heath in the Cheshire League. He signed as a potential replacement for Billy Liddell as the Liverpool great neared the end of his career, and scored on his debut against Scunthorpe in September 1959. But by his own admission playing regularly for the army and in the Cheshire League was no preparation for the rigours of the professional game.

The Liverpool dressing room was sceptical of the newcomer’s ability at first. Shankly, however, who had replaced Taylor within months of Hunt’s debut, spotted something in the finisher’s game. Hunt was one of the few players to survive the cull. In a team bolstered by the signings of Ron Yeats and Ian St John the striker repaid Shankly with 41 goals in 41 games as Liverpool ended eight seasons in the Second Division with promotion as champions in 1962.

Top-flight titles followed in 1964 and 1966, sandwiching the 1965 FA Cup success. Hunt scored the opening goal in the 2-1 final win against Leeds that brought Liverpool their long-awaited first triumph in the competition. On the opening day of that 1964-65 season he also scored the first goal to be shown on Match of the Day in a 3-2 win against Arsenal.

The World Cup polished a glorious era for Hunt. It is captured in a memorable picture of the Liverpool striker and an England teammate, Everton’s Ray Wilson, parading the Jules Rimet trophy around Goodison Park before the 1966 Charity Shield.

After 11 years at Anfield Hunt was sold to Bolton for £32,000, where he scored 25 goals in 84 appearances. The drop to the Second Division was softened by the fact Wanderers were the team he supported as a boy and managed by Nat Lofthouse, his boyhood idol. His Anfield testimonial in 1972, the year he retired, attracted a crowd of 56,000 with thousands more reportedly locked outside.

Hunt worked for the pools panel for more than 30 years after his career ended – management, he insisted, never appealed – and had a road haulage business. The honours system belatedly recognised his achievements with an MBE in 2000. Liverpool recognised the importance and status of “Sir Roger” long before. 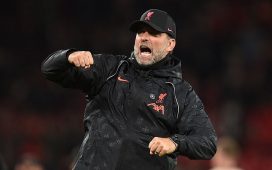 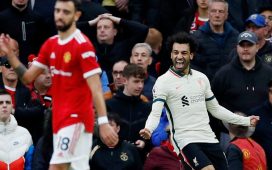 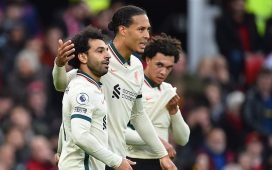 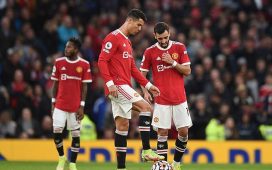 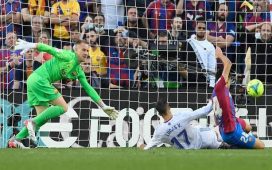