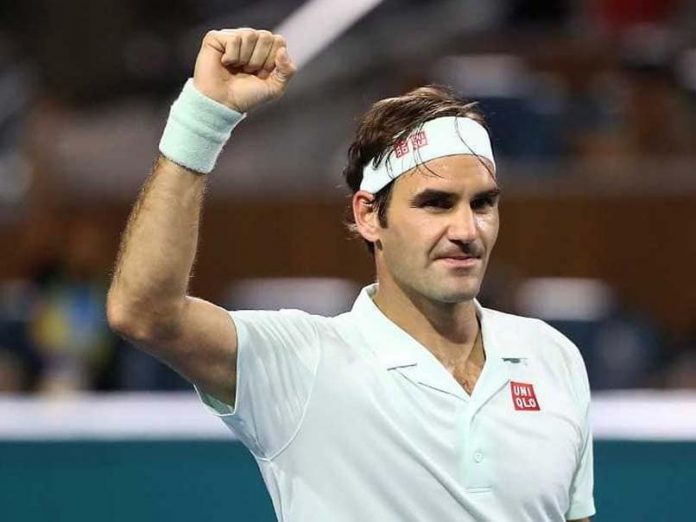 “It’s a match up I have been looking forward to my whole life, a high stakes match against your idol. It’s just a dream come true,” said Shapovalov.

“I will try and approach it like any other game, try and enjoy it, give it my all. It will be a difficult match but I am just happy to have a chance to play him.”

Federer may have been the 19-year-old’s hero but he’s attempted to learn from Rafael Nadal and Novak Djokovic too.

“With Roger, I was always looking at his backhand and tried to copy him and build my game like his – aggressive, always coming in,” said the number 20 seed.

With Shapovalov taking on Federer and long time friend and compatriot Felix Auger-Aliassime, 18, facing defending champion John Isner in the semis, the tennis stars of tomorrow are beginning to prove their worth on the biggest of stages.

“It’s crazy for me and Felix to both have reached the semi-finals,” Shapovalov said, while Federer called the clash of generations “exciting”.

“It’s an exciting draw, for John and for myself here, playing these young guys,” Federer said. “They are not just young, but they are very good, as well.

“I practiced with Denis way back, he might have been 16, 17. He was just hitting big. I was, like, ‘Wow, it’s unbelievable. How old is he? How good is he going to get? It’s going to be tough against him.”

The Swiss came into the match with Anderson knowing the world number seven’s huge serve could be the difference, just as it was in a dramatic five set, last eight encounter at Wimbledon won by the South African last summer.

Yet after a whirlwind first set, Federer had broken the Anderson serve three times and “bageled” his opponent, much to the delight of a packed house on center court who came to show their appreciation for the evergreen 37 year-old as he chases a fourth Miami title which would take his career tally to 101.

It was the first time Anderson, 32, has ever lost a first set at ATP level to love and although the second was far tighter, Federer was always in control.

Shapovalov, meanwhile, crashed home 40 winners in an entertaining tussle with American Tiafoe on a rain interrupted day in South Florida.

The weather certainly could have badly affected Ashleigh Barty’s attempt to reach her biggest WTA final with a four hour delay putting her charge on hold.

The Australian had played just four games with Estonia’s Anett Kontaveit before the rains came although once play resumed, the 22-year-old, who will break into the top 10 off the back of this excellent run to Saturday’s final, took advantage of her error prone opponent to win 6-3 6-3.

“It was a very long day. I know we had to wait around but it was an opportunity to drink some coffee and watch the golf so I was relaxed,” said Barty who took time out of the game in 2015 to play cricket before returning in 2016.

“When I came out I was ready for business.”

Simona Halep’s last four encounter with Karolina Pliskova was also affected by the inclement weather. The players rushed from court with the score locked at 3-3 in the first set.