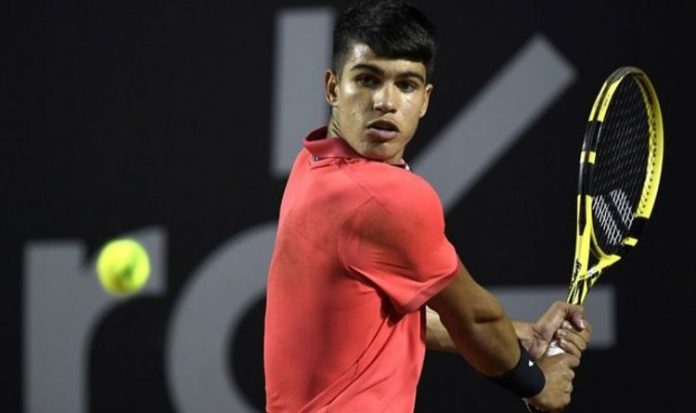 At just 16-years-old, Alcaraz is the latest member of the ATP’s NextGen cohort.

In February, the teenager made people sit up and take notice of his talent when he claimed a maiden ATP Tour-level match at the first attempt by beating experienced Spaniard Albert Ramos-Vinolas at the Rio Open.

Such is his talent, Alcaraz has hired Ferrero to be his coach and the 2003 French Open champion has been impressed with what he’s seen from the youngster.

And Ferrero feels Alcaraz’s attack-minded style can be compared to the likes of Federer and Djokovic.

“He likes to be very aggressive all the time. He likes to play close to the baseline,” Ferrero told the ATP.

“He’s not the typical player who only plays on clay courts. He likes to play on hard courts and he loves to play on grass.

“He played last year for the first time on grass and he loved it. He loves to finish points at the net.

“At the beginning, when I first met him, I almost was sure that his best level was on clay, but I think now he’s improving so much on hard court and I think he can even give a little bit more level on hard court, so that’s very good.

“He’s playing very aggressive from the baseline and he needs to improve a little bit his serve. But for 16, he’s serving well.

“If I have to say someone that I can compare him to, it’s the game of Novak Djokovic or maybe Roger Federer.

“They like to be aggressive from the baseline and they can go to the net to finish the point.”

Speaking after his win in February, Alcaraz himself compared his style to Federer’s.

”I like to play very aggressively, with a lot of winners,” Alcaraz said.

“My style is more or less like Roger Federer’s, aggressively coming to the net and playing a lot of drop shots.

“I always have positive thoughts. I always think I can win, no matter who the opponent is.

“If you don’t think you can win, you shouldn’t go on the court.”