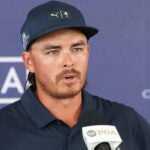 Rickie Fowler spoke to media at the PGA Championship on Monday.

TULSA, Okla. —  Rickie Fowler addressed the assembled media on Monday ahead of this week’s PGA Championship. Two of his answers jumped out.

The first came as Fowler was running through the same line of questioning he always faces these days, some variation of: What’s it like to be searching for your game? The storyline, oversimplified, is this: Fowler was really good, and now he’s not. He’s on your television screen during the commercials but less so when it’s time to show the Sunday contenders. It’s an intriguing spot to be. And so that question followed with the question-within-the-question: What’s it like to be asked about this sort of stuff all the time?

“Yeah, there’s probably not any questions that would be asked in here that I haven’t thought of or gone over on my own. Might surprise me every once in a while but no, I’m never afraid to hear from you guys or talk to you guys.”

In other words, Fowler is asking tougher questions of himself than he’s being asked by the media. It should come as no surprise that a golfer is his own toughest critic, but still — it was insightful. File it away for a moment.

Later in the presser, Fowler was asked whether he’d been approached by the LIV Tour. Many of his peers — and a significant percentage of star American pros — have pledged their loyalty to the PGA Tour. He very much did not do that. Instead, he confirmed he’d been approached.

“To be straightforward with you guys, I haven’t necessarily made a decision one way or the other,” he said. “I’ve mentioned in the past, do I currently think that the PGA Tour is the best place to play? I do. Do I think it can be better? Yes. So I think it’s an interesting position.

“Obviously there’s the LIV and Premier [Golf League], as well. These tours or leagues or whatever — however you want to classify or call them — they wouldn’t really be coming up if they didn’t see that there was more opportunity out there. I’ve always looked at competition being a good thing. It’s the driving force of our game. You know, being able to have games with guys at home, that’s how I always grew up is competing. I think competition ultimately makes people better, whether it’s business, sport.

“So it’s interesting, that’s for sure.”

Interesting is right. Remember answer No. 1? Where Fowler suggested he never gets asked a question that he hasn’t asked himself? The LIV stuff has been atop golf headlines for months, which means Fowler knew he’d get this question, and he very deliberately said he’s open to the idea.

There are different potential motivations. It’s very possible Fowler was just answering honestly; he’s intrigued by potential new opportunities in the golf space. Many of his peers are, too, though not all are so forthright about it.

It’s also noteworthy that Fowler name-dropped the Premier Golf League, which has fallen out of headlines as LIV has gained momentum but recently re-upped its pitch to players with an open letter. The PGL has been trying desperately to gain a foothold with players; a voice like Fowler’s could go a long way toward amplifying their proposal.

It’s possible Fowler is earnestly considering LIV as a destination, too, though it would be somewhat surprising given his position as one of the faces of the PGA Tour. But there’s a reason the series has found a receptive audience among some pros and, according to LIV CEO Greg Norman, there are about to be two billion more reasons, too.

To take Fowler at his word, though, he’s just trying to understand his options.

“I’m trying to learn as much as I can,” he said at the end. “I have no commitment one way or another.”

Last week, the PGA Tour denied releases for PGA Tour members to go participate in the first LIV event of the season, just outside of London June 9-11. Fowler didn’t confirm whether he’d applied for a waiver or not. But he did raise a question on everybody’s minds about Tour pros’ status.

“Are we independent contractors or not?” Fowler asked. “Like, with competition, if there were other leagues or tours or whatever may be, the Tour continuing to be the best place to play, guys will come and play and be at the Tour but there’s options to go play another event if you want to.

“I feel like there needs to be some clarity between if you’re an independent contractor or are you basically an employee.”

As for the future of pros curious to jump ship? Fowler said he thought PGA Tour members would be interested to know the punishment they’d face if they did go play.

“I think guys would probably like to know,” he said. “Because if you’re trying to make a decision one way or the other, I know there’s some guys that are probably in a position where the consequence may not matter. They may just be ready to go play and not look back type of thing and see how things come full circle.”

Fowler doesn’t sound like he’s in that camp. He’s happy on the PGA Tour — for now. But he sounds like he’d like to learn a little more, just to make sure.