Rhinos manage to keep lions away in remarkable test of strength


This astonishing footage shows a pride of predatory lions in a test-of-strength face-off with rhinos on a dirt track in the bush.

The extremely rare encounter was shot by Mark and Gail Fox just outside Kruger National Park in South Africa.

The video shows a group of lions lounging on the track, just feet from four rhinos.

As one swings away, a young lion sees its opening and charges, before the rhino turns back to confront it.

Threatened by the sheer size of the rhino and its intimidating horn, the lion backs off, before having one more failed attempt, then lazily sauntering away.

‘In six years that we’ve been in the Kruger park we’ve seen a rhino/lion encounter maybe twice.’

Mark, 54, added: ‘On that particular morning, I heard lions contact-calling, so I went down a road, and there they were on the road, then they walked into the bush.

‘There were three or four other cars watching, and those cars moved away. I said to Gail, “No, no, no, those lions are walking towards something”.’

According to Mark, this was more a test of strength and intimidation than an actual attempt to kill the rhinos.

He said: ‘If you watch the video, it’s the young lions that are close to the rhinos, then the big male comes stomping in.

‘It’s almost like he gave them a command, turned around, walked away and they left the rhinos alone.’

The already rare and beautiful sight may get even rarer.

Mark explained: ‘Rhinos are something that I particularly take note of. The rhino population itself has been decimated, we know that.

‘If you look at the statistics, in excess of 1,000 rhinos have been poached in southern Africa over the last three years in a row.’

Mark revealed Kruger was engaged in efforts to de-horn the creatures to combat this, but its efforts may not be enough, as the species remained critically endangered. 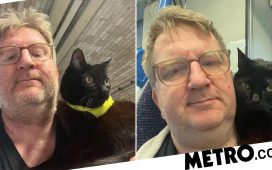 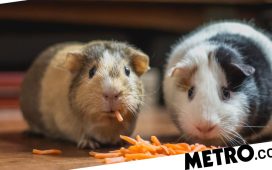