Gaetz had come under fire in the primary from veteran and former FedEx executive Mark Lombardo, who sought to spotlight the controversial congressman’s many scandals — including being embroiled in a federal sex-trafficking investigation.

“Send this Marine to Washington. I’ll respect your family,” Lombardo said in one of numerous ads attacking Gaetz, who has not been charged and who denies allegations of wrongdoing.

Gaetz, who has served in the 1st Congressional District since 2017, has long been one of former President Donald Trump‘s loudest supporters. But he received Trump’s endorsement just three days before the day of the primary election.

Lombardo, between salvos against “Lyin’ Matt Gaetz” for his remarks about women and his missed votes in Congress, has identified himself as a Trump-allied “America First” conservative.

In the run-up to the primary, Lombardo seized on Gaetz’s lack of an endorsement from Trump, questioning in an ad whether Gaetz was an “informant” who led the FBI to raid Trump’s Palm Beach resort home Mar-a-Lago.

Little polling was available ahead of the primary, but Gaetz, an incumbent who far outraised and outspent Lombardo, was considered the likely favorite. Lombardo had self-funded the vast majority of his campaign as of early August, campaign finance filings show.

Gaetz is expected to breeze to victory in November in the district, which has not been represented by a Democrat in nearly three decades. 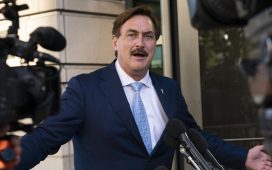