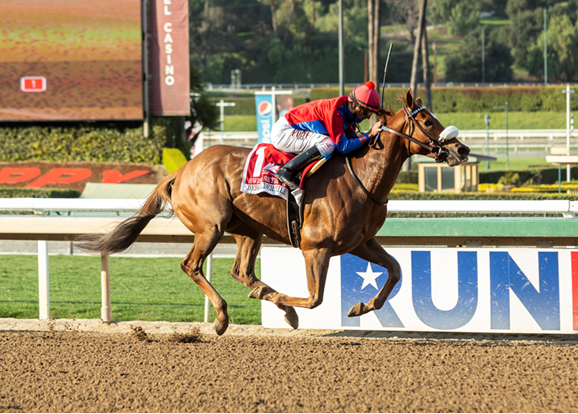 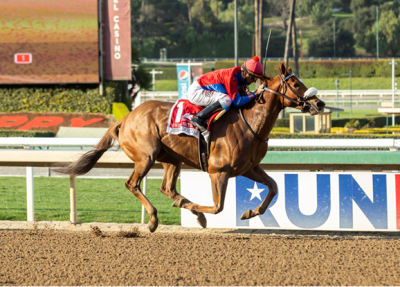 The Hall of Famer saddled Gary and Mary West’s homebred to an impressive 4 1/4-length victory over stablemate Hozier in the $1 million Rebel Stakes (G2) on Saturday at Oaklawn Park.

The win gave Concert Tour 50 points towards the Run of the Roses on May 1, putting him fourth on the Derby leaderboard.

Baffert, seeking a record seventh Derby victory, now has five of the top 15 3-year-olds on the Derby leaderboard: Unbeaten Life Is Good, winner of the San Felipe (G2) in his most recent start [second with 60 points]; Robert B. Lewis (G3) winner Medina Spirit [eighth with 32 points]; Hozier moves into 12th with 20 points after his runner-up finish; and Spielberg is 15th with 17 points.

Concert Tour had won his first two starts, including the 7-furlong San Vicente (G2), but earned his first Derby points on Saturday. He returned $5.40 for a $2 win bet as the second choice in the field of eight.

Hozier picked up his first qualifying points as he closed late to finish three-quarters of a length in front of the Steve Asmussen-trained Big Lake [10 points].

“That was nice, impressive,” Baffert said of Concert Tour. “I’m just happy to run 1-2. That’s pretty huge. I’m just glad they showed up. I just told Rosario he’s fast. I know Caddo River’s fast. This horse going two turns first out, just play the break and do what you think is right. He’s a very, very fast horse. He looked like he was doing it pretty easily, though. They slowed up a little bit down the backside. Joel, you could really tell he was controlling the race. This is a really top horse. I was going to be disappointed if he didn’t do what he did today.”

Baffert has now won a record eight Rebels, including the 2020 edition with Nadal.

Concert Tour made his first two starts at Santa Anita, breaking his maiden on Jan. 15 going 6 furlongs and eking out a half-length victory over stablemate Freedom Fighter in the San Vicente on Feb. 6.

“It was a very good race,” said Rosario of the colt’s performance in the Rebel. “He broke very good, and I just let him go on with it. It was impressive for his first time going two turns.”

Super Stock, also trained by Asmussen, was fourth and picked up five points, with Caddo River, Keepmeinmind, Get Her Number and Twilight Blue completing the order of finish.

Trained by Kenny McPeek, the champion 3-year-old filly who was a disappointing seventh in the Breeders’ Cup Distaff (G1) in her previous on Nov. 7, cruised to the wire under Robby Albarado with her ears pricked.

Breaking from the rail, the well-traveled filly was angled three-wide on the turn for home and surged to the lead with a furlong to go.

“Yes, she met expectations, but you never know,” said McPeek. “The distance for me was a little bit of a worry because of the run to the first turn. But Robby does know her so well, to get her in 12s, just get her into a nice rhythm and let her make her run. You can’t force anything with her, and if you go too fast early, she will wilt a little bit.”

Next up for Swiss Skydiver, now 13-7-3-1 with earnings of more than $2 million? McPeek mentioned the Apple Blossom (G1) at Oaklawn on April 17 or the La Troienne (G1) at Churchill Downs on April 30.

Shedaresthedevil, winner of the 2020 Kentucky Oaks (G1), returned to her winning ways with a head victory over 3-2 favorite Letruska in the $350,000 Azeri Stakes (G2) at Oaklawn Park.

In her first race since October, when she ran third in the Spinster Stakes (G2), the 4-year-old filly trained by Brad Cox took the lead from the start and held off a late bid by Letruska.

“We caught a flyer out of the gate,” said winning rider Florent Geroux. “I was expecting Letruska to lead all the way. I don’t know if she didn’t break fast enough or stumbled, but we inherited the lead and I just took it from there. My filly is extremely talented. You know you want to slow her down, just keep her in a nice rhythm. Turning for home, she gave me everything she had.”

Racing for the partnership of Flurry Racing Stables LLC., Qatar Racing Limited, and Big Aut Farms, Shedaresthedevil has now won six of 12 career starts and improved her bankroll to just over $1.5 million. She returned $5.60 as the 6-5 second choice in the five-horse field.

Champion male sprinter Whitmore was overtaken by C Z Rocket ($7.20) in the stretch and denied a fifth consecutive victory in the $200,000 Hot Springs Stakes at Oaklawn Park.

Whitmore defeated C Z Rocket by 3 ¼ lengths in the Breeders’ Cup Sprint (G1) on Nov. 7 but lost out by a neck in the return match in the 6-furlong sprint.

Family First: Victor Espinoza Back At Santa Anita And Raring To Go