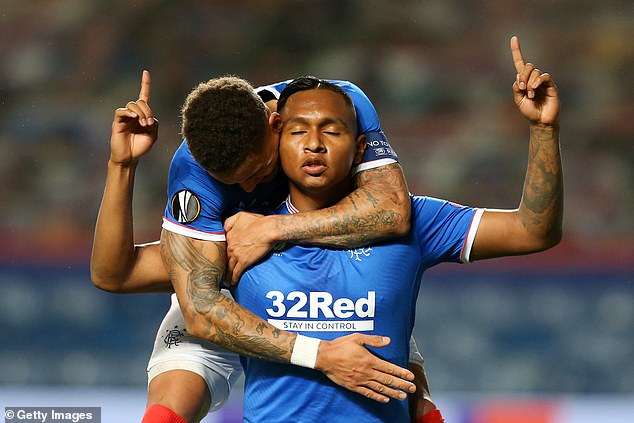 It seemed the spotlight might shift elsewhere. That he was no longer the man upon whom Rangers relied in the heat of continental competition. Alfredo Morelos wasn’t having that.

Stepping off the bench midway through the second half, Morelos took just seven minutes to score a goal that carried huge significance personal significance as well as retaining three vital Europa League points at Ibrox.

A thumping header from a brilliant Borna Barisic cross was his 21st European goal for the club, drawing the Colombian level with Ally McCoist’s all-time record. In three-and-a-bit seasons, that counts as a phenomenal return.

His starting role had gone to Kemar Roofe, fresh from that extraordinary strike in Liege last week. But as Steven Gerrard’s side toiled for incision against a Polish side full of energy and technical bravery, the Ibrox boss turned to Morelos for a solution.

It was a call he answered in emphatic fashion, rekindling his love affair with this particular tournament. Just as he did so often last term, the 24-year-old made a decisive intervention when it was needed most.

Rangers did not find their fluent best here when making it 17 games unbeaten and five straight wins in Europe. Poznan caused more anxiety than some might have expected. It was a tense grind in closing stages.

The outcome, though, leaves Gerrard’s men sitting very pretty in Group D. Next week’s trip to Lisbon to meet Benfica will be a battle between two teams with six points from two games. A path towards the knockout stage is opening up nicely. 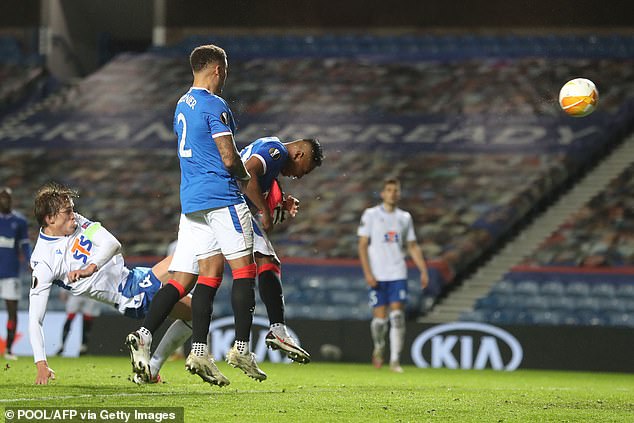 Fortitude had to be found to get this win banked and it will be the same for Rangers on Sunday when they have an opportunity to move nine points clear at the top of the Premiership.

A trip to meet Kilmarnock at Rugby Park – a graveyard of past ambitions – likely stirred more trepidation in supporters when they viewed this week’s fixture list. That in itself is a compliment to just how far Rangers have advanced in Europe under Gerrard.

This was Roofe’s first start since the beginning of this continental expedition against Lincoln Red Imps in Gibraltar on September 17 – the evening he sustained a calf injury that cost him more than a month of involvement. It could also have been viewed as a sign of changing times at Ibrox. 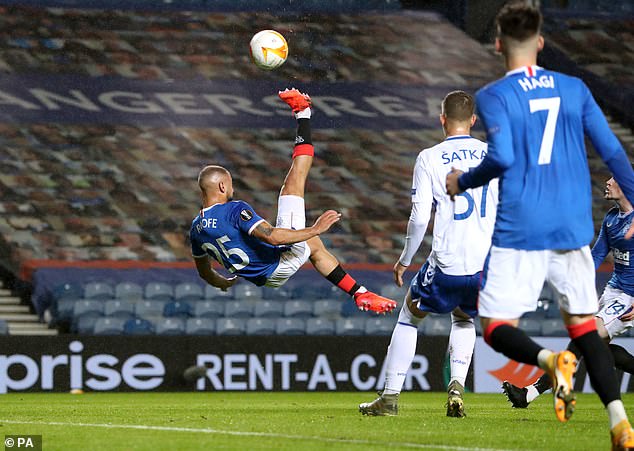 The idea of a fit and available Morelos not starting a Europa League group stage match would have been unthinkable last season. As Gerrard outlined on Wednesday, however, his striking options are now at the strongest level of his 28-month tenure

Morelos’ absence didn’t entirely blunt Rangers but nor did they have it all their own way in a first half that carried an appealing tactical dimension.

Poznan came here to play out from the back. Their willingness to do so in the face of the home side’s high press showed a belief undimmed by flawed recent form. Second in the Ekstraklasa last season, they sit tenth this time around having won just two of their opening seven games.

A Daniel Ramirez left-foot shot wide from 20 yards was the Poles attacking introduction. Then a fine forward surge by Tymoteusz Puchacz ended with a low cross that required an agile clearance from Balogun to find safety.

After losing at home to Benfica last week – an end-to-end contest Gerrard described as resembling a basketball match – coach Dariusz Zuraw had clearly decided continuing a front-foot approach was essential to maintain a serious interest in the section. The hope for Gerrard was that space would be left for his team to exploit. 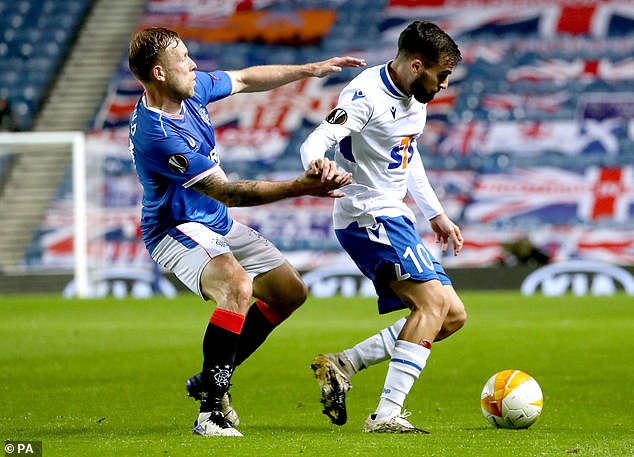 Leon Balogun, Barisic, Scott Arfield, Glen Kamara and Roofe came into the side on Thursday

There were times when Rangers did stretch a defence that had former Celtic centre-back Thomas Rogne – the Lech captain – at its heart. Just not frequently enough to satisfy the Ibrox manager ahead of his half-time address.

Roofe completely foxed Lubomir Satka to turn and advance towards the area, touching the ball right to Hagi in space. The Romanian couldn’t quite sort out his feet in time, though, and sliced his snapshot wide.

Hagi then combined with Arfield for a strike by the latter held by Filip Bednarek before a more enticing chance arrived on 25 minutes.

Barisic delivered with typical quality from the left but Roofe miscued his first attempt. He went again with an ambitious overhead kick that bounced wide – much to the dismay of Ryan Kent who was closing in to strike had the ball been left.

Steven Davis then had a couple of goes at the Lech goal, but Poznan were carrying no less of a threat. Just before the break, Alan Czerwinski set up Mikael Ishak for a drive over the top from a promising position. 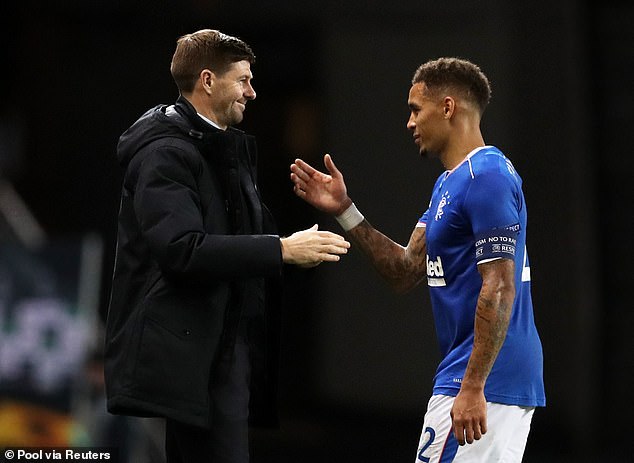 Gerrard needed more invention after the restart but it was their opponents who initially exuded danger on the break.

A fine cross from raiding right-back Czerwinski just eluded takers on the edge of the six yard box. Then a smart delivery from Ramirez was headed wide by Rogne.

Rangers were huffing and puffing but blowing nothing down. Gerrard decided a change was needed on 62 minutes. Morelos for Roofe was the call. And it proved inspired. Within seven minutes, the breakthrough arrived.

Kent found Barisic in an advanced position on the left and the Croatian whipped in a cross of such inviting quality that it should have come with an RSVP card. Morelos moved to meet it, losing Rogne who slipped and sprawled on the deck.

By the time the Norwegian looked up, the ball had struck the back of the net and bounced back. Morelos connected with such force on the header that Bednarek had not a hope.

Rangers had to dig deep to see it through as Poznan pounded forward. Filip Marchwinski headed wide their best chance, though, and another positive European result was secured. 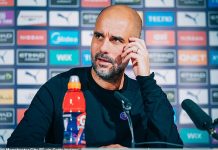 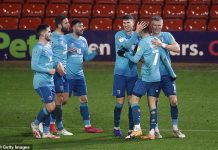 Barnsley 0-4 Bournemouth: Cherries thrash Tykes at Oakwell to go top of the Championship 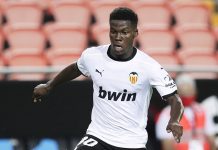 Jean-Michel Aulas: 'I realised I could do something about the inequalities in football' 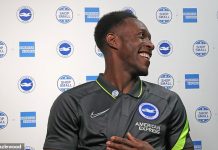 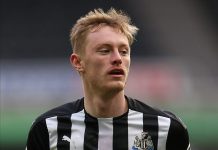 Danny Welbeck: 'It’s not great to dwell on the past. You’ve got to look forward' 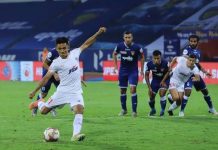 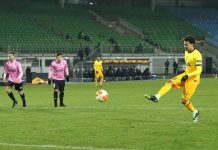 Spurs through despite draw