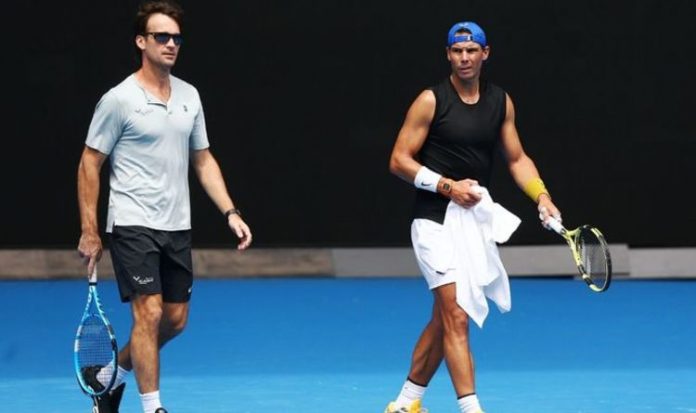 Rafael Nadal’s coach Carlos Moya has given his evaluation of the Spaniard’s 2020 season so far with the tennis season is currently on a prolonged break.

There is no tennis scheduled until June 8 due to the global coronavirus outbreak which has claimed the lives of nearly 38,000 people around the world.

With Wimbledon officials set to announce the cancellation of the grass-court Grand Slam on Wednesday, the hiatus could be extended even further.

Nadal is at his home in Mallorca waiting for the action to resume after a promising start to his year.

The 33-year-old reached the final of the ATP Cup with Spain but lost to Novak Djokovic after a gruelling schedule of matches.

He then lost out to Dominic Thiem in the Australian Open quarter-finals before bouncing back impressively at the Mexican Open in Acapulco to win his 85th career title and Moya believes Nadal can be reasonably content with the start he’s had.

“The start has not been bad,” Moya told the ATP. “Rafa came into the ATP Cup a little tired but he was still in the final.

“He did notice some mental fatigue in Melbourne at the Australian Open.

“He went from less to more during the tournament and could have beaten Dominic Thiem in the quarterfinals, although he was more successful and inspired and was even close to winning the title.

“From one day to the next, everything collapsed until reaching what it is now.

“I think it is normal, although few people expected it. The right thing is being done.

“No one could have thought of the current situation in January. We had the fires in Australia and now this has overcome everything.

“I remember that on the way back from Melbourne, at the Dubai airport, all the workers were already wearing masks. “Now the most important thing is that this is solved as soon as possible and that everything returns to normal.”