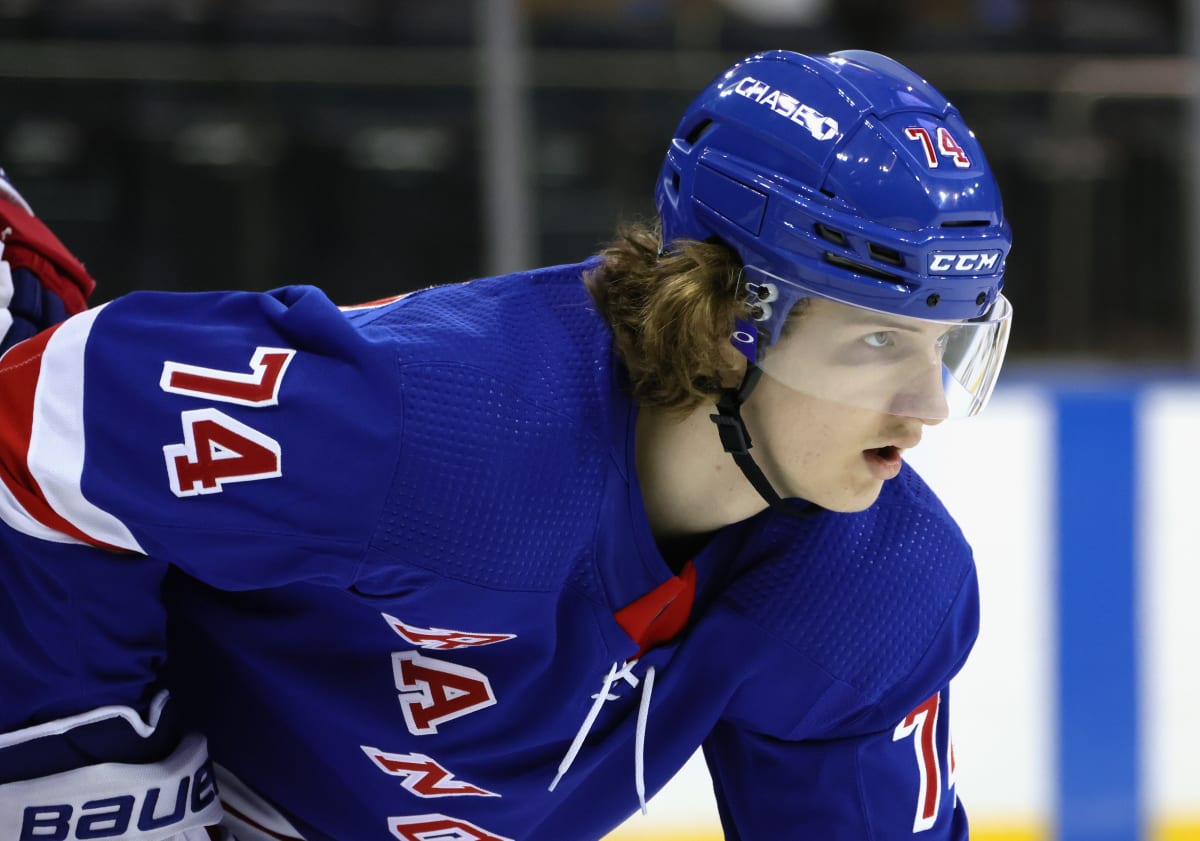 The New York Rangers are one of the league’s hottest young teams and they have a prospect pool that still has quite a bit of talent on the way.

Of the nine youngest teams in the NHL, based on projected lineups on CapFriendly, the Rangers are the only ones that made the playoffs last year. Headlined by 26-year-old all-world goaltender Igor Shesterkin, forwards Alexis Lafrenière and Kaapo Kakko, 24-year-old Norris Trophy winner Adam Fox and new captain Jacob Trouba, the Rangers are set up for a sustained run of contention.

While their best young players are already on the NHL roster such as Braden Schnieder and K’Andre Miller on the blueline and Filip Chytil up front, the pipeline has some very talented players. Puck-moving defenseman Nils Lundqvist played the 25 games necessary to burn his rookie status last season, but the young Swede spent most of the season at the AHL level. Lundqvist is an incredibly smooth skater who understands how to direct traffic in the transition game. His ability to thread passes through traffic to attackers in motion up ice is impressive. The 5-foot-10 blueliner’s defensive game is built on his ability to use his mobility to cut off routes and break up play with his stick.

Zac Jones has played games at the NHL level and could see action with a sustained role in the lineup this upcoming season. Another undersized defender who uses his mobility and puck skill to evade pressure and move the puck up ice, Jones is adept at deking opponents to move up ice, but like Lundqvist, the defensive side of the puck is where he needs work. Matthew Robertson is much bigger, standing at 6-foot-4, and his game is more well-rounded. Robertson is efficient in his own end, using his frame to close out on oncoming attackers as well as his stick to poke the puck free and into space. His passing ability on the breakout is accurate and he rarely hesitates to make the play that presents itself. Quick decisions, precise execution, and a solid all-around game will help him find success at the AHL level in his second season pro.

The most interesting name from the forward group, for better or worse, is Vitali Kravtsov. Once a highly rated prospect, Kravtsov had a complex last couple of years. He has had disputes with the front office and has refused to play in the AHL with Hartford. It seems the tenuous relationship is being put behind them and the Rangers and Kravtsov will be looking to make the best of the situation. Kravtsov will likely be on the third line, playing a pivotal role with Filip Chytil and Sammy Blais as one of the more offensively inclined third lines in hockey. Hopefully, the relationship can stay mended and Kravtsov can finally showcase the game we’ve all been waiting to see.

Brennan Othmann has been a beast since being drafted last year, popping off for 50 goals with the Flint Firebirds in the OHL. His blend of physicality, skill, and an unrelenting motor could make him one of the more unique players in the league. He will get in your face before the whistle, score a goal, and then make sure you hear about it from him first. A skilled pest that could become a fan favorite in a market like New York. Will Cuylle is a physical presence that loves to throw his body around and possesses a booming shot. Ryder Korczak is a slippery offensive player who blends high-end puck skill and slick playmaking. The forward depth that the Rangers boast is impressive and they added to it with Adam Sýkora and Bryce McConnel-Barker back in July.

With their first-rounder going to Winnipeg in the Andrew Copp trade during the season, the Rangers didn’t pick until day two. With the 63rd overall pick, they selected Slovak winger Sýkora, a highly skilled forward who plays with full commitment to every play. He’s relentless in his pursuit to make plays happen at both ends of the ice. Sýkora attacks opposing puck carriers in his end of the ice, pressuring them into making mistakes regularly and is one of the most consistent players in the draft on the backcheck. His offensive game is creative and built on his speed. Sýkora uses his speed to beat defenders wide and will mix in several moves to work outside-in or inside-out depending on what the defense gives him.

McConnell-Barker is an excellent complimentary center, allowing his teammates to be the stars. His mobility will need to improve at the next level but that’s not what his game is predicated on. BMB understands where to be and when to be there defensively, reading the opposition and cutting off passes or skating routes with excellent timing. He isn’t going to blow you away with end-to-end rushes, rather he will be the first man to get the puck out of his end and find a streaking forward who can create offensively and the McConnell-Barker will get into an excellent shooting position to support his linemates. He is more substance than flash, a trait that often enables players to have long NHL careers.

Noah Laba’s game isn’t refined yet, but there is a nice set of tools to work with as long as the Rangers commit to Laba’s development. Going to the NCAA will be an excellent route for him to work on refining the finer areas of his game.

Victor Mancini is a 2002-born defender who has played all over the world, finally getting drafted after his freshman season in the NCAA with the University of Nebraska-Omaha. He defends well and can make a solid first pass but his offensive game is simple. There aren’t any standout trait that makes you fall in love with him but he plays a solid all-around game. He’s been around the prospect world for a while, playing in Sweden, the USHL, and now the NCAA so teams are familiar with how his game translates across several leagues.

The wing depth that the Rangers have built up is impressive. They have a diverse set of talents, some big swings, and a few players with more straight-line paths to the pros. Kravtsov is a big, strong winger who blends physicality and skill and should be impacting the NHL roster to start the season. Othmann is a player who could be a Brad Marchand-lite in a lot of ways. He can get under the opponent’s skin and then score a goal and taunt them for letting him do it. Cuylle is a bowling ball on ice, looking to crash and bang at every chance he gets.

Sýkora is a highly skilled player who could be a top-six forward with impressive hands and playmaking ability. Korczak is listed as a center but could move to the wing, using his deceptive hands and silky passing ability to pick apart defensive units. They are a bit riskier, but the payoff could be big. The same could be said about undersized forward Brett Berard, a dog on a bone at times, working on getting into an excellent offensive position.

The center depth of the Rangers system isn’t quite as strong as the rest of their pipeline. They have a few names of intrigue such as waterbug NCAA free agent signing Bobby Trivigno and skilled complimentary centerman Karl Henriksson but no one projects much higher than a third-line center at best. They’ve primarily drafted high and used those picks on wingers, so they should look to grab a few centers with high upside in the near future.

Next Man Up: RW Vitali Kravtsov

The rift between team and player seems to be a thing of the past. Kravtsov will be given every chance to not only make the Rangers roster but make a legitimate impact on a contending team. The young Russian has impressive puck skill for a big man and he will use his body to protect pucks as he drives the lane. His offensive game blends power and finesse, working off the walk and then dangling a defender in open space. He has a wicked shot when given the chance to load up which should make him a scoring threat anytime he can work into space. The moment is now for Kravtsov to seize his NHL opportunity and prove the doubters wrong by showcasing the talent that made him the 9th overall pick in 2018.

For a deeper dive into the prospect pool with player rankings, check out the Yearbook and Future Watch editions of the Hockey News print edition! 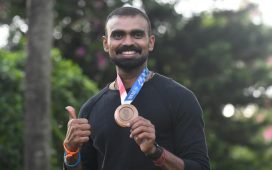 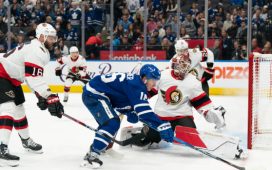 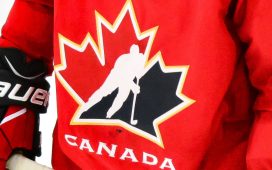 What You Need To Know After Hockey Canada's Hearing From Oct. 4 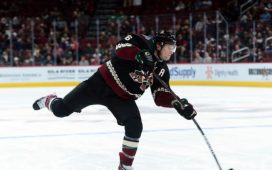 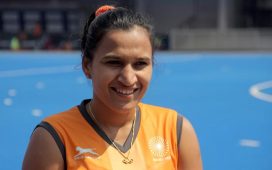 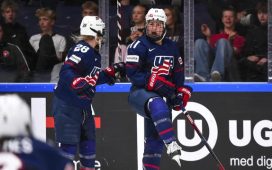 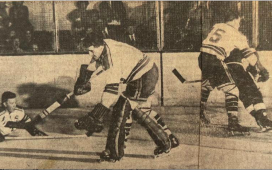 From the Archives: The Battle-Scarred Life of Chuck Rayner 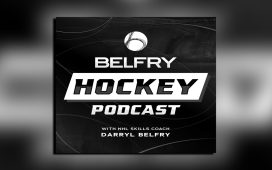