A man has been charged with trespassing at Buckingham Palace with a knife.

Police arrested a 46-year-old man shortly after 11.30am on Thursday, as he attempted enter through a gate into a service yard at the rear of the palace.

Chorrie Thompson, 46, of Ashcombe Park, Neasden, north west London, was charged on Friday with trespass on a protected site and possession of a blade or sharp pointed article in a public place.

He will appear in custody at Westminster Magistrates’ Court on Saturday, Metropolitan Police said.

The King’s Troop Royal Horse Artillery processed along the Long Walk up to Windsor Castle at midday, as they prepared to mark the carrying of Prince Philip’s coffin.

Hundreds of people watched on as dozens of riders, wearing black, gold and red uniforms and carrying three guns, rode up to Cambridge Gate, where tributes to the Duke of Edinburgh have been laid throughout the week.

Members of the regiment will fire minute guns from the east lawn of Windsor Castle as the coffin is taken from the castle to the chapel.

Who will be attending the funeral?

The service has been reduced from 800 to just 30 people due to coronavirus restrictions, so has been limited to family.

The procession will be led by the Queen and the Duke of Edinburgh’s children. Charles, the Prince of Wales, and Anne, the Princess Royal, will lead Prince Andrew, the Duke of York, Edward, Earl of Wessex and other family members walking behind the duke’s coffin.

The Queen will join the funeral procession, travelling by car.

Princes William and Harry, who have reportedly had a difficult relationship in recent years over Harry’s decision to pull away from the royal family, will not walk shoulder to shoulder but with their cousin Peter Phillips between them.

Other attendees include Camilla, Duchess of Cornwall, Kate, Duchess of Cambridge, Sophie, Countess of Wessex and her children Viscount Severn and Lady Louise.

Also attending will be the children of the Queen’s sister Princess Margaret, three of Philip’s German relatives and his close friend Countess Mountbatten of Burma.

The first minister of Wales has sent a flower wreath to the Duke of Edinburgh’s funeral to offer “sincere condolences” on behalf of the country.

The wreath, made out of white chrysanthemums and red roses, is accompanied by a short message written in English and Welsh by Mark Drakeford.

The message says: “On behalf of the government and people of Wales. Cydymdeimlad diffuant – Sincere condolences.”

Philip’s coffin moved ahead of ceremony

Throughout the week, the Duke of Edinburgh’s coffin has been resting in Windsor Castle’s private chapel.

At 11am, it was moved by a bearer party from the Queen’s Company, 1st Battalion Grenadier Guards to the royal residence’s inner hall.

Prince Philip was closely associated with the regiment, serving as colonel of the Grenadier Guards for 42 years.

His coffin was covered with a wreath, his sword, naval cap and his personal standard.

What to expect at the funeral

The Duke of Edinburgh was involved in organising all details of the ceremony. His coffin will even be carried by a Land Rover which he helped to design.

There won’t be any eulogies or speeches from the family, but this is usual for royal funerals. Cameras will be allowed into the funeral so the public can share in the ceremony.

You can read the timeline of events at the service here:

The Duke of Edinburgh’s funeral is set to reference his “unwaveringly loyalty” to the Queen over their 73-year marriage.

The service will also pay tribute to his “courage, fortitude and faith”.

On the eve of the funeral yesterday, a personal photograph of the Queen and Prince Philip was released, relaxing together during a holiday in the Scottish Highlands on the Balmoral estate.

On Friday, the archbishop of Canterbury said that while the Queen would behave “with extraordinary dignity and extraordinary courage”, saying goodbye to Philip would be an “anguished moment” for her.

The archbishop of Canterbury and the dean of Windsor will reference the impact he had on the UK as the Queen’s consort, but there will be no eulogies or family readings – these are uncommon at royal funerals.

In the Bidding, the dean of Windsor, will say: “We have been inspired by his unwavering loyalty to our Queen, by his service to the nation and the Commonwealth, by his courage, fortitude and faith.

“Our lives have been enriched through the challenges that he has set us, the encouragement that he has given us, his kindness, humour and humanity.”

You can read more on the service’s nods to the Queen and Prince Philip’s decades-long marriage here:

Hello and welcome to our live blog on the funeral of Prince Philip, Duke of Edinburgh, which will be taking place in Windsor today.

Due to coronavirus restrictions, there will be just 30 attendees at St George’s Chapel, situated on the grounds of Windsor Castle.

I’ll be bringing you updates on the build up to the ceremony, which begins at 3pm, and news as it progresses.

If you are marking the funeral in some way, are in Windsor, or simply spot something we should be reporting on in this blog, feel free to send me a message on Twitter.

US workers continue unionization fight – but will Amazon prevail?

Will inflation thwart the US economic recovery? 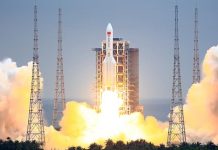 The recall circus is back: Schwarzenegger’s 2003 win and the fight to oust Gavin Newsom 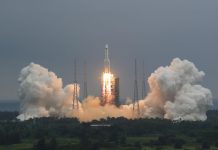 China says most rocket debris burned up during reentry