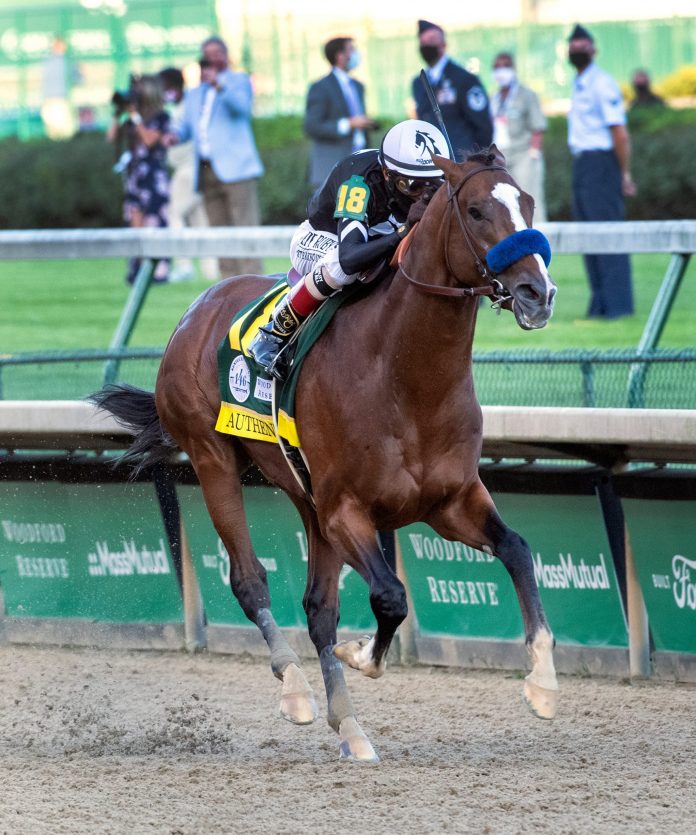 Bob Baffert’s merry pranksters, Authentic and Thousand Words, posted workouts at Churchill Downs on Saturday, and the trainer pronounced both 3-year-olds colts are in fine form two weeks before the $1 million Preakness (G1).

Kentucky Derby (G1) winner Authentic put in the fastest of 38 works at 5 furlongs in 59.20 seconds, while Thousand Words went the same distance in a more leisurely 1:02.40.

“Authentic is a big, strong horse and is handling things very well after the Derby,” Baffert told the Churchill Downs press office. “I think both horses worked really well this morning. They’ll work once more on Saturday before shipping to Pimlico.” 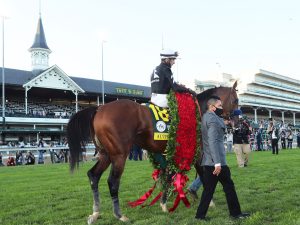 Authentic, a winner in 5-of-6 races and expected to be the favorite for the 1 3/16-mile final leg of the 2020 Triple Crown on Oct. 3, knocked down Baffert in the Derby winner’s circle in a display of aversion to his blanket of roses.

Thousand Words, winner of the Shared Belief in his previous start, was scratched from the Derby moments before the race after he reared up in the paddock while being saddled and fell on his side. He was not injured, but protocol called for an automatic scratch.

While Baffert’s colts give the Hall of Famer a shot at a record eighth Preakness victory (he’s tied with R. Wyndham Walden with seven), the rest of the field could be very tough.

Start with Art Collector. The colt was also on the Churchill work tab Saturday, breezing 5 furlongs in 59.40 under jockey Brian Hernandez, Jr.

The Blue Grass (G2) and Ellis Park Derby winner also was scratched from the Derby with a minor foot injury a few hours before the post-position draw. He was the expected second choice in the Derby.

“He’s in a great spot right now with his fitness,” trainer Tommy Drury said. “We wanted a bit more of a serious work today and he went well within himself. He’ll have a maintenance work next weekend before we ship to Baltimore.”

After finishing second to Authentic in the Derby, Belmont Stakes (G1) winner Tiz the Law was returned to New York, where a decision on the Preakness could come in the next few days after a workout, according to Jack Knowlton, managing partner for owners Sackatoga Stable.

When the Tiz the Law verdict is revealed, it’s likely to determine the Preakness status of the filly Swiss Skydiver, who won the Alabama (G1) but finished second to Shedaresthedevil in the Kentucky Oaks (G1) on Sept. 4. Trainer Ken McPeek is looking at his options.

“It’s going to depend on who shows up,” McPeek said earlier this week. “We are also nominating her to the Spinster (at Keeneland, Oct. 4) and she’s been invited to the QEII (at Keeneland, Oct. 10). We’re shopping it, that’s all. We have three good choices. My strong preference would have been a 3-year-old filly Grade 1 [on dirt], but there isn’t one out there.”

The Spinster (G1) is for fillies and mares 3 and older; the Queen Elizabeth II (G1) is for 3-year-old fillies on the turf. Swiss Skydiver worked 4 furlongs in 48.00 at Churchill on Saturday.

The list of contenders has drawn a few new names the past few days, among them being Jim Dandy (G2) winner Mystic Guide, Mongolian Wind (winner of three straight, most recently the Gold Cup Stakes in Canada), and Jim Dandy runner-up Liveyourbeastlife.

Of course, the Preakness tops the weekend at Pimlico as the final leg of the refashioned Triple Crown due to the coronavirus pandemic. It also serves for the first time as a Breeders’ Cup “Win and You’re In’’ qualifier for the BC Classic on Nov. 7.

Woodbine: Dreaming Of Drew A Dream Come True For Minshall And Co. 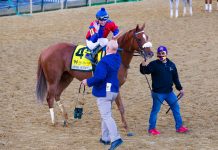 Breeders’ Cup Pre-Entries: Baffert has 3 for the Classic; Distaff likely for Swiss Skydiver