“We just gave him an easy half-mile nine days off of the Derby,” Asmussen said shortly after the workout. “Obviously, we’re very happy how Epicenter came out of the Derby. He’s consistently been a sound horse and heads up to Baltimore early (Tuesday) morning.”

The Hall of Fame trainer said Epicenter and his other Pimlico-bound horses will leave between 3-4 a.m. in order to avoid morning rush hour leaving Kentucky and afternoon rush hour arriving in Baltimore.

Louisiana Derby (G2) winner Epicenter appeared headed to a Kentucky Derby victory with an eighth of a mile to go. But 80-1 shot Rich Strike came flying up the rail to get past him in the final strides for a three-quarters of a length victory.

“We were second. Turn the page. Move on. What do we do now?” Asmussen said of the Derby result. “We’ve got a quality 3-year-old that has some wonderful opportunities left in the second half of the year, and we plan on having him ready for them. There are some extremely lucrative, important races out there, and he needs to be ready. He is very accomplished but yet to be a Grade 1 winner. For him to add a Grade 1 in a classic to his resume would be very important to us.”

Asmussen won the 2007 Preakness Stakes with eventual two-time Horse of the Year Curlin, who finished third in the Kentucky Derby. He won the Middle Jewel of the Triple Crown two years later with the filly Rachel Alexandra, who was sold to wine magnate Jess Jackson and turned over to Asmussen days after she won the Kentucky Oaks (G1) by 20 1/4 lengths.

The Kenny McPeek-trained Creative Minister, an impressive allowance winner on the Derby undercard, galloped at Churchill Downs and also will leave for Baltimore early Tuesday morning. Owners Fern Circle Stables and Back Racing LLC are putting up $150,000 to supplement the Creative Cause colt into the Preakness.

Hall of Fame trainer D. Wayne Lukas, who rode shotgun in the cab of the van, will saddle the daughter of Arrogate Saturday in search of his seventh success in the Preakness Stakes (G1)

Filly and trainer are scheduled to arrive at Pimlico in late afternoon Monday.

Villa Rosa Farm and Harlo Stable’s Fenwick, trained by Kevin McKathan, was entered Monday morning in Saturday’s 147th Preakness Stakes. The son of Curlin was also being considered for a run in the $100,000 Sir Barton on the Preakness undercard at Pimlico Race Course.

Fenwick most recently finished 11th in the Blue Grass (G1) at Keeneland, after graduating with a front-running 5 ½-length victory at Tampa Bay Downs.

“We think he should have run well in the Blue Grass. He broke a step slow. He got cut off on the corner. The jock sat down on him for about 10 seconds. He’s the kind of horse who needs to be free to run. He didn’t get that chance,” said Villa Rosa Farm’s Jeremia Rudan, an Ontario, Canada businessman. “I’m not saying he would have won, but if he had made that hole on the first turn, it might have been a different race.

“He’s happy; he’s sound. The way the Preakness is lining up, there’s no reason not to give it a shot,” he added.

Early Voting had a routine gallop Monday morning, Brown said, four days after he turned in his final timed workout for the Preakness: a ‘bullet’ five furlongs in 1:00.63 on the main track at Belmont.

“He breezed good and came out of it good,” said Brown, who has been pleased with the way the lightly raced colt has progressed.

Regular rider Jose Ortiz has the mount for the Preakness. Ortiz was aboard in each of Early Voting’s three previous races: a debut victory in a one-mile maiden race in December; a front-running win in the 1 1/8 miles Withers (G3) on February 5; a second-place finish by a neck in the Wood Memorial (G2) on April 9.

Yakteen: ‘Light Came On’ for Armagnac

Eight days ago, the “light came on” for Southern California-based Armagnac.

And that earned him a plane ride to Baltimore where he will run in the 147th running of the Preakness (G1) at Pimlico Race Course.

On May 8, Armagnac, a son of Quality Road, led from gate-to-wire in winning a first-level allowance at 1 1/16 miles at Santa Anita. That came after he was no factor in the Santa Anita Derby (G1). He was fourth in that race behind the well-regarded Taiba and Messier.

Happy Jack, another Preakness runner, was third in the Santa Anita Derby, a neck in front of Armagnac, who was 72-1, making him the longest shot on the board in the field of six.

Yakteen got a much better result in the allowance, albeit against lesser competition.

“The light came on a little bit in his last race,” Yakteen said. “He ran well enough to where the connections thought we would take a shot and run back in the Preakness.”

Armagnac has won two of five career starts. In his only other graded-stakes try, he was sixth in the San Felipe (G2) at Santa Anita on March 5.

“He’s just a beautifully made horse, a healthy, forward-moving horse,” Yakteen said. “I think if we continue with that nice pattern, we will see a big race from him.”

Yakteen, who will be saddled his first Preakness starter Saturday, said Armagnac galloped 1 ½ miles at Santa Anita Monday. The trainer said he will be on the Pimlico grounds Wednesday morning.

Irad Ortiz Jr. will ride Armagnac in the Preakness. It will be the first time he has ridden the colt.

Happy Jack a Horse for the People

Happy Jack is a son of 2013 Preakness winner Oxbow. O’Neill said one of the traits of horses with Oxbow’s lineage is their friendliness.

Calumet Farm’s Happy Jack continues to train at Churchill Downs, where he remained after finishing 14th in the Kentucky Derby. Sabas Rivera, a barn foreman for O’Neill, has been overseeing the Preakness preparations in Kentucky. The colt has been galloping daily.

“He is very easy to train,” O’Neill said. “Very straightforward. He gets his gallop done and he doesn’t fight. He goes back in his stall, eats and sleeps.”

Happy Jack galloped 1 ¼ miles Monday morning and is scheduled to leave Kentucky Tuesday morning and arrive in Baltimore later in the afternoon. O’Neill said he will fly to Charm City Wednesday night and be on the grounds on Thursday.

Tami Bobo and Tristan De Meric’s Simplification galloped 1 ½ miles Monday on the last morning that the son of Not This Time will be the only contender for Saturday’s 147th Preakness Stakes (G1) training over the Pimlico Race Course racetrack.

Simplification, who captured the Fountain of Youth (G2) at Gulfstream Park, finished fourth in the May 7 Kentucky Derby, in which he closed from 15th to fourth while racing very wide.

The Antonio Sano trainee was the first to arrive at Pimlico Tuesday, May 10.

“I like how the horse is doing. He’s very happy,” Sano said.

Hall of Fame jockey John Velazquez will ride Simplification for the first time in the Preakness.

“He traveled well, so all is well, so far,” said trainer Saffie Joseph Jr., who arrived in Baltimore late Monday night. “He’ll go to the track tomorrow.”

Shortly after sunrise Tuesday, Alonso’s Novo Sol, who is entered in Saturday’s $250,000 Dinner Party (G2) on the Preakness undercard, will go to the Pimlico track, followed by Skippylongstocking.

Skippylongstocking, a son of 2016 Preakness winner Exaggerator is coming off a third-place finish behind Mo Donegal and Early Voting, respectively, in the April 9 Wood Memorial (G2) at Aqueduct. 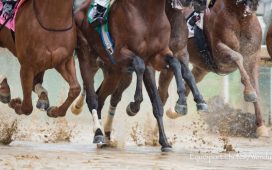 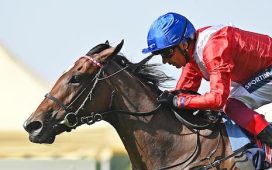 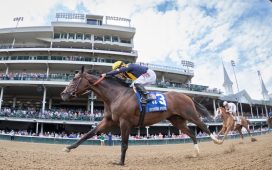