Dynamic One, a son of Union Rags out of the Smart Strike mare Beat the Drums. His respective second and fourth dam are champions Storm Flag Flying and Personal Ensign. Dynamic One was a $725,000 purchase from the Claiborne Farm consignment at the 2019 Keeneland September Yearling Sale.

Trainer Todd Pletcher shipped Dynamic One to New York from his winter division at Palm Beach Downs hoping for a performance worthy of pointing for the Grade 2, $750,000 Wood Memorial presented by Resorts World Casino on April 3, and the Union Rags colt delivered with a 5 ¼-length maiden score going 1 1/8 miles on Sunday at Aqueduct Racetrack.

The nine-furlong Wood Memorial is the final local prep for the Grade 1, $3 million Kentucky Derby on May 1 at Churchill Downs, offering 100-40-20-10 points to the top-four finishers.

Owned by Repole Stable, Phipps Stable and St. Elias Stable, Dynamic One tracked a leisurely pace from second, assumed command outside the quarter-pole and powered home a decisive winner while registering a 79 Beyer Speed Figure in his fourth-out graduation.

Dynamic One has kept quality company, having finishing behind subsequent Grade 3 Gotham winner Weyburn in his November debut at the Big A, where he was a distant ninth as the beaten favorite. He shipped to Gulfstream for his following two starts at 1 1/16-miles, which included a runner-up effort to eventual dual graded stakes-winner Greatest Honour on December 26.

“We were hoping for that type of effort,” Pletcher said. “He ran a good second at Gulfstream to Greatest Honour. We were unfortunate to draw the nine and eleven post in his last couple of starts at Gulfstream and it can be hard going a mile and a sixteenth from there. The intention was to see if he could earn his way into the Wood, and that’s what he did.”

Bred in Kentucky by co-owner Phipps Stable, Dynamic One is out of the Smart Strike mare Beat the Drums. His respective second and fourth dam are champions Storm Flag Flying and Personal Ensign. Dynamic One was a $725,000 purchase from the Claiborne Farm consignment at the 2019 Keeneland September Yearling Sale.

Pletcher will also be represented in the Wood Memorial by Grade 3 Withers runner-up Overtook, who is also being prepared at Palm Beach Downs.

Owned by Repole, and St. Elias Stable with Mrs. John Magnier, Michael Tabor and Derrick Smith, Overtook finished behind eventual graded stakes-placed Nova Rags and stablemate Known Agenda in his first two starts before rallying from 10 lengths off the pace to graduate at third asking going a one-turn mile at Aqueduct on December 20.

“He’s on target for the Wood also,” Pletcher said. “There’s a lot of options for a horse like him this time of year and we’ll play everything by ear, but right now the goal is the Wood. He’s trained excellent since the Withers.”

Also purchased form the 2019 Keeneland September Yearling Sale, Overtook was a $1 million acquisition from the Hill ‘n’ Dale Sales Agency consignment and is by multiple champion producer Curlin out of the Grade 1-winning A.P. Indy mare Got Lucky. He is a direct descendant of prestigious broodmares Numbered Account and La Troienne.

Pletcher also added that St. Elias Stable’s Known Agenda is on target for the Grade 1, $750,000 Florida Derby on March 27 at Gulfstream Park and will breeze at Palm Beach Downs on Saturday in preparation for the event.

Known Agenda, third in the Grade 2 Remsen in December at the Big A, finished fifth as the favorite in the Grade 3 Sam F. Davis in February at Tampa Bay Downs. The chestnut added blinkers when stretching out to nine furlongs in an optional-claiming event at Gulfstream on February 26 and romped to an 11-length score.

“He’ll breeze tomorrow morning with the Florida Derby in mind,” Pletcher said. “We added blinkers to him last time and that really seems to get his mind into the game.”

A Kentucky homebred, Known Agenda also is by Curlin and out of Grade 1-winner Byrama.

Shadwell Stable’s unbeaten graded stakes-winner Malathaat is nearing her return to action. She was last seen winning the Grade 2 Demoiselle on December 5 over a sloppy main track at the Big A.

Pletcher said that the Curlin bay filly out of Grade 1-winner Dreaming of Julia could return in either the Grade 2, $200,000 Gulfstream Park Oaks on March 27 or the Grade 1, $400,000 Ashland on April 3 at Keeneland.

“It will depend on how she breezes these next couple of weeks,” said Pletcher.

After giving Hall of Fame jockey John Velazquez his 2,000th Belmont Park victory in her October 9 debut, Malathaat was an easy winner of the one-mile Tempted on November 6 at Aqueduct en route to the Demoiselle. Her last work was a five-furlong move at Palm Beach Downs on March 6, completed in 1:01.89. 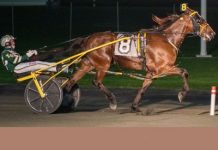