When Abby Mathews adopted 23-year-old parrot Sweet Pea in October last year, she knew the bird may be able to speak.

What she didn’t expect, however, was that she’d start re-enacting her past owners’ arguments, swearing and screaming throughout the day.

Sweet Pea also shouts ‘I’ve got bills to pay’, likely mirroring the fights that the people who owned her in the past had.

Author Abby said: ‘Her previous family were going through a divorce, and a very angry one.

‘We thought it was funny, until you think about the fact that she’s mimicking someone else’s unhappy relationship.

‘The rescue organization told us she had plucked her feathers, most likely from the stress of her previous owners’ divorce, which they believe is why she was turned over to the rescue.

‘Unfortunately, a lot of people don’t want a plucked bird. They might not have a lot of feathers, but they still have a lot of love to give.’

Abby has no ill will towards Sweet Pea’s previous family, and is instead just happy that she’s able to give the bird a brand new home.

The family actually find her outbursts funny, and have no plans to rehome her.

‘Sloves to say ‘ow you fucker’ so we’re assuming she did a lot of biting that would lead to someone saying that, and she calls people a**holes,’ said Abby.

‘The kids think it’s absolutely hysterical, and I have to tell them not to repeat it at school.’

Sweet Pea has also come with an added advantage in the parenting stakes, and Abby says, ‘When they’re arguing with each other I tell them they can’t teach Sweet Pea any more bad behaviour and the girls usually stop.

‘It makes them be nicer to each other. She doesn’t say anything that they wouldn’t pick up at school anyway.’

Abby said the cheeky parrot rules the roost, sneaking up on their pet poodle, Kosmo, and biting his tail, as well as munching on crisps.

‘She walks around the house and you can hear her little claws clapping along the floor so you know you’re going to have a visitor,’ said Floridian Abby.

‘I sit in her room at night when the kids are in bed trying to teach her to make farting noises. She does try and mimic the farting noises but she just hasn’t mastered it yet. I just pray she doesn’t learn to Amazon shop as one of her tricks.’

Although – because of her lack of feathers – Sweet Pea hasn’t yet been able to fly, the family hope that she’ll one day feel the wind beneath her wings.

MORE: Being the child of an alcoholic means the trauma stays with you for years

California street shut down after 40,000 bees swarm from hotel 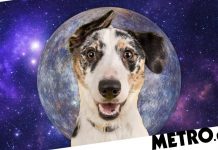 Can there be a Hollywood ending for the 'Brad Pitt of mountain lions'? 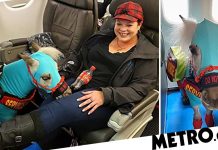 Flight Lines: the heroic story of two migratory shorebirds – and the man who followed them

Will we learn from the bushfire summer? Not if the wrong questions are asked

Why do whales migrate? They return to the tropics to shed their skin

Frozen bird turns out to be 46,000-year-old horned lark