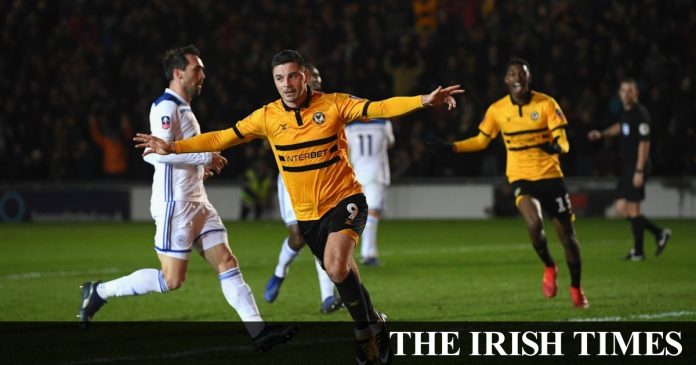 Reluctant as he seems to say it when so much is going wrong around him, times are good just now for Pádraig Amond, the Newport County striker from Carlow for whom the start of each new year comes with added media responsibilities these days.

The 32-year-old feels slightly guilty about coming across as so content in the time of coronavirus. But after traipsing around England for much of his career, Amond is well settled these days in Wales with his long time partner, now wife, Caoimhe and their newborn baby boy Eóghan with whom, it is all too apparent, he is profoundly smitten.

He has been juggling training, child minding and a fair few calls from journalists this week for his record in the FA Cup over recent years makes him an obvious choice for an interview before the third round. And Newport’s reputation as potential giantkillers, which he has helped to establish, is a large part of the reason Sunday evening’s game at home to Brighton will be one of the weekend’s more prominent televised games.

It is important stuff, more so than ever in these testing times for lower league football clubs. Newport have beaten Leeds, Leicester and Middlesbrough in the competition since Amond signed in August 2017 and had Manchester City and Tottenham round to their place, not bad for a side that has to win a couple of games just to get into the same hat as the big boys. The Irishman has scored 10 FA Cup goals during that time, several of them decisive in terms of securing a replay or progression.

In more normal times, a big name trebles the crowd at Rodney Parade and there is even more money to be made from the 45 per cent of gate receipts a visiting side gets from a game at a Premier League stadium. The competition’s prize money has been adjusted to make up for the absence of a crowd this year but the bigger pay-off inevitably comes in the form of TV money with Newport due around €160,000 for Sunday night’s appearance. That amount doubles for rounds five and six.

It might all be small beer to those in the top flight but when Leyton Orient had a good run a decade ago, the £1.4 million they made represented a third of turnover for the year. Amond is not sure about those sorts of specifics at Newport, but while friends at other clubs have seen their terms reduced during contract renewals during the summer or been obliged to take pay cuts, he and his team mates have emerged unscathed so far, the result he suspects of the rainy day fund amassed thanks to those recent cup runs.

“I’ve spoken to lads who have signed for clubs but had different clauses (mainly relating to crowds being allowed back into games) put in their contracts,” he says. “Other players have had to take wage cuts until the supporters are back. We were one of the lucky ones because we had safeguarded the club’s immediate future; let’s put it that way.”

The cup, though, is not all about the money to a club like Newport, though, far from it. The week leading up to a home game like Sunday’s would normally inject huge interest into the local community with less regular fans scrambling for tickets and everyone would want a word with the players as they go about their daily lives. All of that has been impacted by Covid-19 and the current restrictions.

“Look, it’s a different kind of buzz,” he says. “Before, you’d be going in to pick up a few things in the shops or whatever and you’d have supporters in their jerseys. You’d see the excitement and then they want to talk to you. But obviously at the moment you can’t be having interactions with people face-to-face.”

The players, Amond says, are relatively unaffected. Training and other club activities are more regimented and socialising is severely restricted with some of the usual dressing room banter moving online to WhatsApp groups. Yet the core group of players that have been involved in those other big cup games are keen to do it all again while for some of the newcomers, these are the sorts of occasions on which they were sold the attractiveness of moving to the club.

“It gives us an opportunity to go up against a Premier League team on TV, put in a good performance, and hopefully win because you’ll get another one in the next round. But also it’s a chance to kind of get momentum going in the league (in which, despite a recent blip, both he and the team have been going very well). And it’s a nice distraction as well. Maybe there’s a few more that expect us to win now after last couple years but as players we just expect to go and put in a good performance. There’s no pressure on us.”

Things will be that little bit trickier without a full house cheering them on but Amond is still convinced of the value of home advantage, especially when things are that little bit more rough and ready than the visitors might be used to and the Irishman doesn’t need 10,000 people in the place to know how much the game still matters to the locals; just now, more than ever perhaps.

“There are a lot of people out there who maybe their mental health has been affected by it, or maybe they just miss the fact that for 30 years or 40 years, every second Saturday, they were used to going to a game and now they can’t do it. You get feedback on the games through social media so there’s still a real sense that there are people out there are watching on iFollow and the like but people are suffering.

“So as a club we’ve made a really conscious effort to be proactive, to keep them involved and make them feel that we value them as supporters every bit as much as they value us as players.”

The sentiment suggests that Newport is a club with a real sense of its place in the community and Amond is clearly happy to have started his family there, even if he reacts with exaggerated horror to the suggestion that he is showing early signs of developing a bit of a Welsh accent.

There is some sadness, he admits, that Eóghan has not yet made the acquaintance of any of his wider family back home but, he says, “that’s the only really downside we’ve had and compared to what other people have gone through it’s not is not a huge thing to complain about, last year was actually a really good one for me.”

And beating Brighton, he knows, would brighten up the start of 2021 well beyond the walls of his own south Wales home. 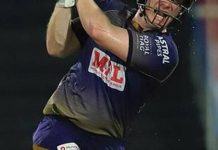 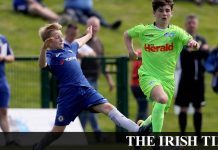 Adam Peaty optimistic that Tokyo Olympics will go ahead this summer 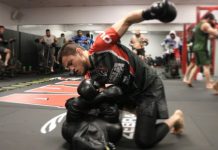 Ten transfer targets for Premier League clubs from across Europe 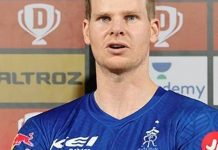 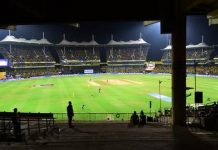 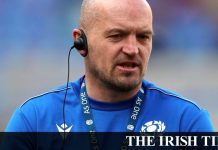 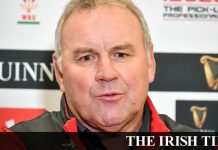