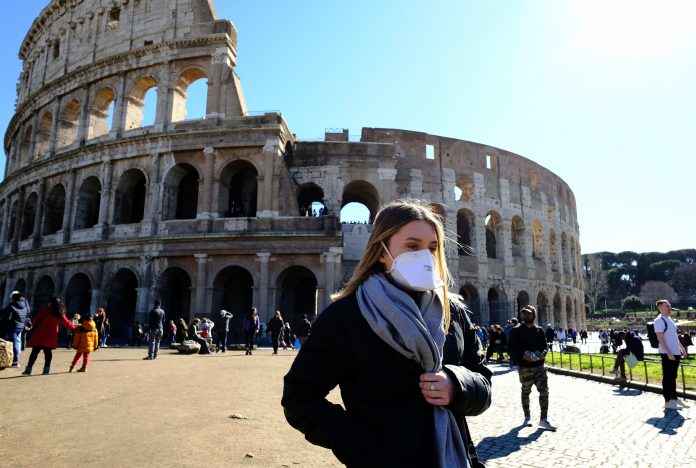 Tourist wearing a protective respiratory mask tours outside the Colosseo monument (Colisee, Coliseum) in downtown Rome on February 28, 2020 amid fear of Covid-19 epidemic.

The coronavirus pounded the European Union this week with the biggest test of its political, economic and social fabric since the refugee crisis of five years ago.

The ripples from the European migrant crisis of 2015 continue until today with its dual shock to the EU’s unity and domestic politics. It triggered a wave of populism and nationalism, the United Kingdom’s withdrawal from the EU, and Germany’s political fragmentation behind the weakening of Chancellor Angela Merkel.

Most dramatically, the Turkish government this week backed off from its commitment made in 2016, in return for 6 billion euros in EU funds, to prevent Syrian refugees from entering Europe. That followed a Thursday airstrike by Russian-backed Syrian forces in Syria’s Idlib province, killing at least 33 Turkish troops.

Even as Turkey ordered police, coast guard and border security officials to allow would-be refugees to pass into the EU, Bulgaria responded by sending an extra 1,000 troops to the frontier with Turkey and Greek police launched smoke grenades at one crossing to dissuade migrants.

Containing pathogens is a much different business than managing waves of refugees. However, what unites the two issues is how dramatically the European Union’s response will shape public attitudes about the institution’s relevance, responsiveness, and effectiveness at a crucial historic moment.

The impact of coronavirus on Europe’s future has the potential to be even more significant than the migrant crisis, particularly as it unfolds in almost biblical fashion atop a plague of other European maladies.

They include, but by no means are limited to: economic slowdown and possible recession (made more likely by coronavirus), the rise of populism and nationalism (stoked as well by the virus), disagreements about how to handle trade talks with a departing United Kingdom (which start Monday), internecine fights over the European budget, and ongoing German leadership crisis and French social upheaval.

The coronavirus morphed this past week into an increasingly global phenomenon that experts agree can no longer be contained. The hit to stock markets was $6 trillion, the biggest weekly fall since the 2008 financial crisis. By Friday, the WHO reported more than 78,000 cases and more than 2,790 deaths ion China – and 70 deaths in 52 other countries.

In Europe, what began as northern Italian phenomenon – where there have been more than 800 infections – has now reached Spain, Greece, Croatia, France, the UK, Switzerland, Romania, the Netherlands, Austria, Germany, Sweden, Norway, Belgium, Denmark, Estonia, North Macedonia, and San Marino.

Italians have cancelled their carnival celebration in Venice and Milan Fashion Week. European hotels –in Austria, France, and the Spanish Canary Islands– have been locked down in quarantine.

On 28, February 2020, migrants and refugees from Afghanistan, Iran and Pakistan boarded buses bound for the Greek border in a parking lot in the Zeytinburnu suburb of Istanbul, Turkey.

Though individual EU member states set their own health policies, the EU is responsible for coordinating response to the disease and providing advice regarding its still-open borders.

In most countries, citizens turn to national leaders for response in such situations. In a borderless European Union, which prides itself on free movement of people and travel, crisis response becomes a test of the institution itself and the philosophies behind this unique grouping of 27 member states with about 445 million citizens and $16 trillion GDP.

Thus, much attention this week was paid to whether and how individual EU countries – or the EU itself – might abandon the 1985 Schengen Agreement that brought 26 of its nations into a passport-free zone of travel.

This has been one of the greatest sources of EU pride and identity. At the same time, the agreement is designed to be far more flexible at moments of crisis than is generally known. The rules allow for the temporary reintroduction of border controls for reasons that include migrant surges, terror attacks and – crucial now – health emergencies.

“Paradoxically,” argues Benjamin Haddad, director of the Atlantic Council’s Future Europe Initiative, “one might argue that moments like these are made for the European Union.”

That’s because, Haddad explains, such moments require the level of technical cooperation and shared decision-making among countries that is the very basis of the European Union. The EU acts as a regulatory superpower through the “normative” power of its trade deals and other instruments that impose standards, which often become global, in areas including digital, health, environmental, and all manner of industrial sectors.

Yet, if imposing regulatory norms is an EU strength, rapid response at times of crisis remains a weakness.

When it comes to scenarios such as the refugee crisis or coronavirus outbreak, member states often take back control, as they did in 2015.The coronavirus will give new ammunition to those who want national border controls tightened or restored.

Marine Le Pen, the right-wing French nationalist, has called for border closures with Italy. In Switzerland, not an EU member but part of the border-free zone, right-wing political leader Lorenzo Quadri said it was “alarming” that the open borders’ “dogma” would be considered a priority at such a time.

As the number of coronavirus cases grows in Europe, it seems unlikely that EU and national officials will be able to avoid the greater imposition of border controls. On Sunday evening, for example, Austria halted some train connections at the Brenner pass with Italy after officials reported that two passengers had been stopped who were infected with the virus.

If the EU and its member states respond smoothly and in a coordinated fashion, the coming days could reinforce the collective value of the European Union.

Should the EU appear ineffective as the virus spreads, that will color European attitudes for decades to come.

In his classic 1945 novel The Plague, the French writer Albert Camus writes, “I have no idea what’s awaiting me, or what will happen when this all ends. For the moment I know this: there are sick people and they need curing.”

“The virus, alas, has so far been tackled by a divided continent, just like the plague isolates people in Camus’s plot,” Gianni Riotta, a visiting professor at Princeton University, tells Judy Dempsey at Carnegie Europe. “Austria scrapped trains from Italy, Italy broke with the European Union, too hastily grounding flights from China, only to see the disease spread faster with passengers arriving unchecked from other airports.”

It’s not too early to ask whether Europe itself will fall victim to the virus – or emerge healthier from the challenge. 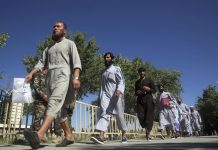