With a trio of promising 3-year-olds in his extensive stable, Doug O’Neill is looking forward to the New Year, with a third Kentucky Derby victory high on his wish list.

Wearing blinkers for the first time, Wipe the Slate, a son of O’Neill’s 2016 Derby winner Nyquist, scored an impressive maiden win Dec. 26 at Santa Anita after finishing second in his debut to undefeated Sham Stakes winner Life Is Good at Del Mar last Nov. 22. Nyquist is America’s leading freshman sire who stands for $75,000 at Darley‘s Jonabell Farm in Kentucky.

O’Neill also won the 2012 Run for the Roses with I’ll Have Another.

“Hot Rod Charlie is doing great and we’re pointing him to the Bob Lewis,” said O’Neill, referring to the Grade 3 Robert B. Lewis Stakes at a mile and a sixteenth on Jan. 30.

Named in memory of businessman and Thoroughbred owner Robert B. (Bob) Lewis, whose horses regularly ran at Santa Anita, and who won the Kentucky Derby and Preakness with Silver Charm in 1997, the Lewis offers 10 Kentucky Derby qualifying points to the winner, four to the runner-up, two to the third-place finisher and one to the fourth. It was first run in 1935 as the Santa Catalina Stakes.

“Wipe the Slate is doing super but I’m not sure where he’s going to blend in after that win,” O’Neill said. “It’s been two weeks so we really haven’t pointed him to the next spot.

“Team Merchants had a little injury so he’s at the farm until he’s 100 percent,” O’Neill added, alluding to principal owner J. Paul Reddam’s Ocean Breeze Ranch in Bonsall. Reddam Racing owned a pair of O’Neill-trained Kentucky Derby winners, I’ll Have Another (2012) and Nyquist (2016).   O’Neill and Reddam also teamed up to win the Lewis with Great Hunter in 2007 and I’ll Have Another in 2012.

Not surprisingly, O’Neill had 32 starters through the meet’s first nine days, six more than any other trainer. He was first in that category at Del Mar and generally is leader of the pack in Southern California.

“We’re just enjoying every day and hoping for even better days ahead,” O’Neill said. “We’re optimistic. I don’t know how smart it is (having the most starters), but you can’t make any money sitting horses in the barns, so if they’re doing well, we’ll let ’em compete.”

‘A Special Filly In Every Sense Of The Word’: Breeders’ Cup Winner Sharing Retired Due To Injury 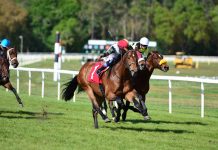 Jockey, Trainer Trends At Oaklawn: Geroux Versus Santana; Asmussen Still The One to Beat

Without Historical Horse Racing, ‘There Is No Realistic Path Forward For Ellis Park’