'One of the worst referees in history': Fans react as Jon Moss left Huddersfield 'absolutely robbed'


‘One of the worst referees in the history of football!’: Fans react as Jon Moss leaves Huddersfield ‘absolutely robbed’ after denying TWO penalty claims in his final game as an official… as supporters lament VAR as ‘baffling’ following play-off final

By James Cohen For Mailonline

Fans on social media have labelled Jon Moss’ refereeing performance in the Championship play-off final as ‘absurd’ after he controversially refused to award Huddersfield two penalties.

The Terriers were beaten 1-0 by Nottingham Forest in a thrilling final at Wembley, where a Levi Colwill own-goal was enough to separate the sides and send Steve Cooper’s team to the Premier League.

However, fans online were quick to call out official Jon Moss after Huddersfield were denied two seemingly blatant penalty calls. 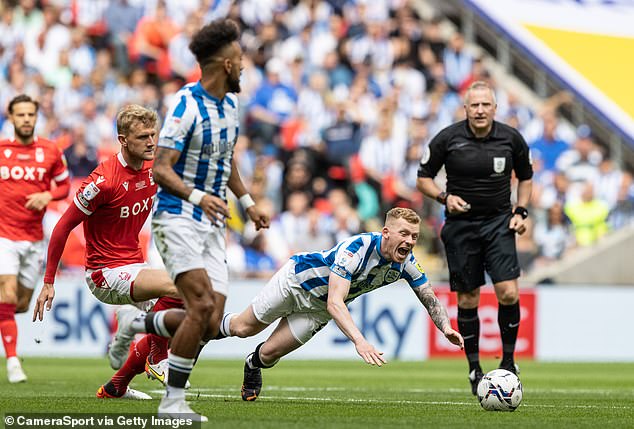 Twitter users did not hold back when describing Moss’ performance, with one fan suggesting the FA ‘launch a serious investigation’ into the officiating.

@DamianPoutney said: ‘Jon Moss is by far one of the worst referees in the history of football, makes shocking decisions almost every game. Huddersfield have been absolutely robbed of at least 1 penalty there, if not 2!’

‘How were these not given as penalties in the first instance? The fact they were then missed by VAR on both occasions is baffling. It just can’t happen in a game of this magnitude,’ @AntoniF14 tweeted.

Another used suggested that Moss’ decisions ended up ‘costing a club huge rewards’ – given the financial benefits of winning the play-off final.

Levi Colwill’s own-goal proved the difference in the end but fans say Moss had a huge impact on the game after ruling that Jack Colback did not foul Harry Toffolo in the area midway through the second-half.

As the Terriers searched for an equaliser, Toffolo was brought down in the box by Colback – with VAR showing clear contact – but Moss instead decided to book the Huddersfield man for simulation.

Shortly after, Carlos Corberan’s side thought they were finally going to be awarded a spot kick after Lewis O’Brien was clearly tripped by Max Lowe – but again Moss and VAR decided that there was nothing to it.