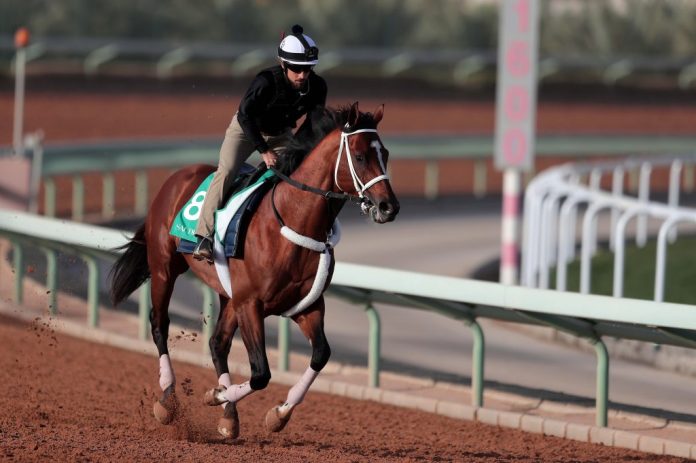 With bone-chilling temperatures, ice, and snow still in the forecast for Arkansas, racing at Oaklawn Park in Hot Springs has been canceled for the second weekend in a row.

That leaves leading Kentucky Derby (G1) contender Essential Quality with another week of training before for his much-anticipated 3-year-old debut in the Southwest Stakes (G3), now rescheduled for the weekend of Feb. 25-28.

Five graded stakes races carded for this weekend are rescheduled for the following weekend, the track said in a Twitter post late Monday night.

Bart Lang, the Oaklawn Stakes Coordinator, said in a tweet on Tuesday that nominations are reopened for the Southwest, Razorback, Spring Fever, Bayakoa, Dixie Belle and Downthedustyroad through Friday [Feb. 19] at noon CT.

Essential Quality, the 2-year-old male champion, is currently training at the Fair Grounds in New Orleans. Trainer Brad Cox, who also trains two-time Eclipse Award champion Monomoy Girl [still set to run in the Bayakoa in her 6-year-old debut], said a two-week delay isn’t a huge problem. The Southwest and Bayakoa are still the targets.

“They have been working steadily and are ready to run,’’ Cox told bloodhorse.com. “We worked them this weekend when they were supposed to race, and we’ll breeze them again this weekend to prep for the races next weekend. … We’ll ship them up when the weather clears.”

The road to the Derby could change for Essential Quality. Instead of the Louisiana Derby (G2) on March 20, the next – and final — Derby prep for the colt could be the Blue Grass (G2) at Keeneland on April 3 or the Arkansas Derby on April 10.

The payouts are huge in the $20 million Saudi Cup, so huge that even finishing in 10th place in a likely field of 14 horses allows the owner to take home some dough.

Finishing fifth and being considered an also-ran is worth $1 million. Not bad, right? The purse for the Kentucky Derby is $3 million, with $1.86 million to the winner. A fifth-place finish earns the owner a ‘paltry’ $90,000.

In last year’s inaugural Saudi Cup, Maximum Security won, but the $10 million winner’s share is still being withheld until an investigation is complete following the indictment of the horse’s former trainer, Jason Servis, and others, regarding performance enhancing drugs.

The runner-up, Midnight Bisou, earned $3,5 million for her owners, but that could change depending on a final resolution by Saudi racing officials.

The New York Racing Association recently announced that its spring/summer meet at Belmont Park will feature 48 stakes worth $16.95 million over 48 days, from April 22-July 11.

As usual, Belmont Stakes (G1) day is centerpiece of the meet on June 5, with eight Grade 1 stakes, and a Grade 2.

The Jaipur, Met Mile and Ogden Phipps are Breeders’ Cup “Win and You’re In’’ races.