Trainer Aidan O’Brien’s 10 Breeders’ Cup hopefuls stepped out on the track at Keeneland for the first time on Thursday, and he later spoke to At The Races about some of their chances for Friday and Saturday’s World Championship contests.

The likely favorite for Friday’s Breeders’ Cup Juvenile Turf will be Battleground, the 2-year-old first foal out of 2015 Breeders’ Cup Turf winner Found. That edition of the World Championships was also held at Keeneland, so it would be especially poignant if Battleground could deliver a Breeders’ Cup victory over the same course.

Thus far, Battleground has raced three times and won twice, including a win in his most recent start, the Group 2 Vintage Stakes at Goodwood on July 28.

“That day in Keeneland with Found was unbelievable,” O’Brien told At The Races. “(Battleground is) big, powerful, strong, and he’s very like Found, his dam, and then he has this pace from War Front as well. So he’s a horse we’re looking forward to running.

“He’s in good order and it looks like the time has done him really well. He hasn’t ran since Goodwood, so you’d be very happy with him. Of course, it’s going to be good experience for him and I think we’re going to learn a lot about him. I think he’s a horse maybe to really look forward to seeing what he’s going to do.”

Magical, trained by Aidan P. O’Brien, exercises in preparation for the Breeders’ Cup Turf at Keeneland Racetrack in Lexington, Kentucky on November 5, 2020.

Additionally, O’Brien will send out 2018 Breeders’ Cup Turf runner-up Magical in this year’s edition of the $4 million contest. The seven-time Group 1 winner was defeated three-quarters of a length by champion Enable in 2018, and is in search of redemption in this year’s contest.

The 5-year-old Galileo mare has won three Group 1 races this year alone and has not finished worse than third all season. Her victories include a 3/4-length triumph over Ghaiyyath in the G1 Irish Champion Stakes, a horse who was at that time considered the best in Europe this year.

“She’s an unbelievable filly,” O’Brien told At The Races. “She’s ran at the top level all the time, from the time she’s a 2-year-old every year, she’s danced every dance, traveled everywhere. She’s very brave. She’s very comfortable, really, from a mile to a mile and a half, which is very unusual. She’s very brave, stays well, good mind. She’s an incredible mare really.

“Everyone loves her and she’s very special.”

“Everyone loves her and she’s very special” 🥰

Aidan O’Brien on Magical, all set for another tilt at the Longines #BreedersCup Turf and there’s no Enable in her way this time… #BC20 pic.twitter.com/mLVPmqhZd3

The Friday Show Presented By Breeders’ Cup: Hoping To ‘Raise The Bar’ With Our Handicapping 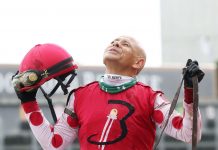 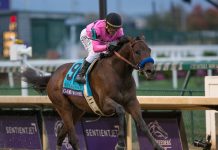 Versatility ‘Never Hurts’: United Could Be The Early Leader Or Could Stalk Pace In The Turf

Stall: The 3-Year-Olds Are The X Factor In This Year’s Classic 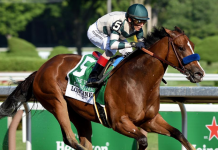 ‘The Light In Our Lives’: Andie Biancone Enjoying The Ride With Breeders’ Cup Hope Diamond Oops