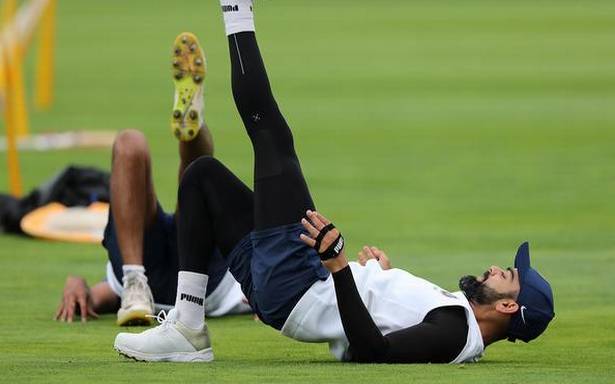 Green grass on the surface greeted the Indians at the Hagley Oval. The New Zealanders are not in the mood to concede an inch as the Indians seek to square the series.

And, India has won just one Test in this country in a span of 30 years. It’s a demanding ask.

The New Zealanders are expected to play an all-seam attack here with the lion-hearted Neil Wagner coming in for Ajaz Patel.

On view will be a high-voltage Kiwi pace attack with Wagner, the hustler with his short-pitched stuff, joining the classic left-right new-ball pair of Trent Boult and Tim Southee, not to forget the lift and movement of Kyle Jamieson or the control and swing of Colin de Grandhomme.

India is likely to make one change. Ravindra Jadeja is expected to come in for R. Ashwin.

It’s essentially a move to strengthen India’s batting with the left-handed Jadeja becoming solid and being able to construct an innings with judicious strokeplay in recent years.

With the ball Jadeja offers control, holds one end up, can pick up a wicket or two. In the second innings Jadeja, if the ball grips, could be a bigger factor. To top it all, he is among the finest all-round fielders in the world.

To be fair to Ashwin he bowled well at Wellington, doing the difficult job against the wind, getting some drift and dip and scalping three. If India had not run into problems with its batting, he could have held his place.

But then, India finds itself in a situation where it needs to strengthen its batting in order to give its bowlers sufficient runs for a victory push. And this is where the drying up of runs from Ashwin’s willow has made him vulnerable. The team looks at him as an all-rounder.

Also read: The influencers in Indian cricket in the last half century

It’s a tough call and if Ashwin finds himself dropped, he could consider himself unlucky. However, given the team’s needs away from the sub-continent, he has to rediscover his batting mojo.

India will be hoping to win the toss and insert New Zealand. On a fresh, green track, the Indian pace attack could sting. However, Jasprit Bumrah and Mohammed Shami have to pitch the ball up and allow it to swing. If they are looking for movement off the seam, they have to bowl good length, not back of a length.

And, if India loses the toss, it faces a much tougher path to victory. The side has to find the balance between offence and defence.

The Indian batsmen cannot afford to get into a defensive rut and allow the Kiwi bowlers to dictate play. Kohli and his men have to win the mind game. The Indians will have to push the New Zealand pacemen off their game-plan and do so without being reckless.

The key to succeeding on the New Zealand pitches is to play the ball late. These are not the sort of conditions where you hurry your shots or go at the ball with hard hands; there is a cordon waiting for just that.

The advantage of playing the ball late is that you cover for the movement and have the opportunity to place your strokes. Just watch how Kane Williamson bats in these conditions.

He plays the ball late and without any exaggerated movement. Everything about his batsmanship is measured, crisp and precise. And he times the ball.

The wind at the Hagley Oval is not expected to be as big a factor as at the Basin Reserve. So the batsmen would not have problems holding the bat and adjusting their back-lift against the stiff breeze.

New Zealand’s strength is planning and execution. India has to counter the Kiwi moves. It’s a game of chess really.