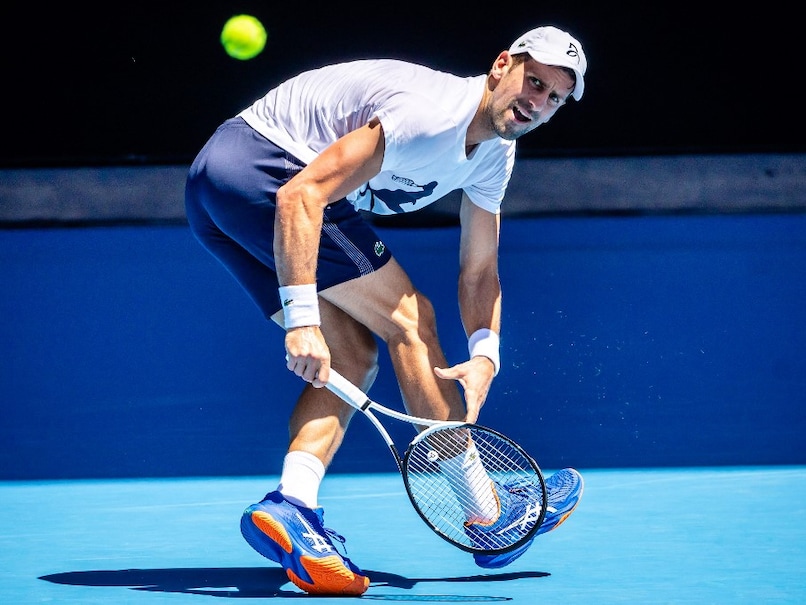 The Serbian superstar is back in Melbourne after his deportation last year.© AFP

Nine-time Australian Open champion Novak Djokovic reportedly cut short a practice match against Daniil Medvedev on Wednesday because of a left hamstring issue, five days before the Grand Slam. The Serbian superstar is back in Melbourne after his deportation last year but required treatment and then ended the knock-about with the Russian after losing the first set. The session at Melbourne Park was supposed to last 75 minutes but was instead curtailed after just over half an hour as a precaution, the ABC and 9News Melbourne reported.

“It’s the hamstring that I had problems with in Adelaide last week,” Djokovic said, according to 9News.

“I just felt it pulling and I didn’t want to risk anything worse. I played a set and apologised to him (Medvedev) and he was understanding.

“I just want to avoid any bigger scares before the Australian Open,” he said.

Djokovic, who won the Adelaide crown on Sunday despite the lingering hamstring issue, is hot favourite to triumph in Melbourne once again.

The 35-year-old is supposed to play Nick Kyrgios in a re-run of last year’s Wimbledon final on Friday in front of a full house at Rod Laver Arena in another practice match.

Djokovic, one of the finest men’s tennis players of all time with 21 major crowns, was deported from Australia a year ago over his stance on Covid vaccines.