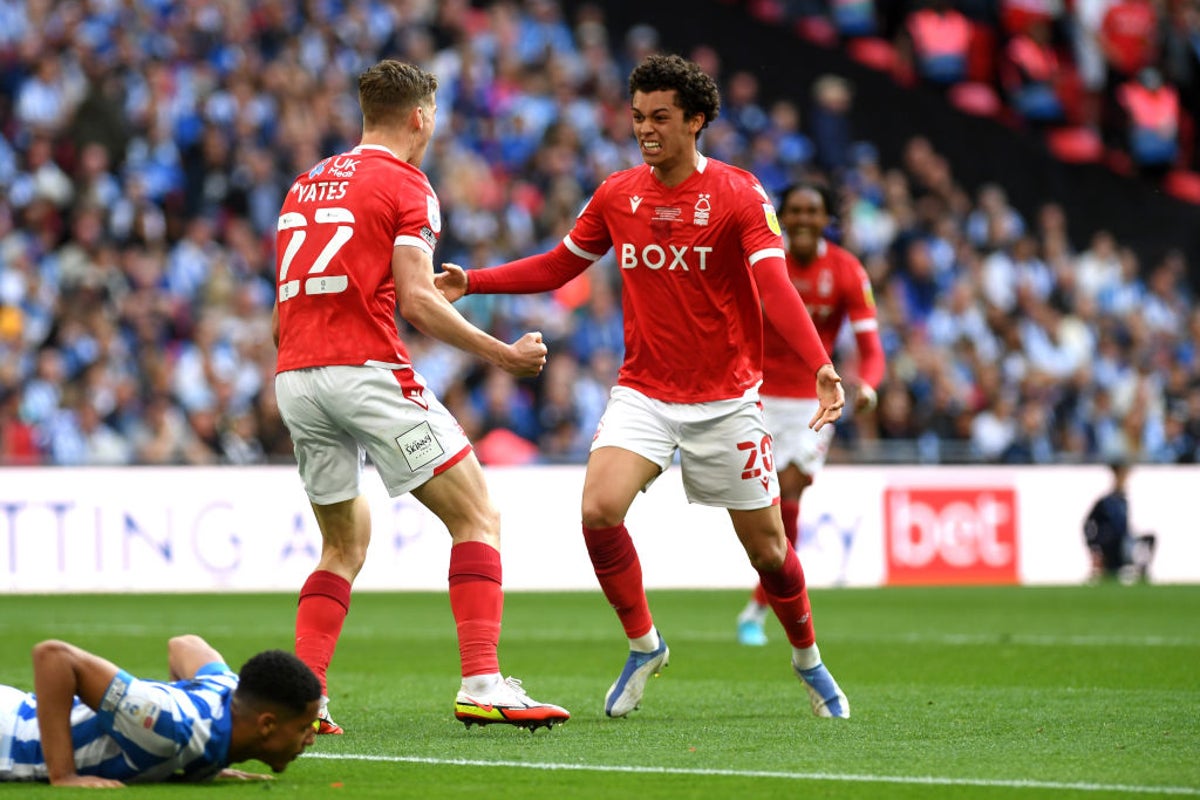 Steve Cooper’s remarkable nine-month reinvention of Nottingham Forest gave birth to a belated new era at Wembley on Sunday. After 23 years of chaos, yearning and heartbreak, and a season in which Forest were rock bottom of the Championship in September, their resurrection to the Premier League was rendered complete as Levi Colwill’s cruel own goal settled a tense and scrappy play-off final against Huddersfield.

Carlos Corberan will have every right to feel aggrieved, having seen two credible penalty appeals waved away in a frenzied second half, but fate – and Jon Moss – refused to budge. They are the fine margins worth hundreds of millions in this unique fixture that wagers all the travails of the season on a knife-edge. On this occasion, no matter how Huddersfield tried to wrestle an equaliser, the game seemed destined to tilt in Forest’s favour.

There was ecstasy at last for their players at full-time. Nottingham locals Joe Worrall and Ryan Yates were raised in the shadow of the club’s decline. Others like Brennan Johnson and Djed Spence, who weren’t even born when Forest were last in the Premier League, inherited the burden of that history. But the fans in the stadium knew that pain intimately and immense credit must go to Cooper, twice a loser in the play-offs with Swansea himself, for how he has exorcised those demons against all odds. Forest’s return to the top-flight is a romantic addition long overdue, but that will be no consolation to a Huddersfield squad left splayed across the turf in despair, left to rue what might have been.

It is a different kind of euphoria that swirls around the play-off final ahead of kick-off: it’s the chants on Tube trains; the family photos set against flares down Wembley Way; the scents of pre-mixed cocktail cans and nervous final drags on the last cigarette. For a while, that collective fear and hope offset the tribalism. But then the whistle goes, the party atmosphere subsides, and the scale of the next 90 minutes comes into focus.

Forest’s fans have craved this for generations and were loudest throughout, especially after Spence ran over to rally them right before kick-off. It was that sort of fearlessness that has galvanised the club, and the 21-year-old full-back was the clearest source of danger down the right flank, too.

It would be understandable if the stakes of this game bred a sense of caution, but they only made it more haywire. It was hectic and frantic, wide open and wide-eyed as both sets of players tried to find their feet on the biggest stage of their careers. A cunning flick from Johnson played through Philip Zinckernagel and he was promptly scythed off his feet by Naby Sarr. From the resulting free-kick, Yates’s angled header drifted wide at the far post by a matter of inches.

Forest had the early momentum, dominating possession as Spence wreaked havoc on every burst forward, but there was an air of composure lacking and Yates snatched at a shot from the edge of the box when Johnson was better positioned. Huddersfield remained true to the principles that have brought such success under Corberan this season, keeping compact and disciplined, poised to surge on the counter-attack. Sorba Thomas was always the outlet, lurking in the space vacated by Spence, and forced Brice Samba into his first save around the half-hour mark. The chance seemed to free Huddersfield from their stranglehold. Danny Ward was next to target that left channel and was met with a crunching slide tackle from James Garner, but the corner brought the Terriers’ best chance as a neat training ground routine saw the ball fed to Ward at the edge of the box, whose shot was deflected over the bar.

It was the sort of tension-laden game where nothing was clear-cut, but something had to give. And, on the brink of half-time, the deadlock was finally broken. Garner was afforded space and angled a speculative shot towards the far corner from 35 yards out that bounced awkwardly in front of Colwill, whose vision was obscured by Yates in front of him. The young Chelsea loanee stuck out a knee in desperation but succeeded only in diverting the ball into his own net. It was a cruel twist of fate for Colwill, who has been outstanding this season, and left Huddersfield with a tide to hold back as the red half of Wembley descended into raptures.

The drama was heightened in the second half, with Huddersfield forced to play their hand and leave themselves exposed. Keinan Davis broke down the left, nutmegged Tom Lees for good measure and angled a ball across the face of goal towards Johnson. This time, though, Colwill’s vital interception was perfectly executed and Huddersfield’s pressure began to stir panic in Forest’s defence. Lewis O’Brien began to control the tempo in midfield and a tempting cross brought a corner that Jonathan Hogg met at the near post but couldn’t keep down.

Corberan waved his players forward and reverted to a back four, with Jon Russell replacing Sarr. He found Thomas almost immediately, who had switched to the right flank but Scott McKenna was alert to the danger and made an urgent clearance. For all Huddersfield pushed, Samba was rarely threatened in goal. The inevitable heart-in-mouth moments instead orbited around Moss, who was taking charge of the final game of his own career.

In the 73rd minute, Duane Holmes surged in behind and cut the ball back to Harry Toffolo, whose right leg took a nick off Jack Colback in the box. Toffolo fell theatrically and was booked for diving, but there was certainly contact. VAR deemed there to be no clear and obvious error, but Huddersfield certainly had reason to claim injustice.

That sense will only have been amplified by the second incident that followed soon afterwards when O’Brien was clumsily bundled over from behind by Max Lowe. Moss’s view of the challenge was obscured but why VAR didn’t intervene is a mystery worth a fortune. From there on, it felt clear that nothing could grapple this historic victory from Forest’s hands.

Samba provoked fury with his time-wasting, with Ethan Horvath substituted on as the game crept into stoppage time, but there was no chink of light for Huddersfield, no last Hail Mary. The final whistle blew and all of Forest’s pent-up emotion was finally unleashed.