“We recently submitted a bid to purchase the Arlington International Racecourse property,” said Bears president and CEO Ted Phillips. “It’s our obligation to explore every possible option to ensure we’re doing what’s best for our organization and its future. If selected, this step allows us to further evaluate the property and its potential.”

The Bears are the second known bidder for the 326-acre property that has hosted horse racing since 1927. A group led by former Arlington president Roy Arnold issued a statement on Tuesday saying it has submitted a bid to develop a portion of the property while continuing racing at the northwest suburban Chicago track. Arlington Heights Mayor Thomas Hayes told the Chicago Sun-Times on Wednesday that he had met with “less than 10” potential bidding groups before a 5 p.m. CT Tuesday deadline to submit bids on the property.

The Bears currently play at Soldier Field along Lake Michigan just south of downtown Chicago. That stadium, which first opened in 1924,  was renovated at a cost of $400 million earlier this century, reopening in the fall of 2003.

The Bears are owned by the heirs of the late George Halas, who owned and coached the team and first raised the possibility of moving the team to the suburbs nearly 50 years ago.

If Arlington Park becomes the new home of the Chicago Bears, it would be the second historic racetrack that had been owned by Churchill Downs Inc. to be developed into an NFL stadium. Hollywood Park in Inglewood, Calif., was sold in 2005 by Churchill Downs to the Bay Meadows Land Company, which operated the track until 2013. It was demolished the following year for the construction of SoFi Stadium, since September 2020 the home of the Los Angeles Rams and Los Angeles Chargers.

Churchill Downs Inc. shocked the Illinois racing industry when it opted not to apply for a casino license at Arlington following passage of an expanded gambling bill giving Illinois tracks something they had sought for more than 20 years. Churchill Downs Inc. is majority owner of Rivers Casino in nearby Des Plaines, and the company is seeking a casino license in Waukegan, north of Chicago. 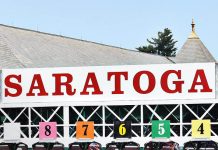 Riders Up For The Race To A Jockey Title At Saratoga

Hope In Him, Lightening Larry Square Off Again In Dr. Fager

Move-In Date At Laurel Pushed Back To Aug. 10 As Work On Track Surface Wraps Up