The Cowboys didn’t earn many style points in Thursday night’s victory against the short-handed Titans. But a win is a win is a win. And this win improved Dallas’ record to 12-4 with a Week 18 matchup against Washington still to come. The Cowboys will be in the playoffs, likely as a wild card and the fifth seed in the NFC.

The Titans, on the other hand, fell to 7-9 with the loss and could be on the outside looking in at the postseason — unless they can beat the red-hot Jaguars in Week 18.

But wait — there’s much more of Week 17 still to come. Who has the edge in an important AFC East matchup? Can Aaron Rodgers keep the Packers in playoff contention against the Vikings? And what should we expect as Josh Allen and Joe Burrow square off Monday night in Cincinnati? The Athletic’s Chad Graff, Mike Jones and Mike Sando dish on what they’ll be watching.

The Broncos made big news this week by firing head coach Nathaniel Hackett after 15 games. What do you think of the move, and how will this affect Russell Wilson and company as they travel to Kansas City to face the Chiefs on Sunday?

Graff: This seemed like weeks in the making as the Broncos seemed to find new lows every game. This becomes one of the most intriguing job openings. A year ago, it was a highly coveted position with a young roster and cap flexibility. Now, there’s a chance the new coach is walking into one of the worst contract situations in a long, long time. At first glance, it seems like few coaches should be interested. But coaches don’t get to this level without a fair amount of bravado, so the guess here is that the Broncos job will still generate tons of interest from the top coaching candidates who will talk themselves into believing they can “fix” Wilson.

Jones: It’s unfortunate any time someone loses their job, and I really enjoyed every one of my interactions with Nathaniel Hackett. But this move was inevitable. He just didn’t have it as a head coach. But, hopefully, this is an experience he can learn and grow from.

I don’t think firing Hackett will do anything to ignite the Broncos. I also don’t think that Hackett deserves all of the blame. General manager George Paton should not be exempt from criticism. He’s the one who hired Hackett to be a head coach despite not having play-calling experience, and he’s the one who not only traded for Russell Wilson but also gave him a massive contract extension before even seeing how he fit with what Hackett wanted to do. You can miss on a coach, and you can miss on a quarterback. But you can’t miss on a coach and a quarterback in the same year and expect to be safe.

Sando: The Broncos look like they have their bags packed with their cars idling in the parking lot, ready to drive off into the offseason. Maybe Jerry Rosburg rallies the troops and the effort is a little better this week. I just don’t see a big improvement.

With Tua Tagovailoa in the concussion protocol and Teddy Bridgewater getting the start, what are you expecting from the Dolphins and Patriots in New England? Which of these teams has a better shot at sneaking into the postseason?

Graff: I may be in the minority here, but I’m going with the Dolphins. I don’t think the difference between Tagovailoa and Bridgewater is so drastic that Miami’s playoff hopes take a massive hit without its starter. It’s not easy to play against a Bill Belichick-led defense for the first time, as Bridgewater will do Sunday, but he has two great receivers going up against a cornerback group from New England that is incredibly banged up. Plus, Bridgewater only has to outscore a Patriots offense that ranks among the league’s worst. I’m going with the Dolphins.

Why the Patriots’ banged-up secondary could decide Sunday’s must-win game vs. Dolphins

Jones: The Dolphins got the Patriots the first time around, but I’d be really surprised if Mike McDaniel manages to sweep Belichick. Bridgewater will do a serviceable job, but in the second half of the season, defenses seem to have a better read on Miami’s offensive schemes and McDaniel hasn’t shown much of a counterpunch.

Sando: I anticipate a game along the lines of the Week 1 matchup between these teams, with the difference being that New England now will have a much better feel for what the Dolphins are doing offensively. This is a game the Patriots should win.

Prior to the season, not many people would have circled a Week 17 matchup between Carolina and Tampa Bay as being vital to the NFC playoff picture, but here we are. How do you see this one playing out?

Graff: Tom Brady isn’t going to miss out on the playoffs because of a home loss to a bad Panthers team that ranks in the bottom 10 in the league in both offensive and defensive DVOA, right? Right?! This Buccaneers team seems to continually play down to its opponent, so this will probably be decided in the last couple of drives, but I’ll take Brady to do just enough to beat the Panthers.

Jones: The Buccaneers should be able to win this game. However, they’re only three-point favorites and haven’t strung together consecutive wins since Weeks 9 and 10. In fact, the Bucs have only won consecutive games twice all season. Steve Wilks’ Panthers look like the hungrier of the two teams. Carolina for the win!

Sando: I’m with the Panthers on this one because even when the Buccaneers win, it’s typically against a bad opponent and doesn’t look very convincing. Carolina is playing with tons of energy, and I’m just not sure if Tampa Bay can get up for this matchup, despite the stakes. 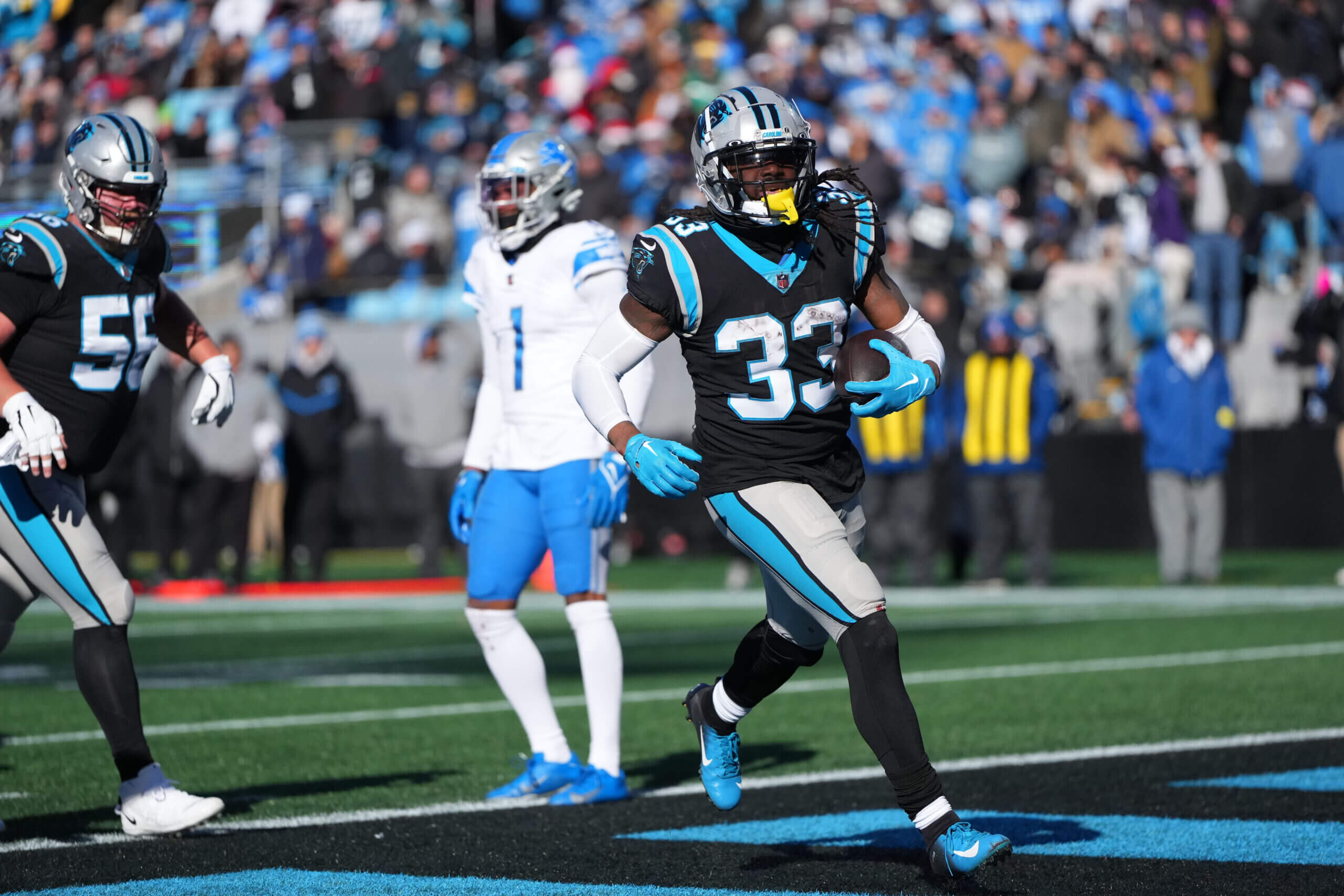 Panthers running back D’Onta Foreman totaled 165 yards and a touchdown on the ground in last week’s win over the Lions. (Bob Donnan / USA Today)

In Sunday’s late-afternoon window, Minnesota travels to Green Bay for an intriguing divisional tilt with the Packers. Can Aaron Rodgers keep the Pack’s playoff hopes alive, or will the Vikings continue their magical regular-season run?

Graff: The Packers’ opponents during this three-game winning streak aren’t impressive — they beat the Bears, Rams and Dolphins. But the efficiency numbers still back up what the Packers are doing since mid-November. Since Week 10, the Packers rank sixth in the league in offensive EPA per play. The Vikings have done well at Lambeau Field in recent years, but that was with Mike Zimmer’s defenses facing Rodgers. Against this Minnesota defense, Rodgers should have no trouble moving the ball and putting up points. I’m going with Green Bay to win a fourth straight.

Jones: Given the way the Packers struggled against Miami (and only won because Tua gave the ball away three straight times in the fourth quarter), it’s hard to envision them being much of a threat to the Vikings. But maybe desperation has set in and they’re amped up enough to extend this win streak to four games.

Sando: I loved how Rodgers planted the seed with Pam Oliver after the game that two dome teams would have to visit Lambeau over the final two weeks. The Vikings fit that bill, but I like their chances in this game because I don’t think Green Bay is very good and I don’t see Kirk Cousins throwing three fourth-quarter interceptions the way Tagovailoa did last week.

The biggest game on paper this week is the Monday night tilt between the Bills and Bengals in Cincinnati. Who has the edge as these teams continue to fight it out for the top seed in the AFC?

Graff: I’m taking the Bengals at home. Since Week 9, they have the best offense in the NFL according to EPA per play, one spot ahead of the Chiefs. The Bills, meanwhile, rank 11th. Time is running out for them to return to the form we all expected as season-long Super Bowl favorites. So give me Joe Burrow at home.

Jones: I think the Bengals can get the job done again. They’re the hottest team in the league, riding a seven-game win streak, and I don’t see any reason why they can’t continue this brand of complementary football that is carrying them. Joe Burrow and his defense have already bested Patrick Mahomes. Josh Allen is next.

Sando: The Bengals at home have been my choice in this game for the past few weeks, and I’m sticking with it. They should get Josh Allen’s best punch, which could be enough for the Bills to win. I just like how Cincinnati has been playing and think they should be able to pull this one out at home.

What is the most interesting storyline of Week 17 that we haven’t yet discussed? What are you personally most excited to see?

Graff: A path to the playoffs is very much available for the Lions after winning six of their last eight games, but it will probably require a win this weekend against the Bears to remain so. These are two fun teams to watch, and they rank last (Lions) and second-to-last (Bears) in defensive EPA per play. So expect plenty of points as Jared Goff tries to keep his resurgent season rolling.

Jones: I have two: 1) Can Carson Wentz get back in the saddle after nine weeks on the sideline and help the Commanders secure a playoff bid? And 2) Can the Steelers, who have won four of their last five, beat the Ravens to improve to 8-8, keep their playoff hopes alive and extend Mike Tomlin’s streak of seasons without a losing record to 16?

Sando: Seahawks quarterback Geno Smith is facing his old team, the Jets, in a game that could extinguish the flickering playoff hopes for whichever team loses. What were the chances a scenario like this would play out in this way? 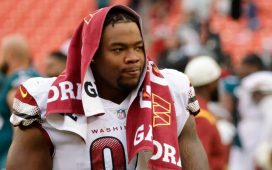