Commanders HC Ron Rivera confirmed fifth-round QB Sam Howell will start Week 18 and he is “really intrigued” by the quarterback.

“Our plan is we’re going to start Sam,” Rivera said, via Ethan Cadeaux of NBC Sports. “We feel that this is an opportunity for us for Sam to show us what he’s capable of… We’re really intrigued in watching and seeing what Sam can do as a quarterback in this league.”

Howell mentioned that he is excited about his opportunity and has been waiting on his chance to start.

“I was excited,” Howell said. “I’ve been working hard all year and I was kind of waiting for an opportunity to go out there.”

“I’ve seen some good things out of him this year … he made some throws where the ball comes off his arm and you’re just like ‘wow, that’s a nice ball,’” McLaurin said. “He has really good touch. And, I think he has a quiet confidence about him, so I’m really excited to see [what] he’s like in a game-like atmosphere.”

Giants DL Leonard Williams has played through pain this season and notes that the fact that the team has made the playoffs makes it all worth it.

“The winning makes it better, for sure,” Williams said, via GiantsWire.com. “It’s all been worth it. The pain has been — I’ve been dealing with it (the pain) and playing. It’s paid off the fact that we have a playoff spot. It’s worth it. I’m really willing to do whatever is best for the team at this point, which I’ve been doing all year. Whatever is going to get our team to the best position — at the end of the day our goal, every team’s goal at the beginning of the season is to get a championship. That’s our goal at the end of the day. Whatever is going to be the best for us to get to that point, I’m going to do it.” 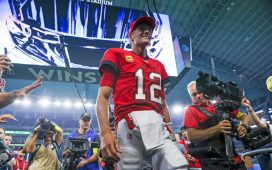