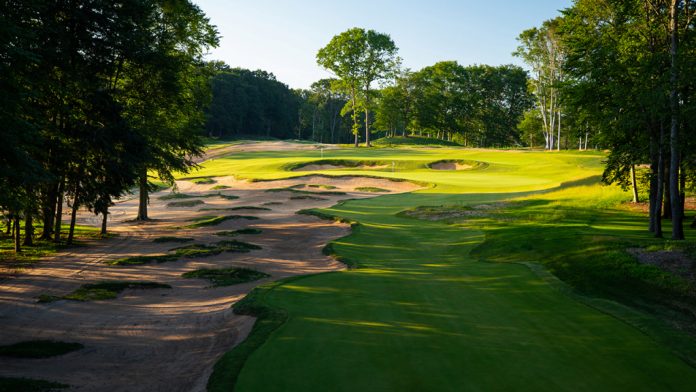 Ever had to bend an approach shot around a giant American flag? You might if you’re lucky enough to play the soon-to-open, Jack Nicklaus-designed American Dunes in western Michigan.

“We have the most unapologetic, massive American flag that sits in the middle of the conjoining fairways on nine and 10,” said U.S. Air Force Reserves Lieutenant Colonel Dan Rooney, who still flies F-16 fighter planes and who is the driving force behind American Dunes. “And there’s a local rule: It’s an unmovable obstruction. If you’re behind it, what a great story to tell.”

There will be many similar stories at the new course. Built to drive its profits to the Folds of Honor, a non-profit organization that provides academic scholarships to the children of wounded or killed soldiers, American Dunes promises to loudly and proudly salute those who have sacrificed while in military service. 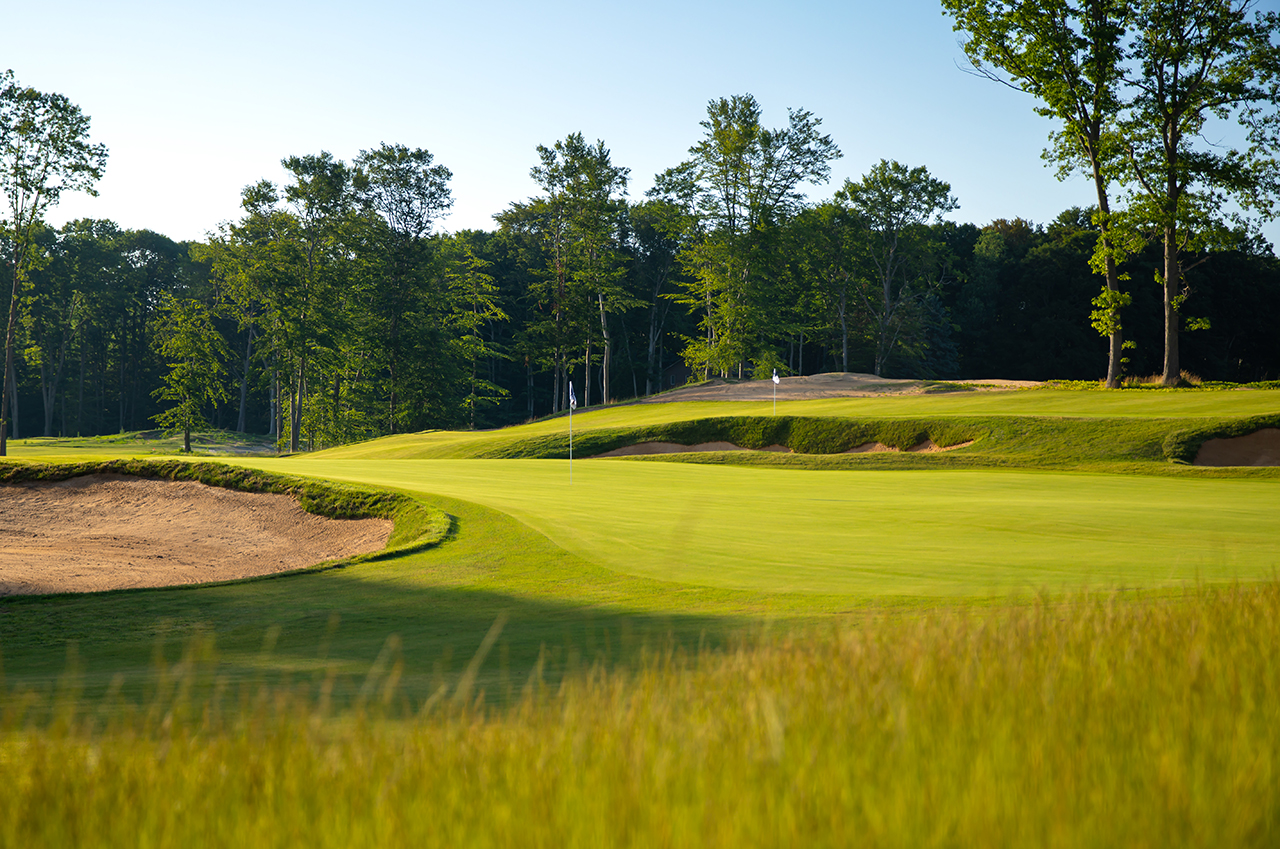 American Dunes opens May 2, and all profits from the course will be donated to Folds of Honor, which Rooney created in 2007 after sitting on a tarmac at the end of a commercial flight that also brought home the remains of a fallen soldier. The pilots of the flight asked that passengers remain seated while the casket containing the soldier was unloaded from the plane, but many passengers stood and began deboarding. Rooney wanted to find a better way to honor the sacrifice of that soldier and all those like him.

Folds of Honor was born, and in 2019 it awarded approximately $22 million in educational scholarships to more than 4,500 students, representing a 10 percent increase in scholarships from 2018. American Dunes in an extension of that mission, Rooney said, and the patriotic theme will be everywhere. Players must walk through what Rooney called a massive Folds of Honor memorial on the way into the clubhouse. The boot imprints of fallen soldiers will line the walkway through 8-foot walls, on which hang the stories of those soldiers and their families as well as the origin story of Folds. A bell will toll 13 times at 1 p.m. each day to signify the 13 folds in the American Flag when it is handed to a fallen soldier’s family, and the National Anthem will play daily.

“I’m telling you, people will walk into the golf shop with tears in their eyes. You will know immediately why this place is here,” Rooney said of the entrance. “If you were talking to a normal person about any other golf course, they would want to tell you all about the course. But the golf is just one character, certainly a main character but just one character in this story of American Dunes. It’s really not the only thing that sets it apart, because there’s a lot of great golf in the world.

“Nobody will be disappointed when they come play this course. … But what they’re going to tell their friends about is not simply the golf story. It’s the experience we created at American Dunes that is unlike anything else in the world. I always go back to the term reverent, and it’s so reverent.” 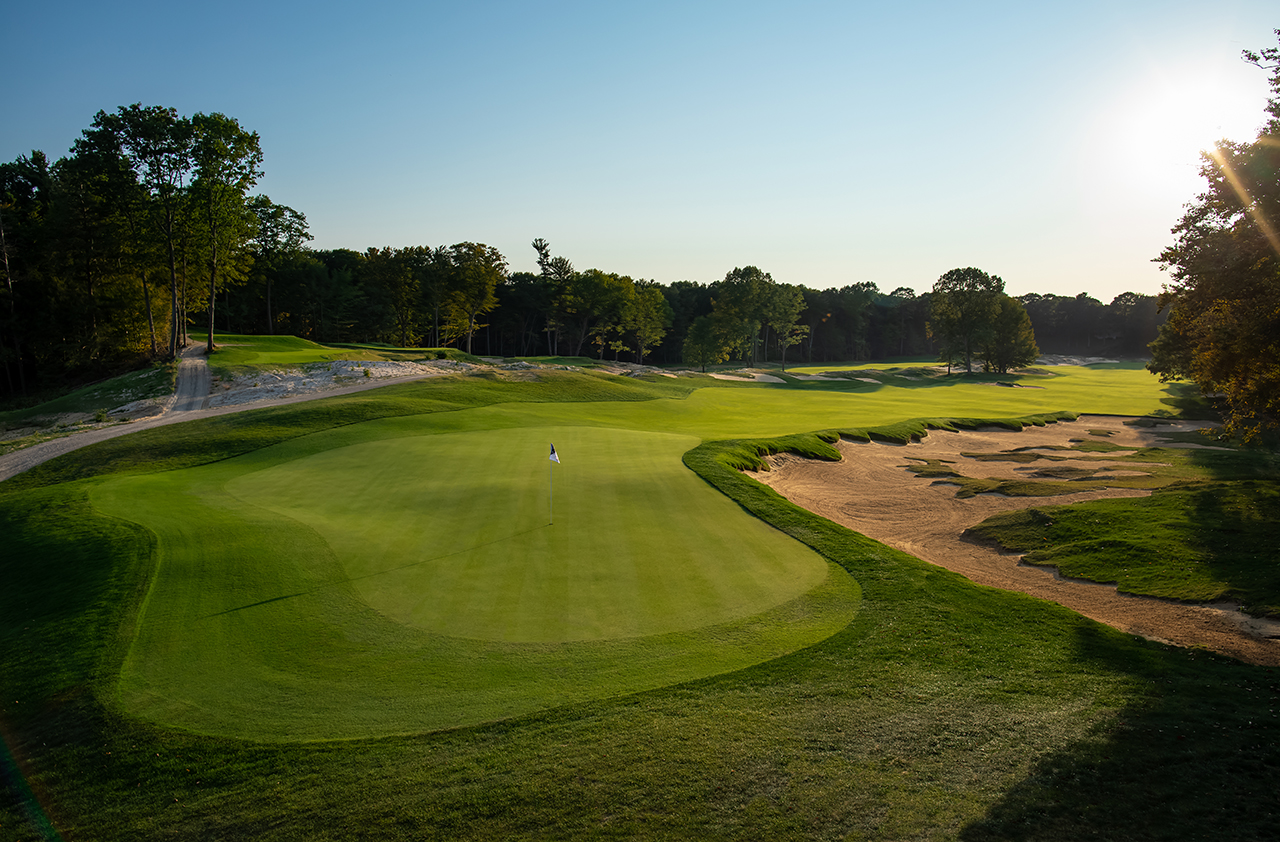 The course sits on the site of the former Grand Haven Golf Club, which was built in 1965 and which Rooney’s family owned for 20 years. Rooney partnered with four other investors to establish American Dunes LLC in renovating the layout, and little looks the same after Nicklaus agreed to wave was Rooney said was his typical $3-million design fee and totally rethought what was a heavily wooded course just a few hundred yards from the shore of Lake Michigan.

Rooney called the new layout much more “natural and organic,” with long views across the rolling property’s nearly 100 feet of elevation changes in what is now a much bouncier, sandier environment.

“The site was there, but it was totally treed,” Rooney said. “And it was on sand, but there was not a bit of sand you could see anywhere. That was the brilliance of Jack coming in and saying we’re going to take out every piece of turf, take out every piece of topsoil, take down 100 acres of trees, and we’re going to turn this thing into American Dunes. In Jack fashion, man, it’s hard. The slope from the back is like 151. So it’s all the golf you would ever want. … 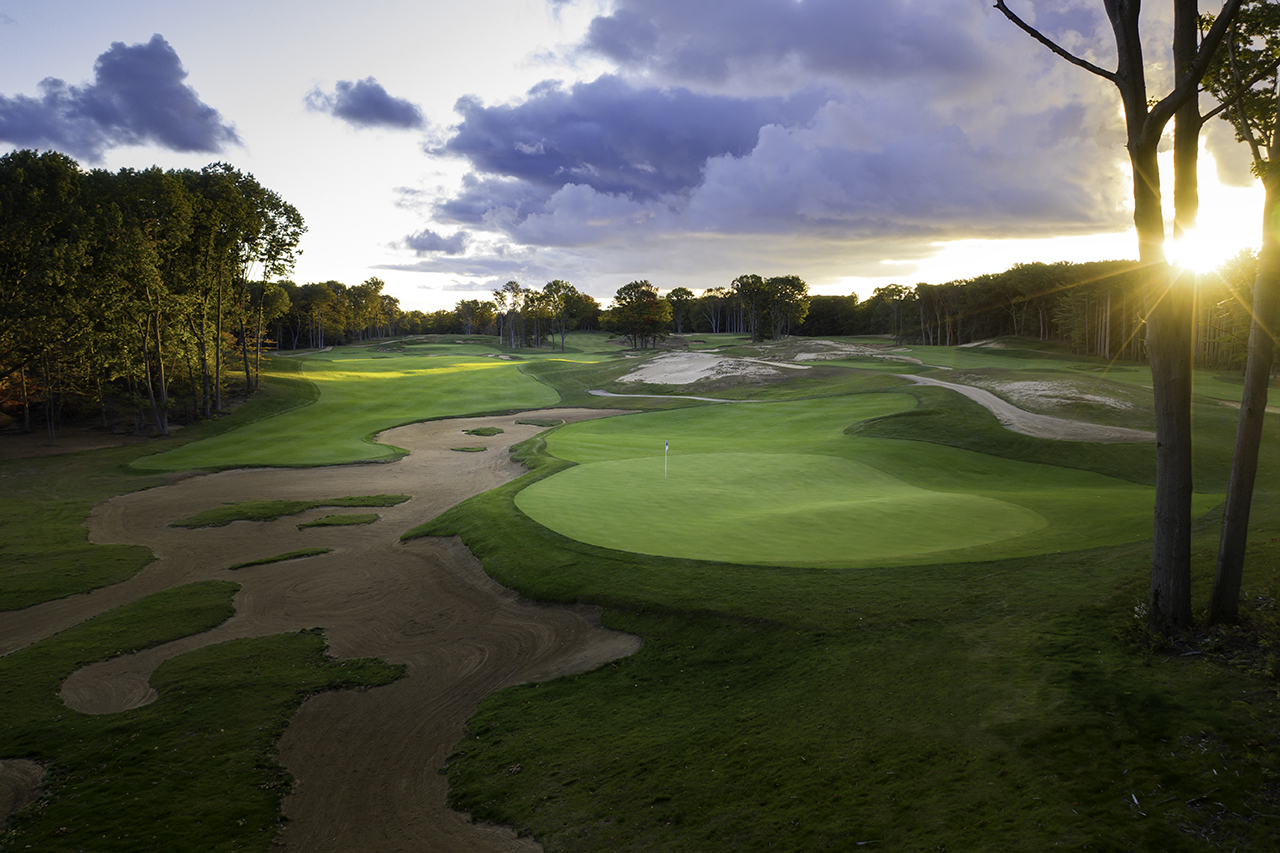 “When Jack came up to see the site, they drove around the golf course on a beautiful afternoon in May, and when we finished he said ‘Dan, you have no idea what you have here.’ Then we started the process, and it went from ‘Hey, I’m going to do a nice little redesign’ to a complete reimagination. What drove that line of effort was that this golf course has the potential, and it has to be as good and as reverent as the cause. They literally stripped this dune environment.”

Rooney said Nicklaus made nine trips to the site, and Nicklaus’ wife, Barbara, told Rooney that the plans for the course were frequently found on the kitchen table as Jack plotted the design. 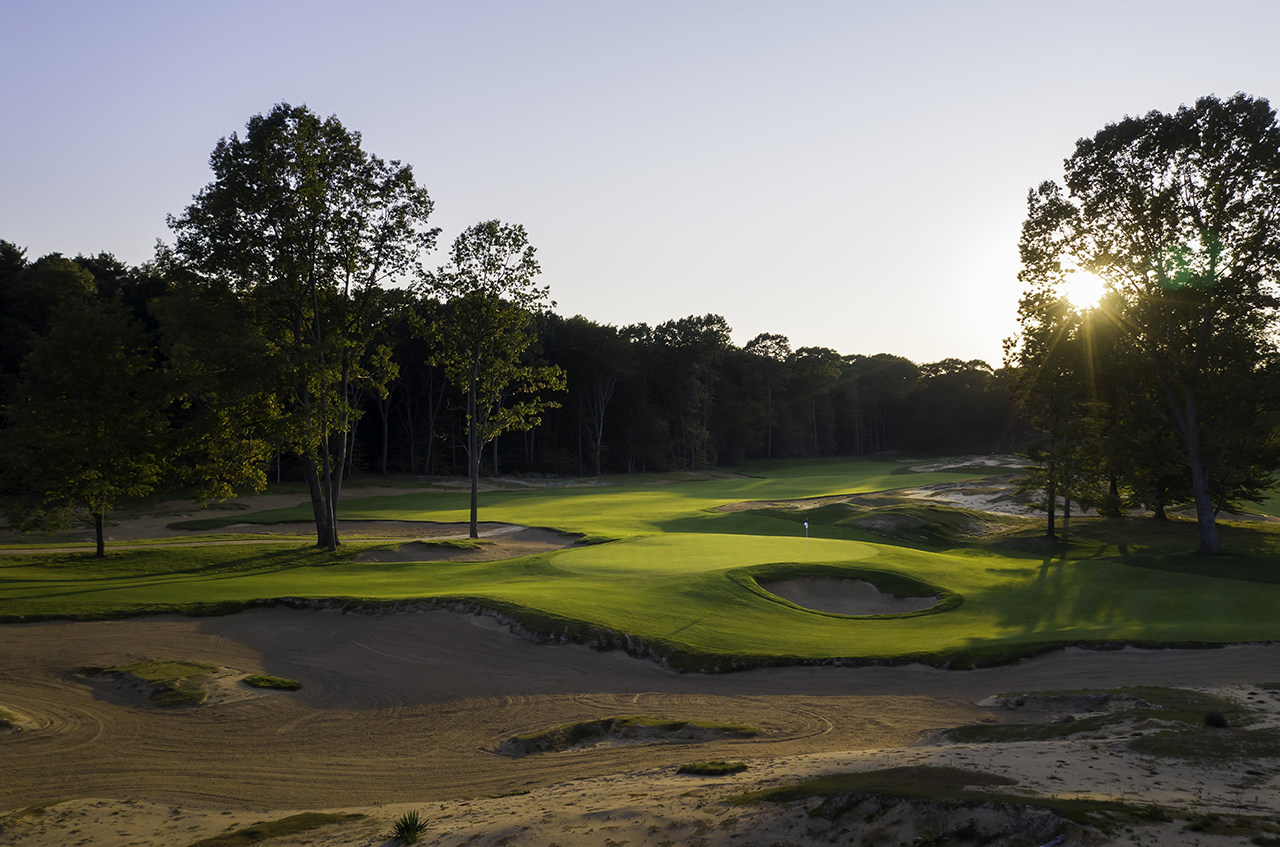 “I’ve never seen Jack do anything like this course,” said Rooney, who besides being a fighter pilot is also a PGA of America golf professional. “You could put tee markers anywhere and play it at any length. It’s kind of informal, if you know what I mean. It’s just so natural.”

The patriotic and military themes extends beyond the golf course and the memorial at the entrance to the clubhouse. The restaurant is set up like a fighter jocks’ squadron bar, with the beer taps built into a hollowed-out Aim-9 Sidewinder missile that normally would be hung under the wing of an F-16. Rooney called it the “ultimate Budweiser bar,” as the brand will be favored after Budweiser has donated more than $18 million to Folds of Honor over the past decade.

“The hang, if you want to call it that, at this place is just over the top. It’s just fun,” Rooney said, adding that the experience can go even further when a lodge named The Camp opens in 2022 with 16 rooms. 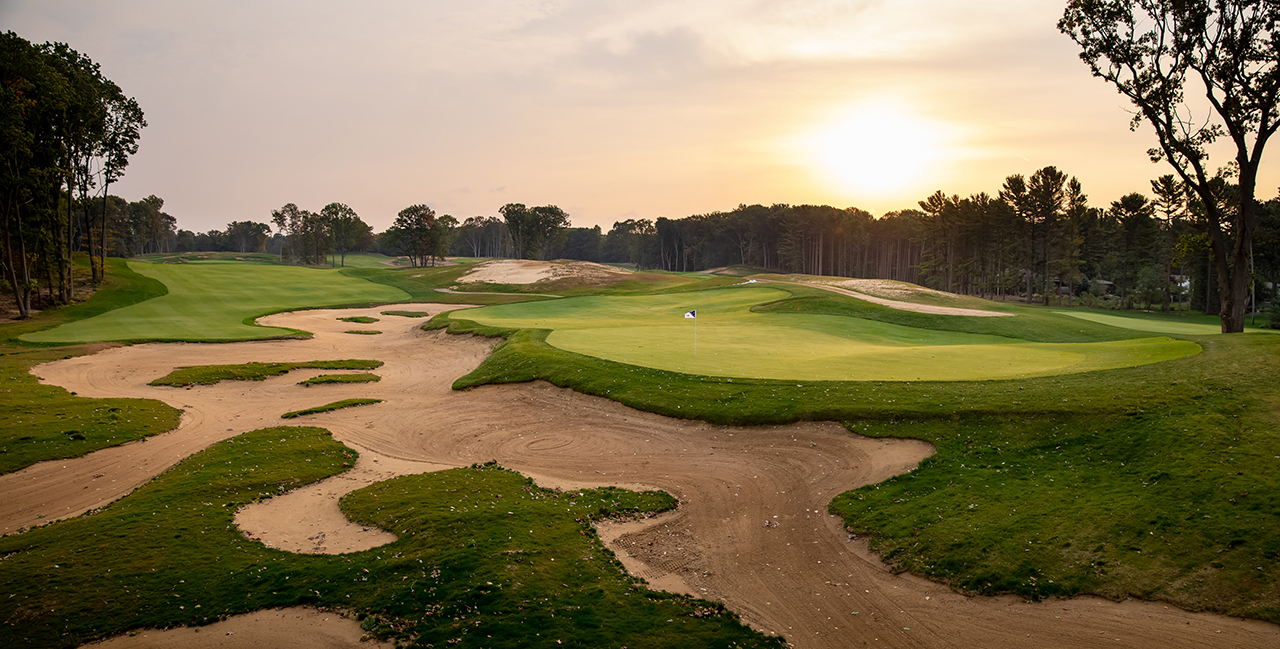 Many companies have donated course equipment or provided deep discounts to support Rooney’s mission, and others have donated to support construction. Rooney is a natural pitchman and fundraiser, and it’s easy to be swept up in his enthusiasm for the project, whether you be a golfer, a military supporter or both. With profits going to Folds, Rooney said it’s all worth it.

“This is a golf course where the objective, the unwavering objective, is to raise money and awareness for the Folds of Honor Foundation and support these families,” Rooney said. “That’s what truly sets this place apart.” 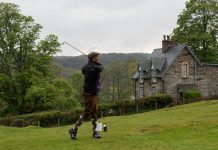 A Curious Golfer, a Lawn Mower and a Thousand Hours in Lockdown 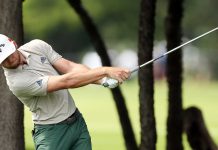 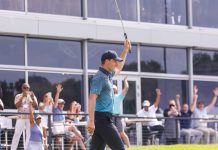 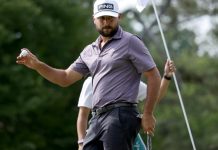 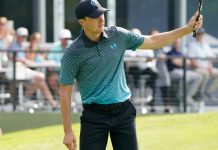 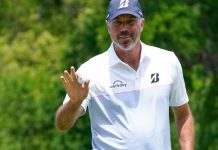 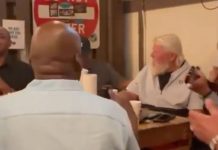 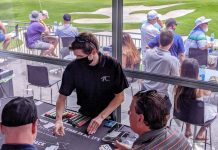 Want to play blackjack while watching the PGA Tour? You can at the new AT&T Byron Nelson venue. 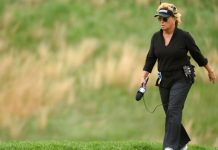 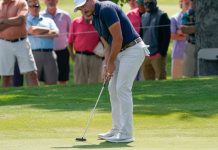 A day after Scott Stallings' caddie asked him if 'we could break 80,' he jumps near AT&T Byron Nelson lead 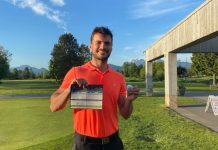 Watch: Golfer in Canada makes eagle for 59, celebrates by jumping in pond 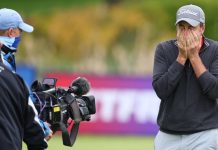