Nearly 20 years after the invasion of Iraq, an artist revisits the looting of the national museum in Baghdad


In an unassuming corner of downtown Vancouver, a portal to Baghdad awaits.

Installed recently at Vancouver’s Contemporary Art Gallery (CAG) and timed perfectly for George W. Bush’s recent Freudian slip about invasions, Abbas Akhavan’s cast for a folly (2019-22) evokes both the spirit of Iraq’s looted national museum and a whole new round of heritage destruction.

Inspired as was its first iteration in 2019—commissioned by the CCA Wattis Institute in San Francisco—by a photograph of the lobby of the Iraqi National Museum taken in 2003 by Corine Wegene, director of the Smithsonian Cultural Rescue Initiative, it now occupies a different time and space, in a nation that was officially not part of the invasion.

Now located at the epicentre of “Vancouverist” displacement, where old warehouse and artists’ lofts where the rent was cheap rent are being replaced by shiny new residential towers unaffordable to most citizens—and in the gallery named for the artist B.C. Binning, whose iconic mid-century house is being ransacked in its own way—the location unwittingly underscores the sense of “geo-trauma” that Akhavan says is at the centre of his work.

The work, with the famous basalt Assyrian lion, brick plinth and furniture made from scratch on site by Akhavan and assistants, is at once a theatrical set piece and a device for contemplation of cultural loss.

A subversive coda to the late Donald Rumsfeld’s infamous “stuff happens” comment, Akhavan’s work—by celebrating its materiality, a variety of organic ingredients including local mud and straw to recreate the lion in cob—makes stuff matter.

The exhibition title itself reveals its intention, which Akhavan says was to be “loyal to the source image rather than obedient.” “Cast” can refer to both theatre or sculpture and “folly” speaks to both the unfortunate rush to war in 2003 and the architectural term for a mock or replica building—often modelled after “exotic” temples, pyramids, or castles. The folly reached its zenith of popularity in Victorian England, a time when the diorama was also in vogue.

But if the piece is a replica, it’s a mischievous one, full of playful sleights of hand that avoid literalism in favour of transcendence, simultaneously evoking absence and presence. As one moves through the space there is a natural choreography from the framing device of the entrance way, through to the pile of bricks at the base of the lion. A piece of foam—a device used by looters to break valuable heads off of statues—stands in for what was once a wooden block, while a mirror replaces what was a painting, offering the viewer both agency as an actor in the set piece and a point of literal self-reflection.

Furniture made by local craftsmen to the side of the lion is deliberately covered in dust that could be ancient, war-borne or part of a construction zone.

At the back of the mise en scene, a scrim with printed images of the actual marble wall at the Baghdad museum creates an even greater sense of theatre, while a door once covered by deep green velvet curtains becomes a kind of green screen, appropriately evocative of Iraqi culture’s shift from the actual to the digital.

The portrait of Saddam Hussein—once ubiquitous in pre-invasion Iraq and openly displayed in the 2003 photograph—is now covered up by the digitally printed shark’s tooth scrim fabric, suggesting less a former dictator’s likeness than the death of a once-sovereign state.

Marble pillars are remade of drywall, their hollow innards revealed to break down the scale of Hussein-era monumentalism in favour of something much frailer and more human. Similarly a folding chair replaces a more grandiose one in the photo, and underneath it a bucket full of clay suggests the human impetus to rebuild in general and Iraq’s possible cultural reconstruction more specifically.

A tank full of lily pads beside the lion evokes both the American military term for creating multiple bases as well as hope for the future of a land more threatened by climate-change induced drought than foreign invasions.

While Iranian-born Akhavan spent his childhood haunted by the sound of Hussein’s missiles blowing up parts of his Tehran neighbourhood and his early student days protesting the invasion in Montreal, his interest in the subject has nothing to do with “biography”, he says.

Although the exhibition does not involve the local Iraqi community in the gallery’s public programming, cast for a folly is much more about the aesthetics of destruction than political specificity. As such, it powerfully invokes the tragedy of Iraq as well as more current theatres of war. 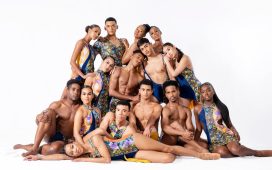 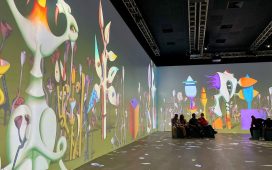 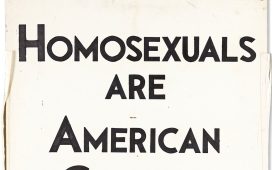 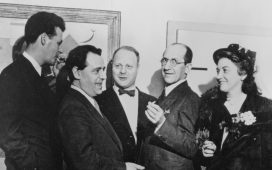