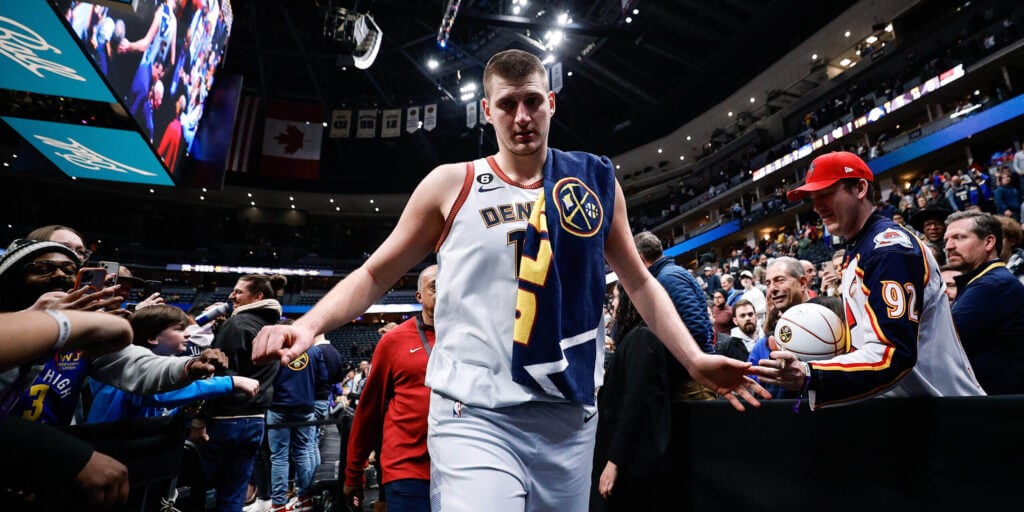 Happy holidays to all who celebrate! Whenever a year is on the verge of ending and a new one approaches, I tend to reflect on the year that was. Being 10 weeks in with the NBA Style Rankings, which began merely as an exploratory idea, means so much to me.

I want to sincerely thank everyone who reads, even if this isn’t necessarily your cup of tea — or eggnog. Hopefully, this serves as your sign to take a chance on something that brings you joy, just like the guys in this week’s rankings.

Turner is one of the most distinctive players I’m aware of in the league, and this is the latest example. He’s gone viral for the massive Lego structures he builds, but apparently, the Pacers host a “Star Wars” night every season that Turner clearly owns.

Last season, he was Darth Vader with a couple of stormtroopers. This season, he was the Mandalorian. And while this may not qualify as “fashion,” the details on all of the costumes shown are too good to pass up. Turner may have just given me something new to look for every week.

In back-to-back weeks of making the rankings, Monk continues to look more confident and more comfortable with the Kings. Something about the all-white meshing with his mint sweater reminds me of the winter. Rather than going with huge statement jewelry pieces, Monk chose to throw on a couple of diamond chains and was arena-ready.

Every so often, I’ll come across a fit that screams “simplicity is key.” This is one of those instances. Barrett went with a white jacket, white shirt and Amiri star pants. All of his jewelry, from his chain to his bracelets, is either platinum or silver.

New York has been riding a wave of success, and Barrett has been a key contributor. It appears as though he is feeling pretty good about the current situation, on and off the court.

Diallo has one of the most stylish New York Yankees jackets I’ve ever seen. It’s a collaboration between the Yankees and Supreme, and you can see varied patches scattered across the jacket that have meaning to the franchise.

The jacket is so eye-catching that all he added was a black T-shirt, the “6” chain representing his jersey number, a light pair of jeans and a pair of New Balances. I’m a fan of Supreme and obviously a fan of sports, so this fit was, without a doubt, making the list.

Banchero, a front-runner for NBA Rookie of the Year, is a Jordan Brand athlete, if you weren’t able to tell. The brown varsity jacket isn’t your average Jordan Brand jacket; it’s a collaboration with award-winning artist Travis Scott, who has consistently teamed up with Jordan to create shoes and clothes. Banchero’s red Jordan hoodie accentuates the red patches on the jacket.

His Louis Vuitton toiletry bag and backpack aren’t your average bags, either. Both are from Louis Vuitton’s collaboration with the NBA. The rookie is making waves on the court, but if he continues being this fly, he’ll make waves off it, too.

Mann is way too cool for school in this black-and-white photo. He’s wearing black leather pants, black shades and a checkered black-and-white sweater. Let’s not forget the shoes, either. This is a great look for someone playing in Los Angeles. Mann is making his first appearance in the rankings, and he’s a good representative for the Clippers.

Russell’s blue corduroy pants are one of my favorites from recent weeks, and he matched it with a bucket hat that’s nearly the exact same color. The hat’s material appears to be suede.

The dark denim on the jean jacket makes the blue in his pants and hat pop even more. Russell also has the white shirt to match the shoes and socks that he’s showing off by wearing hemmed pants. To see another effort to show off the pants, notice how his shirt is tucked in.

Kuzma is from Michigan, so I’m going to assume his body is better equipped for the cold than someone from California like me. As fresh as this patterned vest is, I also have to wonder what the temperature was that night. The vest has so many patterns that it can be easy to stare at — which may have been strategic for Kuzma.

Ready to set it off 🤙 pic.twitter.com/rJObHrOHu2

There are layers to how much of a flex Giddey’s fit is, and his face suggests that he knows. The green coat and green Off-White Air Force 1s are the most obvious flex, but did you notice that he’s casually holding two iPhones? What about the black Louis Vuitton toiletry bag? This is a well-played fit, and the two focal points look like they could’ve been made for each other.

As for Gilgeous-Alexander, he has the purple fleece, a bright-green Louis Vuitton belt, light jeans and shoes with fleece. Both of these guys have become regulars, and it seems every player on the Thunder is competing to be best-dressed.

The two-time NBA MVP has developed a pattern of wearing suits into the arena before games. When recently asked about this pattern, he said, “I started doing (it) this season. I think it’s one way to represent myself, and I just don’t like how the guys are dressing for the games. I think wearing a suit means business, and I’m here to do my job.”

Jokić is rocking the double-breasted plaid suit with hits of brown and blue with a gray turtleneck under. He has a watch with a gold face, which is a nice touch with the brown in the suit and the shiny brown loafers. He was the flyest guy in the arena that night, and he knew it.