Mystic Guide ‘In A Holding Pattern’ After Recent Setback

Last year’s Dubai World Cup winner Mystic Guide had been aimed at a winter comeback, but trainer Michael Stidham told bloodhorse.com this week that the 5-year-old son of Ghostzapper didn’t exit his latest work as well as he’d hoped.

“We weren’t completely happy the way he came out of it. So we decided to send him up to Kentucky to Rood & Riddle, where Dr. (Larry) Bramlage did the surgery and is overseeing his comeback,” Stidham told bloodhorse.com. “Nothing serious, but enough to where we are in a holding pattern, where we had to slow down again and give him a little more time before he resumes his training.”

Mystic Guide has not raced since finishing second in the G2 Suburban Stakes on July 3, 2021, after which he underwent surgery to remove a knee chip. He managed to record a pair of workouts at the Fair Grounds in December, but now the horse’s future is uncertain after the latest setback, which does not involve the knee on which surgery was performed. Mystic Guide will be in Kentucky with Godolphin trainer Johnny Burke for at least the next three weeks.

The lightly-raced Godolphin homebred has a record of four wins from nine starts, with earnings of $7,593,200.

‘A Wrecking Ball … To Integrity’: Lawyers For Baffert, NYRA Trade Barbs On Day One Of Exclusion Hearing

Annual KEEP Day In Frankfort To Be Held January 27

Woodbine’s Five Furlongs With Katerina Vassilieva: The Truth Is Out There 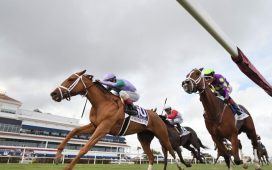 Broodmare Of The Year Leslie’s Lady Dies At Age 26