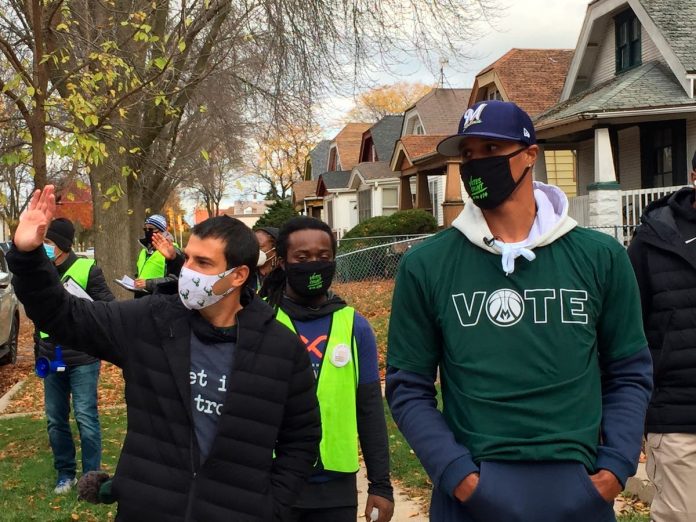 Democrat Alex Lasry, a 33-year-old Milwaukee Bucks executive and son of a billionaire, announced Wednesday that he’s running for the U.S. Senate in 2022 for the seat held by Republican Ron Johnson

The race is expected to be one of the most hotly contested in the country with control of the Senate hanging in the balance. Johnson, who rose out of the tea party movement, is one of former President Donald Trump’s most ardent supporters representing a state that President Joe Biden won by fewer than 21,000 votes.

Lasry, in an interview, said he was running because Johnson was “peddling lies and conspiracies” and didn’t represent the people of Wisconsin.

“He’s been in Washington not trying to get something done but trying to make sure things don’t happen,” Lasry said. “The reason I’m getting in is we need a change.”

Johnson has not said yet whether he will run next year and his spokesman did not immediately return a message seeking comment.

Johnson, 65, in 2016 pledged not to seek a third term, but backed off three years later, saying he wanted to see how the 2020 election turned out. He also has said he’s considering running for governor in 2022.

Johnson voted against convicting Trump in both of his impeachment trials and this week made the rounds on conservative talk radio saying he did not consider the U.S. Capitol riot last month to be an armed insurrection.

Lasry joins Outagamie County Executive Tom Nelson, also a Democrat, as the only two announced candidates in the race.

Lasry launched his campaign with a YouTube video that included endorsements from several prominent Milwaukee politicians, including Milwaukee County Executive David Crowley and Milwaukee Common Council President Cavalier Johnson. Lasry, who has never run for public office, touted his participation in racial justice protests, his support for unions and paying a living wage, and his work as host committee chair to bring the 2020 Democratic National Convention to Milwaukee.

Nelson, a former state lawmaker and candidate for Congress in 2016, said in a Twitter message that he welcomed Lasry to the race “as we all stand united to beat Ron Johnson.”

But Nelson also challenged Lasry — son of billionaire hedge fund manager and Democratic bundler Marc Lasry — not to spend any of his family’s money on the race.

“I’m not going to be self funding this race,” Lasry said. “I’m planning on investing, but more importantly what I’m planning to do is bring a lot of people into this campaign.”

Lasry made headlines last month when he received the COVID-19 vaccine, even though he’s not yet eligible in Wisconsin, after his wife’s uncle who is a rabbi at a senior living center in Milwaukee said there was one available there.

Even though she’s yet to announce, Godlewski has been working behind the scenes to shore up support and fundraising.

This story has been corrected by removing a reference to Alex Lasry being a hedge fund manager.