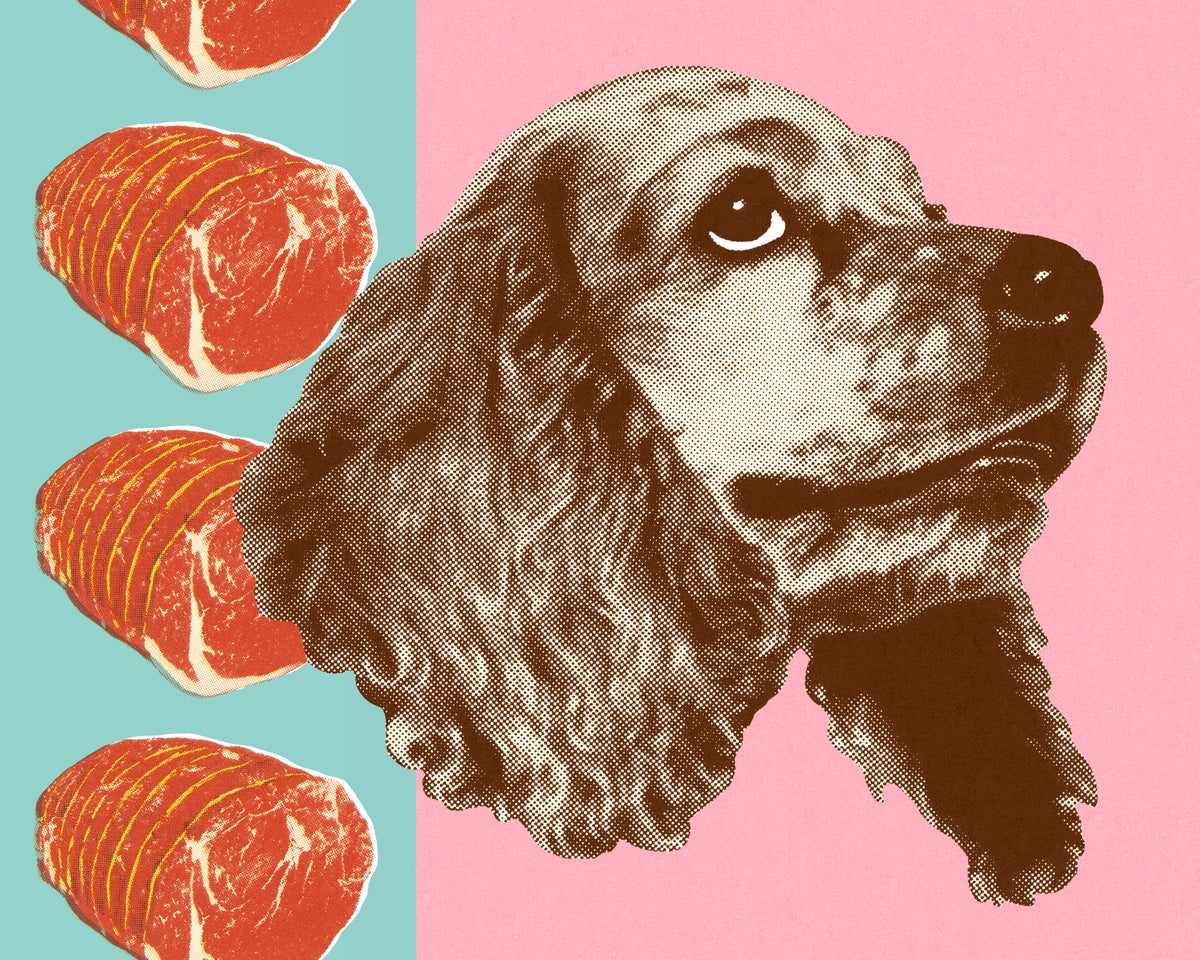 It started with an oven-baked snack. Flicking through a newspaper earlier this summer, I saw a photo of a dog staring at its reflection in a puddle. Its name? Flapjack. Shortly after, my friend called to tell me about her recent engagement – her partner proposed by attaching a ring to a little pouch around the neck of her cat, Oat. Their other cat is called Prune. On holiday, doing the typical dog-lover thing and sharing pet pics with a fellow tourist, I was shown photographs of an adorable puppy named Fig. Then I saw a plea on social media from an animal shelter trying to find a home for an abandoned young dog. He was called Truffle. A pattern was emerging.

According to a 2022 database survey from pet store Rosewood Pet, Honey took the top spot for the most popular food-related pet name, with a mix of savoury and sweet names making up the rest of the top 10. Rolo was second, followed by Cookie, Pepper, Fudge, Oreo, Pickles, Pumpkin, Biscuit, and finally Peaches at number 10. A database of 17,000 names from Animal Friends Pet Insurance found that Honey and Cookie came out on top again – but the longer list (with 82 food-related names in total) showed pet owners getting a bit more adventurous.

Among the list, micro trends start to appear. Names such as Muffin, Toffee, Treacle, Jaffa, Waffle and Fudge indicate a preference for super-sweet foods, such as the affectionate Cupcake. But there was an abundance of savoury options too, perhaps based on people’s favourite snacks – like Nacho, Peanut, Noodles, Chilli, Spud, and Nugget. A few more classically British names like Crumpet, Custard and Crumble made the top 100, as did Wotsit. There were a few artisan choices like Mochi, Tofu, and Saffron. Soft drinks also made the grade, including Pepsi and Cola.

As with most trends, it has been spreading on social media too. On TikTok, I found posts featuring cute baby ducklings called Mushroom, Paella and Halloumi and half a dozen posts (with a total of 570,000 total views) suggesting cute and rare food names for dogs, cats or other pets (including Bean, Curry and Gravy).

A call-out on Twitter found even more pet owners embracing the trend. There was a hamster called Pancake, two Tacos, a cat called Malai (which translates as “cream” in owner Sidra’s native Urdu/Gujarati), as well as Sushi and Tahini (both cats). Dog trainer and sitter Sarah said she noticed many of her clients opting for foodie names too, as she did with her own pooch, Meatball.

Sofia is the proud owner of two black cats. “Gnocchi was given her name because I have an Italian background and I had always wanted to have pets with pasta names.” A week after she got Gnocchi, her mum came home with a surprise – a little tuxedo kitten she called Kimchi. “I think the name was picked because my mum likes Korean food and it seemed cute.”

Ben’s dachshund is called Frankie Furter. He explains: “When we went to choose him he was by far the longest puppy there. My wife absolutely adores hot dogs and insists we try one whenever we travel. So based on his appearance and her love of hot dogs it was the perfect choice of name.”

Tianna took inspiration from delicious Jamaican foods and ingredients when it came to naming her cats. “We’ve got Plantain,” she says, and when Plantain had kittens, she ran with the theme and named the babies Scotch Bonnet (after the hot chilli pepper), Bammy (bread made with cassava flour), Cho Cho (a fruit used as a vegetable in Jamaican cooking) and Sweet Potato.

Dr Stanley Coren, a professor at the University of British Columbia and author of numerous books and dozens of articles about dogs, also spotted the increase in food names, writing about it in an article for Psychology Today. So what motivates us to name our pets and what is the thinking behind these trends? According to Dr Coren, it comes down to the fact we see our pets as part of the family, and so we treat them a bit like babies or kids. “It is common to use personalised nicknames for family members, especially children, and this may include food names. For example, a child might be referred to as Cookie, Biscuit, or Honey. My own daughter has the nickname Pumpkin. A colleague of mine in Montreal refers to his daughter as Mon petit chou which translates to my little cabbage.”

Obviously, people can be more carefree and casual when it comes to naming pets, so while kids get “proper names” pets allow an outlet for the more informal “breezy, offhand labels or in-jokes”, he explains. In Coren’s research he has also seen that while a dog might be given a more formal assigned name (Dancer or Odin), the owners will still often revert to calling their pet by foodie nicknames.

Isabel Ludick, marketing director of Pet Keen, has also noticed the prevalence of foodie pet names these days but for her, it goes back decades. “My grandma used to name all her dogs after herbs and spices, Pepper, Cinnamon, or Basil, etc, but it has definitely become increasingly more popular as the modern food scene has become more interesting. My grandma would’ve probably never thought to name her pet Sushi or Tofu but in 2022, it’s all the rage.” Ludick has seen examples of a kitten called Boba (after the Taiwanese milk tea made with tapioca) and a chihuahua called Jellybean among the more unusual choices.

As for what drives it, she says it’s simple. “People enjoy trends, and it’s no different when it comes to naming pets after food.” It makes sense, both our pets and the food we eat are such integral parts of our lives and families, maybe it’s no wonder people are putting two things they love together.

If you are thinking of getting a pet please visit rspca.org.uk/findapet to find your own Prune or Potato