The mood in the Spanish capital around Kylian Mbappe’s touted transfer to Real Madrid changed quite abruptly over the last few days.

For months and months, sources around the club hierarchy had been confident that Mbappe was going to be moving to the Estadio Santiago Bernabeu this summer.

Madrid had been thwarted last summer when Paris Saint-Germain refused to countenance the idea of selling the France international, even after Madrid offered €180 million for a player with just 12 months left on his contract.

The message then around the Bernabeu was that Mbappe had been “kidnapped” and forced to stay in Paris against his will. That was more or less backed up by the player himself, who admitted in October that he had told PSG he wanted to leave for the Spanish giants.

Nothing that happened through the 2021-22 campaign dented that conviction in Madrid. Even the Champions League last-16 meeting between the two clubs worked out perfectly. Mbappe showed what a stunning individual talent he was but Madrid’s history and tradition (or, more accurately, the experience of Luka Modric, Karim Benzema and co) helped power Carlo Ancelotti’s team to a stunning “remontada” comeback at the Bernabeu. PSG’s angry reaction to losing that night, personified by president Nasser Al-Khelaifi confronting the referee in his dressing room after the game, also showed, from Madrid’s point of view, their club’s superior class.

Through that time, Mbappe kept saying he would make his decision at the end of the campaign. The word from Madrid remained constant — he was just being polite and could hardly say anything else. They had a firm agreement on personal terms from last summer, and had been told nothing to make them think this would not be honoured once his PSG contract ended on June 1.

Madrid’s players all expected Mbappe to be coming to join them, and sources close to the PSG dressing room told The Athletic the expectations were similar at the Parisian end. Whenever he was asked in public, Real Madrid president Florentino Perez would smile knowingly and say all would be revealed at the end of the season. During the celebrations that followed Madrid clinching the La Liga title on April 30, he was asked if fans were delighted Mbappe was coming. “I hadn’t realised that, maybe it’s true,” he replied with a twinkle in his eye.

That confidence seemed justified when Mbappe had a very public lunch in Madrid on May 9 with PSG’s big ex-Madrid contingent, consisting of Sergio Ramos, Keylor Navas and his close friend Achraf Hakimi. There was an awareness that Mbappe was also visiting Doha around this time, but that was seen as a last commercial obligation for his current employers, not a reason to be worried.

But, bit by bit, concern started to build. It was noted in the French capital that those trying to persuade Mbappe to stay in Paris even included the country’s president Emmanuel Macron. The Emir of Qatar was also getting personally involved so that “his” club kept the player perhaps most likely to dominate next winter’s World Cup in his country. 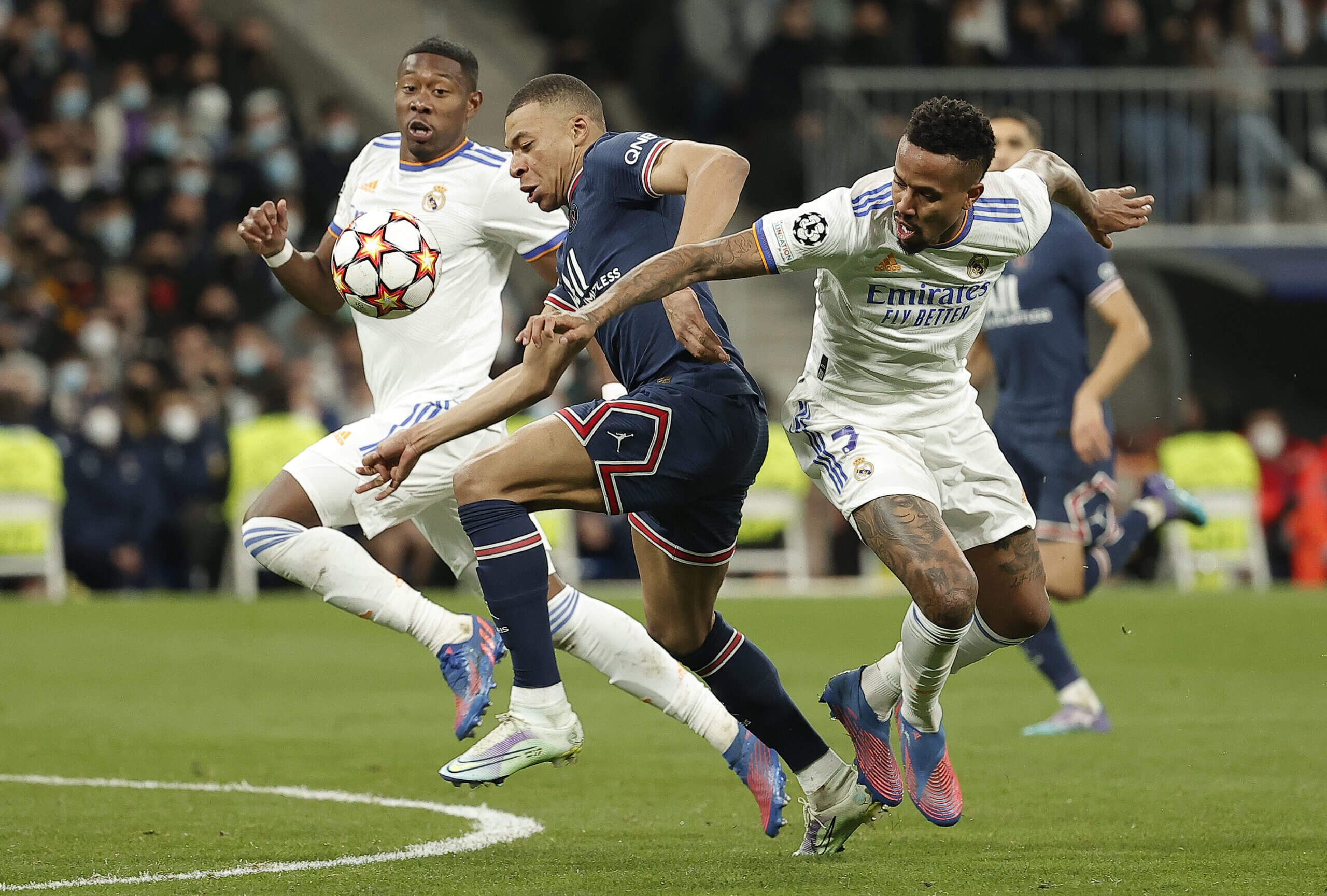 Mbappe scored as PSG lost at the Bernabeu in March (Photo: Getty Images)

As recently as the middle of last week, Madrid were confident that they had the word of the player, even if nothing had been signed, but by Friday, sources close to the Bernabeu hierarchy sounded increasingly uncertain. “Nobody knows what Mbappe is going to do,” one said.

That was just as confidence was growing in Paris that PSG had succeeded in persuading Mbappe to stay put. The feeling around the stadium during Friday evening’s final La Liga game, a goalless draw with Copa del Rey winners Real Betis, was that Madrid were no longer favourites for the player’s signature.

The agreement of a new three-year deal with PSG will come as a huge blow to Perez, who for almost three years now has based his club’s entire transfer policy on securing Mbappe. The Frenchman was long identified as the next “galactico”, and one that could attract legions of new fans and sponsors to the expensively renovated Bernabeu stadium for a decade to come.

Madrid’s interest in the forward is longstanding — they had also tried to sign him when he left Monaco for PSG in 2017, but the disappointment at missing out will be far greater this time around. Every decision made through recent seasons, from selling Martin Odegaard to not moving strongly for Erling Haaland, was based on preparing financially for a huge outlay on the one player Perez really wanted, and the man all Madridistas had been told repeatedly was sure to come.

Real Madrid have always accepted that they would never be able to compete with PSG’s Qatari owners if it came down purely to money. They did not even try to get involved in a bidding war. Instead, they stuck to what they said was an agreement already in place, although they did cede somewhat in allowing Mbappe to keep more of the “image rights” income they usually insist must be shared equally with the club.

Madrid based their play on sentiment, knowing Mbappe was a boyhood Blancos fan who had posters of Madrid-era Cristiano Ronaldo on his bedroom wall as a kid. As the doubts began to appear last week, that morphed into a suggestion that the 23-year-old had chosen lucre over love.

The decision also comes at a particularly awkward moment, with Madrid preparing for next weekend’s Champions League final against Liverpool in, of all places, Paris. There was already going to be an edge to that visit, given how the aborted Super League project led to a broken relationship with UEFA president Aleksander Ceferin, with whom Al-Khelaifi is so closely allied. Perez would have liked to arrive with everyone knowing he had won the Mbappe battle, but now they travel having lost out dramatically.

Madrid coach Ancelotti had been very careful not to get involved in the Mbappe sideshow. In his second spell at the club, the wily Italian is well aware that the president dictates transfer policy. So Ancelotti focused on the not inconsiderable challenge of leading the team to the La Liga title and Champions League final. Ancelotti and the players are unlikely to be distracted during their preparation for Saturday’s game against Liverpool at the Stade de France.

Win or lose that final, Madrid will have to make a statement in this summer’s transfer window. With the world’s other emerging superstar attacker Haaland already agreeing to join Manchester City, another big name will now be needed. It is not at all immediately clear who that might be, as Madrid have not been working on any Plan B. Harry Kane? Robert Lewandowski? Mohamed Salah? Raheem Sterling? Neymar? Cristiano Ronaldo?

It will be especially interesting to see how the Bernabeu hierarchy react to being so publicly rebuffed for a second time by Mbappe. Given he is just 23, there will be more opportunities to tempt him away from Paris. The composed character always gives the impression of being in full control of his own career and destiny and will likely be confident that he can still join Madrid at some later point, should he wish to do so.

That is now little consolation for Blancos fans, up to and including the president. Perez has been obsessed for years with signing the player he was sure was the perfect fit for Madrid. Losing out so publicly is sure to cause a type of pain that will not be quickly forgotten.