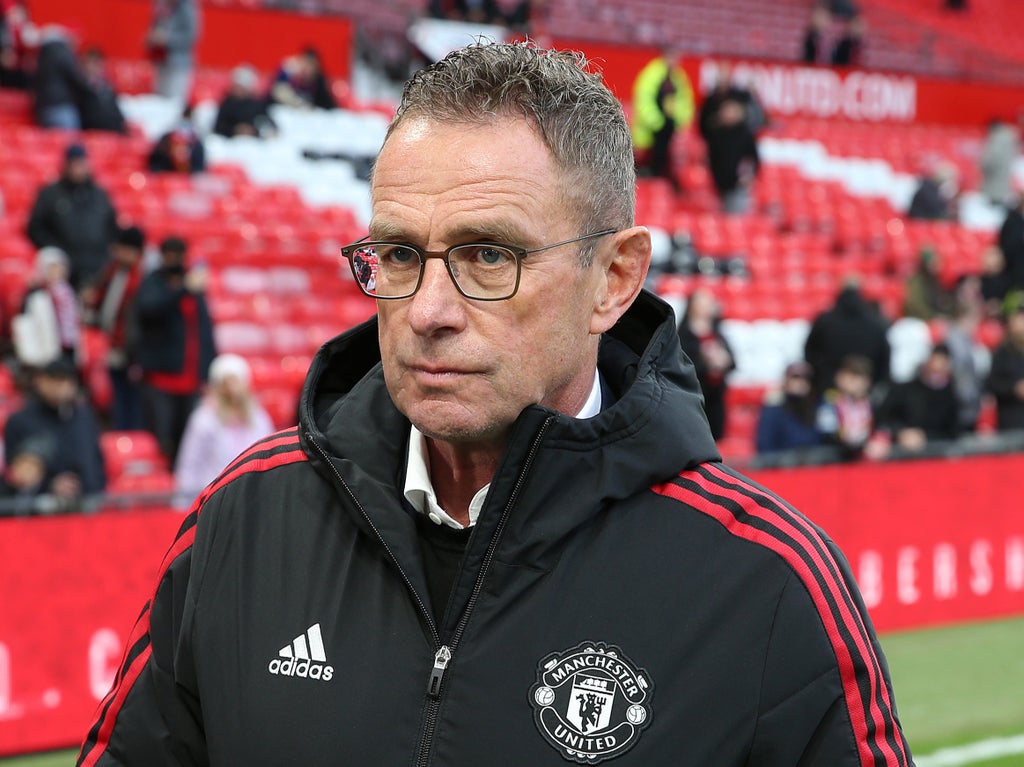 Michael Carrick, who departed as coach midweek following the win over Arsenal, hands over the Red Devils in a better situation than when Ole Gunnar Solskjaer left them, following his sacking.

A win will take United to within three points of West Ham in fourth, with David Moyes’ side shocking Chelsea at the London Stadium on Saturday.

Rangnick will now look to stamp his authority on this side and rebuild a top four case, while bringing enough organisation and confidence to become a threat to win a cup this season. Cristiano Ronaldo’s role under Rangnick will be interesting, with the German dismissing any suggestions that the Portuguese cannot adjust to his philosophy and claiming it should be the other way around: “We play in the most competitive league in the world so we need all the players on board. What I saw from Cristiano yesterday, he is more than willing to do that, to put his input into the team. His team-mates will have to do the same.”

Follow live score and goal updates, analysis and reaction in the first-look of United under Rangnick.

The players are ready and waiting in the tunnel at Old Trafford. Crystal Palace will be quietly confident that they can upset the Red Devils today. Manchester United will be hoping to get Ralf Rangnick’s tenure off to a winning start.

Raphinha’s 94th minute winner for Leeds on Tusday night wasn’t the first time Crystal Palace have conceded late on this season. They have conceded in the 90th minute of league fixtures three times already costing them a total of five points which will be a frustrating concern for Patrick Vieira.

The German has been brought in until the end of the season following Ole Gunnar Solskjaer’s sacking a fortnight ago.

Crystal Palace manager, Patrick Vieira, has been speaking to BBC MOTD and says he’s been impressed with his team’s recent performances even if results haven’t gone their way and singled out Christian Benteke as one of the players in good from. He said:

If Manchester United win today Ralf Rangnick will become the first German manager to win his first Premier League game in charge. United will also win consecutive matches in all competitions for the first time since Cristiano Ronaldo returned to the club.

Crystal Palace’s back-to-back Premier League defeats have come after a seven-game unbeaten run. The defeat at Leeds was their first away from home in the league in four matches.

Manchester United have conceded in 15 consecutive home games across all competitions in what is their worst run since 1959. Add to that the brilliant form of David De Gea and this is a major problem that Ralf Rangnick needs to fix.

If Crystal Palace win today, United would have lost seven home fixtures in a calendar year for the first time in 35 years.

Chelsea, Man City, Liverpool, all within two points; then it’s seven down to…well, West Ham for now but any of five by Monday night, and further changes will follow over Christmas.

Manchester United could finish the day as high as fifth place if they defeat Crystal Palace and Tottenham fail to win against Norwich. If both team are successful United will move ahead of Arsenal into sixth and Spurs will take fifth spot. United are currently six points behind West Ham who occupy fourth and they’ll want to close that gap as quickly as possible.

Crystal Palace (11th) are eyeing up a return to the top 10 and can get there with three points today. They may not end the day that high though as Brentford could overtake them with three points against Leeds and Aston Villa can move above them with a godd result versus Leicester in the late kick off.

Crystal Palace striker Christian Benteke has been speaking about life under Patrick Vieira, who took over as head coach during the summer, and says that this current Palace team is ‘one of the best I’ve played with’. Benteke told Premier League Produtcions: