Manchester United and Arsenal go into the last roll of the Europa League group stage dice seeking wins to ensure fast track entry to the last 16. United will avoid the play-offs if they emerge from their trip to Real Sociedad the winners by two goals or more. Cristiano Ronaldo and Marcus Rashford were among the scorers in United’s 3-0 win against Sheriff Tiraspol last week which left manager Erik ten Hag feeling upbeat.

“That’s a good signal, a good message, and we can build on that,” said the Dutchman whose rejuvenated side moved up to fifth in the Premier League with a 1-0 win over West Ham on Sunday, Rashford rejoicing in his 100th goal for the club.

“We need to go there and win by two goals to top the group so we’re going to try and do that,” said Rashford.

“It was our mission, our objective when we started the campaign, to top the group and that still stands.”

Premier League leaders Arsenal top their group and are on more solid ground than Ten Hag’s side, requiring a home win against Zurich or for PSV Eindhoven to stumble at Norwegian club Bodo/Glimt.

Mikel Arteta‘s table toppers dished out a five-goal thrashing to Nottingham Forest at the weekend, but the rout came at the cost of injury to winger Bukayo Saka.

Arteta is keen to seal the deal as group leaders on Thursday to avoid the post World Cup burden of a two-legged play-off in February.

“For sure it is important because we have never played this many games after the World Cup,” the manager said.

“Any games you can skip it’s a big bonus. We have discussed that. For two reasons. One because you skip two matches and also because you miss some of the top teams.”

Only group winners gain direct entry to the last 16. Runners-up face a knock-out round play-off against one of the eight teams, including Barcelona, parachuting into the competition from the Champions League.

Four sides — Real Betis, Union Saint-Gilloise, Freiburg and Ferencvaros — go into the concluding round of group matches for the continent’s second-tier competition assured of their seat at the last 16 table.

Nowhere are the stakes on Thursday higher than at Jose Mourinho’s Roma who under the Portuguese coach claimed the inaugural Europa Conference League title last season, the club’s first European honour.

But Mourinho needs to conjure up a home win from his Serie A outfit against Ludogorets to reach the play-offs as Group C runners-up.

Otherwise it’s back to the Conference League for the only manager to have enjoyed success in all current UEFA competitions.

They came away defeated 2-1 by Thursday’s opponents in the away fixture in Bulgaria and Roma forward Stephan El Shaarawy is only too aware of the task ahead.

“To pass the round, we still have to beat Ludogorets,” said the Italy international.

“It’s a one-on-one battle for second place. We will do our best in Rome,” ventured Ludogorets’ coach Ante Simundza.

Elsewhere surprise early season Bundesliga leaders Union Berlin kept alive their hopes of a place in the knockout round thanks to a 1-0 win over Braga last week.

That left them chasing a play-off berth as runners-up if they beat Union St-Gilloise or Braga fall to Malmo. 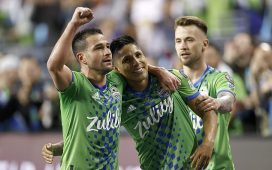