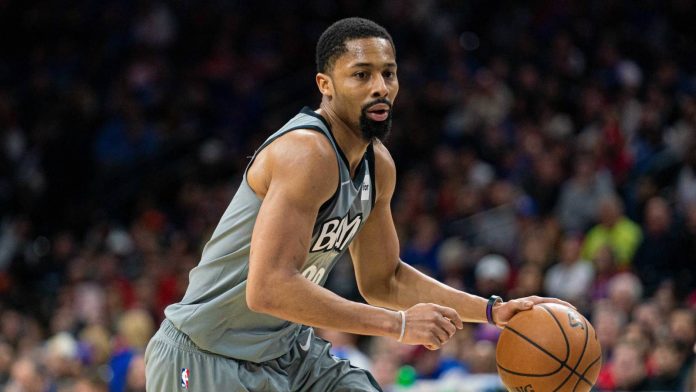 The Brooklyn Nets could look to make a splash on the trade market this summer after Kyrie Irving expressed concern over the team’s current roster, and Spencer Dinwiddie is a player that has apparently already drawn interest.

The Orlando Magic and Detroit Pistons had interest in exploring potential trades for Dinwiddie prior to the deadline earlier this month, SNY’s Ian Begley reports. If the Nets decide to engage the Magic in discussions this summer, Aaron Gordon may be a player that intrigues them. Executives around the league believe a player like Gordon could help Brooklyn, but sources told Begley that other teams — including the Indiana Pacers — have also shown interest in the Magic star.

After they signed Irving and Kevin Durant last summer, the Nets will not have enough salary cap space to add a max free agent this upcoming offseason. Dinwiddie will make just $11 million next season and has a $12 million player option for 2021-22, and he is averaging a career-high 20.8 points per game this season. With Irving out for the season after undergoing shoulder surgery, Dinwiddie could boost his trade value even further down the stretch.

Gordon is averaging 14.5 points and 7.5 rebounds per game in his sixth NBA season. He’ll earn a base salary of around $18 million next season and $16 million the year after, so his contract is also fairly team-friendly relative to his production.

Irving had no problem expressing his displeasure with Brooklyn’s current roster earlier this season, and management will likely do everything possible to keep him and Durant happy. If that means trading Dinwiddie and improving their roster elsewhere, it would not be surprising to see that happen.