In front of a record crowd of 43,255 for a women’s domestic game in France, Hegerberg headed the visiting team ahead. Marie-Antoinette Katoto’s second half leveller drew PSG to within a goal of Lyon over two legs and set up a tense final half-hour but Renard rose highest to head home to crush hopes of a fightback.

On a night when Barcelona suffered a shock 2-0 defeat to Wolfsburg, their first loss in 45 games, to progress to the final on 21 May with a 5-3 aggregate win, 500 miles to the west Lyon were trying to make a statement.

There has been much talk of the new Spanish queens of Europe, and it has not gone unnoticed in France.

“There was women’s football before Barcelona, and it was played here for years,” Hegerberg had told L’Equipe wryly earlier this month. “We have to win again to regain our place in world football.”

Having come from behind to earn a 3-2 home win last weekend, the seven-time European champions were decidedly unfazed by the show being put on for them by the Paris ultras who, with tifos, flares and drummers, bounced constantly behind the goal their team was attacking in the first half.

Yes, Lyon faded last season, failing to reach the Champions League final for only the third time in 10 years after winning the prestigious cup competition for five seasons in a row. However, they were a team in transition, with a high player turnover and the absence of Hegerberg for much of the season, due to an ACL injury, hampering their campaigns domestically as well as halting their march on the continent.

It was fitting then that after a somewhat scrappy opening period it would be Hegerberg that would extend the visiting team’s lead in the tie to two, rising above Sakina Karchaoui to send a header looping over goalkeeper Barbora Votikova and into the corner. The Norwegian striker wheeled away, cupping her ear towards the Paris faithful but also, no doubt, to the Catalans.

PSG’s fanbase may have mobilised, but chaos in the dressing room has impacted the team’s season and both legs of the Champions League semi-final. Midfielder Kheira Hamraoui was in the headlines ahead of the first leg two weeks ago for an altercation with teammate Sandy Baltimore in training.

As a result, the French midfielder was absent for the first leg, with 18-year-old Laurina Fazer performing well in her place and not included in the squad for the return fixture.

“The gap between the teams wasn’t big,” said PSG manager Didier Ollé Nicolle. “We have some young players, like Laurina Fazer, or Charlotte Voll, who came off the bench. We have some 20 players; Lyon have four or five more players, more experienced players. That’s why I’m proud of what we did.”

With Fazer struggling this time and PSG looking to close a two-goal gap, she was swapped at half-time for the more experienced legs of former Chelsea forward Ramona Bachmann.

There was more intensity to PSG in the second half, Sära Dabritz forced a fine save from former PSG keeper Christiane Endler just before the hour mark. She would pull off a smart double save from Kadidiatou Diani and Baltimore shortly after but could not stop Katato from hammering in the rebound.

The threat of the home team continued to grow but the battling nature of the game left both sides vulnerable to conceding set pieces. In the 83rd minute Selma Bacha’s free-kick from the right was swung towards towering Lyon centre-back Renard and the captain sent her header confidently past substitute keeper Voll, on at half-time in place of injured Votikova, to seal victory.

Sonia Bompastor, the Lyon coach, said: “Over the two games, we deserved it. We managed to score five goals against a Paris team that has a lot of individual and collective quality. We used our experience well.

“We had three objectives at the start of the season; we missed out on the Coupe de France and we’re still in the hunt for the other two, but we still haven’t won anything. We’re going to have a very good Barcelona team against us in the Champions League final. We’re in a good position but we still have work to do.

“Barcelona totally dominated Wolfsburg in the first leg [of their semi-final], but I saw in the second leg they lost 2-0. We managed to beat them 3-2 in pre-season. They’re a very strong team, we respect them. But with the talent of our players, I think that in a one-off game, we can go and get that trophy.” 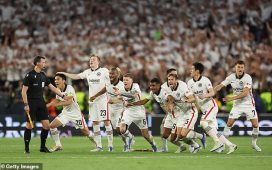 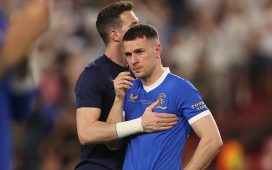 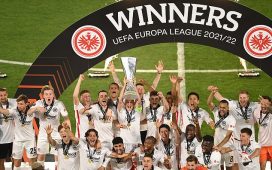 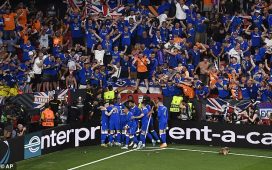 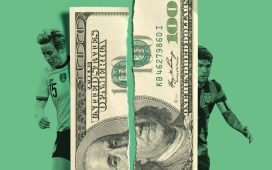 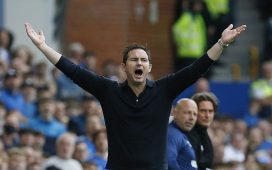