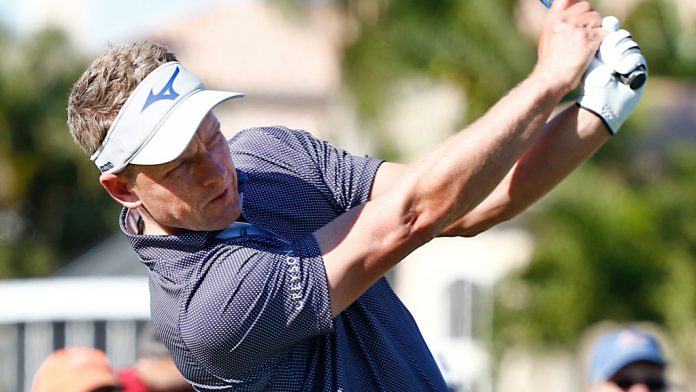 There is little professional golf being played, but Luke Donald is still working.

The English golf professional who lives in Jupiter, Florida, has been filling his time away from his day job with more golf, except this time, as an instructor.

While self isolating with his family during the coronavirus pandemic, Donald is spending his days with an activity that involves his three daughters and helps golf fans focus on something other than the news, even if it’s just for a few moments.

For nearly two weeks, Donald has been filming short golf lessons and posting them to his Instagram and Twitter and giving fellow golfers tips they can try while self isolating. His oldest daughter, Elle, has filmed a few of the videos and his youngest, Gigi, filmed <a href=”

Donald, 42, is filming at his home at The Bear’s Club in Jupiter while all the courses in his area have closed their doors.

“I know a lot of people are stuck at home, so if this gives them just 10 minutes a day of doing something and working on something that helps their games, that’s what I’m trying to do. I think people appreciate that,” Donald said to Golfweek.

For a golfer, there’s no better use of time inside than receiving free lessons from a pro who has 17 professional wins, including five on the PGA Tour.

Donald said he’s received many positive comments about the videos and people seem to be appreciative of the lessons during such an ominous and uncertain time.

“I’ve done some videos on my Instagram before and people have always enjoyed the instructional part. More so now than ever,” Donald said. “In a period like this, in times like these, I’m just trying to give a little bit back to the fans. Give them a little bit of knowledge, a little bit of a distraction from the times we are going through right now.”

The former World No. 1 said he’s focused on filming lessons and finding tips that are helpful for people who are self-isolating and spending much of their time inside. His lessons so far have included chipping, pitching correction and a series on putting fundamentals.

His videos have even challenged him, a Ryder Cup star, as he revisits some of the basics.

“I’m starting to have to wrack my brain to come up with tips that you can do inside but there’s lots still out there,” Donald said. “The golf game is very complicated. But I’m trying to make these reasonably simple, things that people can do inside where you don’t need special equipment and you can still learn and get better. Going to college at Northwestern, we were stuck inside four or five months a year, and sometimes that internal learning can really help you.”

Donald’s not alone in using his time off to help others with the game. Irish golfer Padraig Harrington has filmed several golf lessons found on his personal Instagram. #PaddysGolfTips range from hip and feet placement, head placement and advanced chipping.

When he began the series, Donald recorded a video asking followers to submit which parts of the game they would enjoy lessons and offered some encouragement.

“Obviously some tough times right now. Bizarre times. Times we haven’t experienced in our lives, but (I’m a) big believer the human spirit is at it’s best in tough times,” Donald said on his Instagram.

Steve DiMeglio contributed to this report. 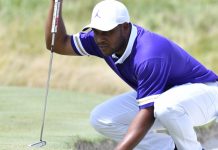