Lakers have won three straight, and Anthony Davis is ‘playing out of his mind’

LOS ANGELES — Things have rarely been easy for the Lakers this season.

They’ve played one of the league’s toughest schedules. They’ve already lost five straight games twice. They began the season with a historically poor 3-point shooting stretch. Anthony Davis and LeBron James are dealing with lingering injuries, and James on Sunday missed his fourth game in a row due to a left adductor strain. Russell Westbrook’s play and role have been dissected ad nauseam. Trade speculation hangs over the group. The Lakers are under immense scrutiny.

But Sunday night, Los Angeles pushed its issues to the side. Things were effortless.

The Lakers routed the San Antonio Spurs 123-92, their first near-wire-to-wire blowout win of the season, at Crypto.com Arena. The Lakers have won three straight games for the first time since a four-game win streak from Dec. 31 to Jan. 7 last season. At 5-10, they are slowly beginning to separate from the league’s bottom-dwellers.

“I mean, it’s great,” head coach Darvin Ham said. “I’d be lying to myself and everybody if I said it didn’t feel good.”

Seven Lakers scored in double figures, led by Davis, who finished with 30 points (on 12-of-19 shooting) and 18 rebounds. The Lakers were plus-34 in Davis’ 28 minutes, which seems like a typo.

Picking up right where he left off. pic.twitter.com/nmNaAVWD9z

Davis yet again carried the offensive load early, scoring a season-best 18 points in the first quarter.

“Just imposing my will on both sides of the ball, trying to be the dominant player that the team needs me to be,” Davis said. “It’ll usually lead to us winning basketball games or in the fight, so doing everything he’s asking of me, the team is asking of me and just trying to do my part, honestly.”

Davis, who said last week that his back is “fine,” is playing some of his best basketball as a Laker.

“AD, he has to be the focal point,” Ham said. “He has to spearhead the charge. That’s the way we’re built. He’s embraced it. When Bron gets back, if AD can sustain that level, we’re going to be as good as our preparation makes us.”

Though Davis has clearly stepped up, he’s had considerable help from the team’s supporting cast, who are thriving with a more egalitarian approach.

Austin Reaves scored a season-high 21 points, including a career-best 17 in the first half. Reaves reached double figures for the fourth straight game and the fifth time over the past six.

He’s arguably been the Lakers’ second-best player after Davis during the win streak, as he’s playing with more confidence and showing how dynamic he is as both a scorer and playmaker to go along with his trademark scrappy defense.

“He’s been doing it all,” Davis said. “All three levels. He’s in the paint with his shot fakes. Getting to the line. Shooting the 3-ball. Handling the ball in pick-and-rolls. Making the right reads. He’s been playing unbelievable for us. … He’s definitely taken a big step from last year to this year, and I think he’s going to be a hell of a player.”

Ham highlighted Reaves’ decisiveness and efficiency as the two biggest developments in his game over the past week-plus.

“Just getting to it,” Ham said. “Like, being more efficient. Not wasting dribbles. Not wasting time on the clock by just holding the ball. Once he puts it on the floor, he’s driving downhill more. When he’s open on the kickout, he’s catching and shooting and not thinking twice. … He’s been one of our best playmakers. And he just loves to hoop. You can see his passion shine through whenever he’s out there.”

Reaves has played well with the starting unit, serving as the de facto lead ballhandler. With Patrick Beverley continuing to struggle offensively, particularly as a shooter (he’s 24.3 percent on 3s), there is a growing case for Reaves’ importance with the starters.

When asked if he thinks Reaves has made a case to remain in the starting lineup once James is back, Ham said, “We’ll see.”

In addition to Reaves, Lonnie Walker IV, whom the Spurs drafted with the No. 18 pick in 2018, scored 14 points against his former team. Newly healthy Thomas Bryant (15 points) and Dennis Schröder (13) provided a “shot in the arm” with their energy and scoring, according to Ham.

The blowout allowed the Lakers to limit their starters’ minutes and establish a rhythm with their bench. For as explosive as their offense was, they held the Spurs to just 92 points and didn’t allow more than 28 points in a quarter. Their defensive numbers didn’t necessarily jump out, but they were disciplined, refrained from fouling often and controlled the interior with Spurs center Jakob Poeltl out.

The only negative was that the Lakers continue to battle the injury bug. Westbrook, who had 10 points and 10 assists, left the arena with a wrap on his right thumb. X-rays were negative, but he will be re-evaluated Monday.

“We’ll find out more in the morning when he gets evaluated again,” Ham said.

As Los Angeles generates momentum, it will embark on a three-game trip that kicks off a stretch in which 16 of its next 22 games are on the road between now and Jan. 2.

The Lakers’ first game of the trip is one of their toughest of the season: a matchup Tuesday with the Phoenix Suns, currently second in the West. It’s unclear if James, who was questionable until tipoff Sunday, will play in Phoenix.

The Lakers will have to adjust once James returns, as he changes the offense’s hierarchy. But Ham has made it apparent that he wants the offense to flow more through Davis than it did before James’ injury.

After Phoenix, the Lakers head east to San Antonio for a rare back-to-back against the Spurs after Thanksgiving. The Lakers and Spurs play three times in less than a week.

San Antonio has lost five straight games and 10 of 11 overall. The Spurs are a rebuilding team focusing on player development. They made the LeBron-less Lakers look like world-beaters.

Los Angeles has a precious opportunity to pad its record and climb closer to .500. Despite their three-game win streak, the Lakers are still 13th in the Western Conference and 2 1/2 games behind the Minnesota Timberwolves for the last spot in the Play-In Tournament.

Both Ham and Davis were hesitant to suggest that the win streak gives the team a chance to breathe.

“I think everybody’s confidence is very high, while not getting too high,” Davis said. “Going into Phoenix to start the trip will be a good test for us. It feels good to get three in a row. Now we just got to carry it over into the road and put some more wins together.” 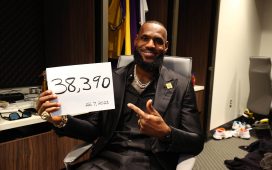 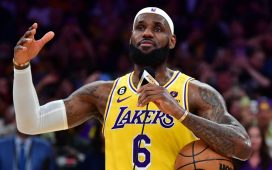 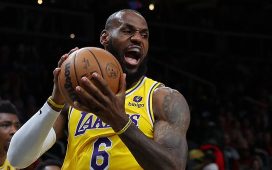