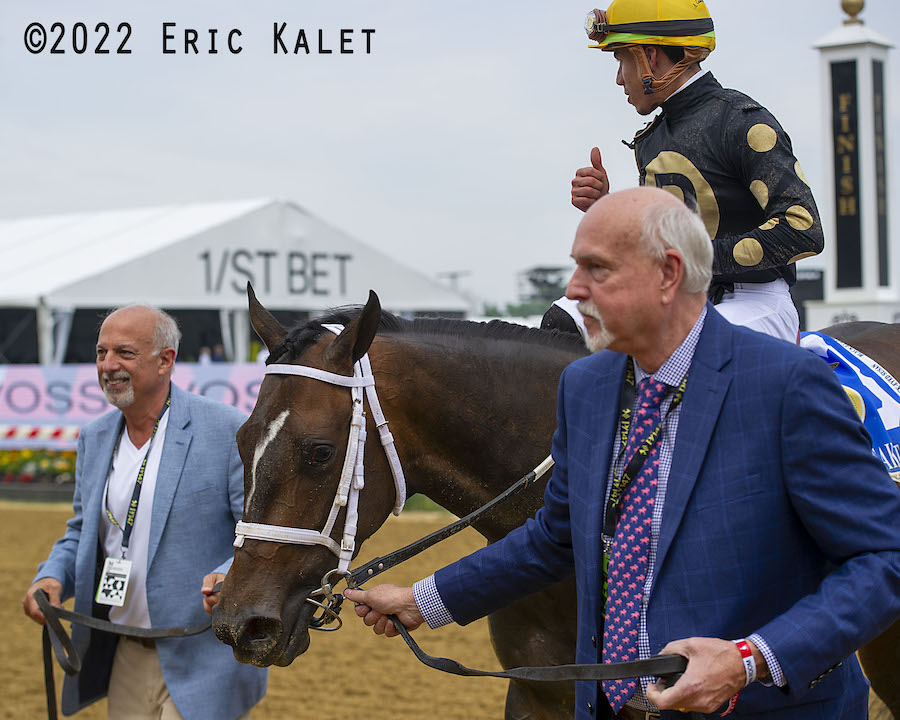 Lady Scarlet is led into the winner’s circle after her victory in the G3 Miss Preakness Stakes at Pimlico Race Course.

A horse claimed by the Mike Maker barn completed a career turnaround, and earned herself a breakthrough graded stakes victory.

Stop us if you’ve heard this one before.

This time around, it was Lady Scarlet, picked up through the claim box last November for $150,000, who earned her first graded score on Friday at Pimlico Race Course, unleashing a devastating turn of foot to take the Grade 3 Miss Preakness Stakes.

The daughter of Union Rags broke alertly in the six-furlong sprint for 3-year-old fillies, and settled on the inside path under jockey Irad Ortiz Jr., as post time favorite Happy Soul rushed out to the early lead, chased in second by Gimmick. The lead duo were well clear across the backstretch, going through an opening quarter in :23.01, allowing Ortiz to take Lady Scarlet off the rail and position her on the outside as they went through the turn.

Happy Soul and Gimmick continued to battle in the bend, and they drew even at the top of the stretch after a half-mile in :45.58 while Lady Scarlet loomed on the outside and entered the fold at the three-sixteenths pole. Under left-handed urging by Ortiz, Lady Scarlet carried that momentum past the early leaders, and drew off to cross the wire 3 3/4 lengths ahead of Happy Soul. Gimmick was another length behind in third.

Friday’s victory improved Lady Scarlet’s record to four wins in nine career starts for earnings of $303,530. It was her third win on the season, after taking a February optional claiming race at Oaklawn Park, and earning her first black type with a victory in the Cicada Stakes at Aqueduct in March. She entered the Miss Preakness off a fourth-place effort in the G3 Beaumont Stakes last month at Keeneland.

Lady Scarlet was bred in Kentucky by Popatop LLC, who initially campaigned the filly. She is out of the winning Include mare Exclude.