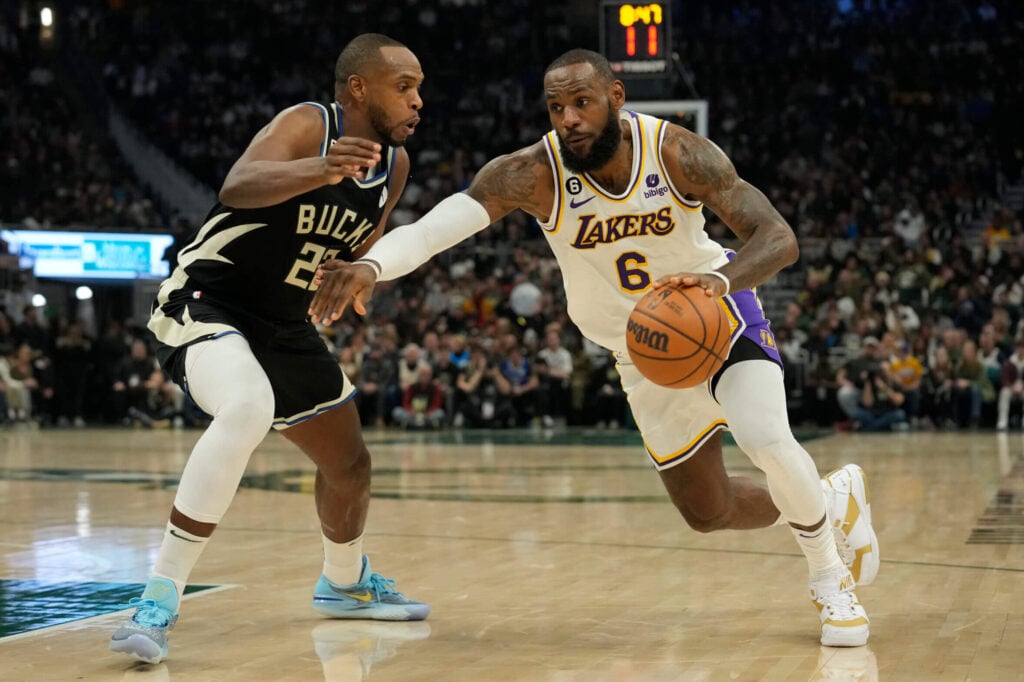 MILWAUKEE — On Friday night, Khris Middleton put on a Bucks jersey and played in an NBA game for the first time in 238 days. He started for the Bucks and hit his first shot. The three-time All-Star made two jump shots at the start of the fourth quarter and Bucks coach Mike Budenholzer managed minutes carefully enough to allow Middleton a chance to close the game.

“Just relying on my experience,” Middleton said of his season debut. “Being out before, coming back in the middle of the season, being out whatever, coming back, just not to rush, let the game come to me. Don’t try to do much your first game back and try to fit in and play off my teammates.”

Everything was set up for Middleton to make a big play and help the Bucks pull out a close win against the Los Angeles Lakers on national TV in his first game back in the 2022-23 season, but the Lakers ruined that storybook ending.

“Felt great,” Middleton said. “I guess I should say good, if we got the win, I’d feel great.”

Middleton put up 17 points, two rebounds and seven assists in 27 minutes. Jrue Holiday tallied 28 points, six rebounds and nine assists. And Giannis Antetokounmpo had a monster night with 40 points, seven rebounds and five assists. It was impressive, but the Bucks’ big three was outshined by the Lakers’ star trio, who helped the Lakers pull out a 133-129 win.

The Lakers scored easily from the start of the game and put up four consecutive 30-point quarters in a defensive performance from the Bucks that was nowhere near the standards of coach Mike Budenholzer.

Or the standards of Antetokounmpo.

“Wasn’t able to get stops. It was too easy,” Antetokounmpo said. “Too easy, too easy. We wasn’t competing. They was living in the paint. Like that’s not who we are. Gotta do a better job. Me and Brook and Bobby (Portis) and all the bigs and people gotta keep the guys in front of us. We cannot expect that Brook is going to be there all night for us and protect us. I think we were just a step behind. We cannot give them open 3s and also allow them to live in the paint. We’ve got to do a better job of protecting the paint. The paint is our house. We didn’t do a good job tonight.”

While the Lakers scored in a multitude of ways throughout the game, their offensive outburst in the final quarter was built on a single play: the game’s most prominent two-man action, a pick-and-roll, with their two best players run in a unique spot on the floor.

Rather than spread the Bucks out, the Lakers put this pick-and-roll in tight quarters in the corner of the floor. James, typically in the left corner, worked his defender inside the 3-point line before catching the ball and waiting for a screen from Davis. And rather than turning it into a quick-hitting play that might take the Bucks by surprise, James methodically pivoted inside the 3-point line and helped Davis create the slightest angle for either play to gain an edge on their defender and score in two dribbles or less.

On the first possession, James created an advantage for Davis and when he lobbed the ball near the rim, Wesley Matthews committed an off-ball foul. On the inbounds play, the Lakers ran it again and nine seconds later, the Bucks knocked the ball out of bounds after James missed an easy look at the rim and Davis kept the offensive rebound alive. Inbounding from nearly the same spot, the Lakers ran it again.

With James catching the ball inside the 3-point line and Davis setting a screen in such tight quarters, help defenders cannot make an impact on the play and that is part of the beauty of the snug pick-and-roll.

If James is throwing that pass from behind the 3-point line and Davis is rolling from farther away, Middleton may be able to help off Westbrook in the dunker spot, but this gives him no chance to help as James, one of the greatest passers of all-time (who, during the game, passed Lakers legend Magic Johnson for career assists), threads the bounce pass threw a tiny space to Davis for the quick finish. George Hill was probably further from Austin Reaves on this play than Budenholzer would prefer with the Bucks’ defensive scheme this season, but he doesn’t affect James in the slightest. Grayson Allen and Troy Brown Jr. might as well be in a different state with the effect they have on the play.

“You have two Hall of Famers running the pick and roll,” Antetokounmpo explained after the game. “It’s obviously hard to stop, especially when you know the guy that’s coming out of the pick-and-roll is one of the best players to ever play this game and the guy that is going to roll is probably one of the best lob threats and big men in the league. It’s just two-versus-two, pick-and-roll game.”

Before James went to the bench with 7:10 remaining, the Lakers ran the snug pick-and-roll action three more times. The Bucks kicked one of his passes to stop a promising look at the basket, James scored on a fadeaway jumper over Wesley Matthews and then Matthews forced a stop as James drove baseline and hurried a shot through contact. When James returned to the game with 6:10 left on the clock, Lakers coach Darvin Ham went right back to it.

While Matthews and Antetokounmpo were asked to cover it during the first stint at the start of the fourth quarter, now the Bucks had Holiday and Lopez on James and Davis.

Holiday and Lopez did well on this first possession, but the snug pick-and-roll puts Davis so close to the basket on his roll that he snuck inside Bobby Portis on the backside for an offensive rebound when Lopez contested James’ shot.

“It’s tough,” Lopez said. “Obviously, they’re two incredibly great players. But Bron is so good at making plays in general and now, that pick-and-roll, he’s such a willing passer, but able to score that it makes it difficult to play both. And then they’re both so big and it’s so deep, it’s a tough play.”

With James’ close attempt at the rim on the first possession against Lopez and Holiday, the Lakers went right back to it on the next possession.

And James finished over the top of Lopez. On the next possession, Holiday went out of his way to get over the top of the screen and force James to the baseline. But it didn’t matter as James read the shaded defense from Holiday and the baseline help from Lopez and Davis — 29.2 percent 3-point shooter on the season and 30.3 percent 3-point shooter for his career — hit a back-breaking 3.

“The physicality, LeBron can get to spots that are tough,” Budenholzer said of the Lakers’ snug pick-and-roll. “We threw several different looks at them. When Davis hits the two second-half threes, one of them out of that environment, that was probably something that — just based on what’s happened so far this year — that’s probably not a bad situation, but he knocked it down.”

Knowing what was coming, the Bucks overplayed the initial entry pass and kept James from even catching the basketball, but Davis was already rolling and just turned that into an isolation opportunity for himself against Lopez.

“I think sometimes it’s so low that they have an advantage, especially with me out there,” Holiday said. “They just kind of throw it over the top. I think that we tried to switch it up and give them different looks. Sometimes we try to down it. Sometimes we try to go under but sometimes it’s so low, you can’t really go under that screen. But again they executed really, really well.”

The Lakers went to the snug pick-and-roll one more time in the final two minutes, but James settled for a baseline fadeaway jumper that he missed to give the Bucks a chance to tie the game late, but it didn’t work out as the Bucks didn’t execute quite well enough offensively to keep pace with the Lakers. Those missed shots are easier to remember, but it was the Bucks’ defense that let them down on Friday night against the Lakers.

To be clear, James and Davis did not reveal a blueprint to beating the Bucks’ defense this season with their snug pick-and-roll. Executing such a play requires one of the league’s best playmakers in tight spaces and a spectacularly talented lob threat, so this will almost never be a problem for the Bucks on a night-to-night basis, but it was an extremely difficult problem for the Bucks to solve for one night and they could not find a way to slow it down in the final quarter. Even if it came at the expense of a loss in the standings, it should be the type of test that will make the Bucks better going forward and sharper come playoff-time.

Buha: Anthony Davis puts on a show and Lakers make statement against Bucks